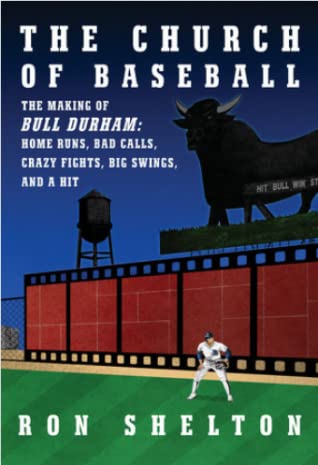 “Bull Durham” ranks as a great sports film because, like the best baseball games, it transcends sport. More than a baseball movie, “Bull Durham” endures as a classic romcom with the backstop as backdrop. If you want to persuade some sports-sneering snob to watch it, tell them it’s also a remake of Lysistrata, the Aristophanes comedy about Greek women withholding sex to stop a war.

The Church of Baseball, a new memoir from filmmaker Ron Shelton, recounts the making of “Bull Durham,” the film that established Tim Robbins and Susan Sarandon as major stars and affirmed Kevin Costner as an actor on The List, a secret ledger of names, like Tom Hanks and Sandra Bullock, that studios build films around. More on that later.

Shelton played minor-league ball. He met a lot of characters and heard a lot of stories, including one about a guy named Steve Dalkowski, a minor-leaguer who supposedly threw harder than anyone in the majors but never got there, owing to a confluence of control problems and drink. Shelton came to admire the poignant perseverance of players who ran out entire careers in the minors, earning peanuts, playing in insufficient light, loving the game more than it loved them. He looked up lists of minor-league stars, guys who hit 50 doubles in a year or 200 dingers in a decade. He found the name “Crash” Davis.

Lots of executives said no to Shelton and his film. Then he walked into a meeting with Thom Mount, the former Universal studio head. “He knew Lysistrata and he knew the infield-fly rule — that’s a small group to find in Hollywood — and he owned a piece of the Durham Bulls baseball team in the Carolina League,” Shelton writes.

Shelton was a first-time director and didn’t yet have a story. “What I did have was three characters who had been living in my head for all the years since I left baseball,” he writes, continuing:

“Each was a composite, an archetype, and if I was lucky, an original at the same time. I figured that if the tale was about a ménage à trois, it wouldn’t come across as a baseball story. I determined that if the woman was sleeping with one of them but the other one was the right guy, well, you didn’t have to understand the infield-fly rule to connect with the drama. If it sounds calculated, it was.”

Shelton told Mount his film would have “a pitcher and a catcher and a woman, and she’s sleeping with the wrong one.” In the script he eventually delivered, a sultry, bookish woman of a certain age hooks up with a young phenom as her lover for the length of the minor-league season. She is Annie Savoy, played by Sarandon. He is “Nuke” Laloosh, played by Robbins. Annie pointedly chooses Nuke over Crash Davis (Costner), a journeyman catcher hired by the Bulls to ready Nuke for the majors.

Annie reads Walt Whitman in bed. So does Crash, a character clearly modeled on Shelton. They are perfect together. But Annie has chosen Nuke, and her decision stands. As the season unfolds, Crash and Annie learn that they share the job of preparing Nuke for the big leagues — Crash on the field, Annie off.

The Lysistrata twist comes when Annie persuades Nuke, struggling with his command, to abstain from sex until his team loses a game. Then, of course, the team embarks on an historic winning streak. Annie finally tires of abstinence, but Crash encourages Nuke to remain chaste, scheming to keep the couple apart.

No one involved in the film is likely to admit this now, but studio executives argued against Robbins for the role of Nuke, and Shelton favored Laura San Giacomo for Annie. Sarandon wanted the part, but Robbins didn’t want her. The problem was The List.

“Every studio, network, or financing agency has one,” writes Shelton. “The List consists of the names of actors or actresses who are acceptable for the lead role because they are either bankable on their own or, in some combination with other co-leads, are bankable enough. Kevin Costner was soon to become such a big star that the co-lead part could be an unknown, but he wasn’t there yet.”

Charlie Sheen, a List-worthy actor, passed on the role of Nuke. Someone at the studio wanted Anthony Michael Hall, the lovable geek from “Sixteen Candles,” but Hall made clear to Shelton that he wasn’t motivated. Robbins won the role by demonstrating a quick chemistry with Costner. Sarandon then announced she was flying to Los Angeles whether the studio wanted her or not.

“This was an Annie-like move, which we appreciated, motivated by discovering she wasn’t on The Damn List,” Shelton writes.

“Bull Durham” emerged as a lusty romantic romp and a sports movie for the ages: one of the only great sports movies, in fact, scripted to appeal to women as much as to men.

Surely no other sports movie spawned so many scenes that any diehard baseball fan can recall: Crash telling a hitter what Nuke is going to pitch after Nuke shakes him off. The rambling mound convention about cursed gloves and wedding gifts. The standoff between Crash and the ump that ends with Crash uttering one of George Carlin’s seven dirty words. Crash getting Nuke to throw a pitch at the mascot, then telling the batter, “Next one might be at your head.”

And Crash’s famous speech, delivered to Annie when she chooses Nuke over him. Shelton quotes from his original script:

“I believe in the soul, the cock, the pussy, the small of a woman’s back, the hangin’ curveball, high fiber, good Scotch, that the novels of Thomas Pynchon are self-indulgent, overrated crap. I believe that Lee Harvey Oswald acted alone. I believe there should be a constitutional amendment outlawing Astroturf and the designated hitter. I believe in the sweet spot, soft-core pornography, opening your Christmas presents Christmas morning rather than Christmas Eve, and I believe in long, slow, deep, soft, wet kisses that last for three days. Good night.”

The Church of Baseball should probably wind up on the syllabus of every film school in the country. In it, Shelton delivers a primer on the absurdist business of Hollywood filmmaking and on the art of narrative storytelling. His book glides along its own narrative arc as Shelton overcomes one seemingly insurmountable obstacle after another, each time leaving the reader breathless at the sheer improbability that “Bull Durham” got made at all. I highly recommend it for fans of the film, storytellers, and those who’ve thought of naming their children Crash and Nuke.