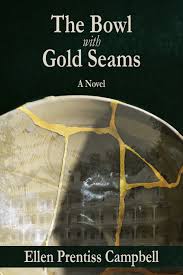 This beautifully structured debut novel magnificently conjures two slices of time some 40 years apart. The frame of 1985 embraces the novel’s inner heart, set in 1945. Events in both years are life-changing for Hazel Shaw, a young high-school graduate living in Bedford, Pennsylvania, as World War II ends. Four decades later, she is the pressured head of the Clear Spring Friends School in the Washington, DC, suburbs.

Hazel had recently married when she was employed at the Bedford Springs Hotel during its service as a U.S. government detainment center for Japan’s ambassador to Berlin, his staff, and their families. However, the cessation of communication from her husband, Neal, who had joined the army and been sent overseas, suggested his death or imprisonment. Tracing the significant challenges in Hazel’s life as a child and young woman, the 1945 section of the book is a splendidly woven coming-of-age tale, replete with insights into life in a Quaker community.

Author Ellen Prentiss Campbell explores the situation of the Japanese detainees with great care and imagination, detailing the contours of their confined, isolated, and fearful lives. Their fate is not clarified until Japan capitulates after the bombings of Hiroshima and Nagasaki.

Young Hazel, a witness to the detainees’ suffering, does what she can to make their lives easier; for example, arranging for Japanese books to be brought to the hotel. She befriends precocious Charlotte Harada, the 13-year-old daughter of a Japanese father and English mother. Charlotte is twice displaced, as she does not fit comfortably into the Japanese world.

When Hazel learns that her husband — her lifelong friend from the Common School in Bedford — is dead, she feels betrayed and betrays in turn, presenting her body to the proud and conflicted Mr. Harada. The Harada marriage has failed, and his wife wishes to return to England with Charlotte so that they both can be repatriated there.

Harada, hurt and enraged by his wife’s decision, succumbs to Hazel’s sexual provocation — and soon after commits suicide. Harada leaves a gift for Hazel, the valuable bowl whose image provides the book’s title. And he leaves her this thought: “What is broken is also beautiful.”

Though the portrait of young Hazel is compelling, Campbell explores the older version of Hazel first — and last. In 1985, middle-aged Hazel is in charge of a Friends school in the DC suburbs. She is a caring and competent administrator whose budget is fragile.

Soon, a scandal threatens to rock the school. The most promising of Hazel’s young teachers, a black man from the Ivory Coast named Jacques Thibeault, is accused of molesting a female student. The girl’s father, a major contributor to the school, demands that Jacques be fired. However, Hazel and others suspect that the troubled girl is lying. The pressures on Hazel to fire Jacques or accept his resignation are enormous. She wants to take the moral high road, but that stance is likely to put the school in jeopardy.

At a Quaker educators’ conference on Capitol Hill, Hazel unexpectedly runs into the now-grown Dr. Charlotte Harada Bledsoe, on sabbatical from her position at Oxford. Their reunion quickly leads to an inevitable decision: They will travel together to visit the Bedford Springs Hotel.

And so, after the middle section of the novel, focusing on 1945, we join Hazel and Charlotte on that shared adventure in 1985. The hotel is not the same as it was in the 1940s, yet much remains familiar. Campbell provides vivid renderings of the two women’s contrasting recollections and impressions, using their conversations to explore the boundaries of identity formation and mutual understanding.

To Charlotte, Hazel will eventually reveal what has been her deepest secret. And yet the women, linked in so many ways, remain accidental interlopers in one another’s lives. The stories Campbell tells in this relatively short novel have a lyrical glow; their suggestive details reverberate. Over and over again, her images do the double task of enhancing verisimilitude and extending into complex feeling/tones of yearning and sorrow.

The book is populated by a series of remarkably well-drawn characters who fit the times and places of the plot, including the wartime government supervisor of the hotel (Hazel’s boss) and Neal’s loyal friend Joe, who keeps his promise to protect Hazel while Neal is at war even when Joe realizes that she may not be worthy of his efforts.

The Bowl with Gold Seams is not captured fully by the label “historical fiction,” though it is certainly that. It conveys a shimmering sense of intimacy and an awareness of brokenness on personal, family, community, and even national levels. It moves toward a closure that is not forced or fully realized, and that tentativeness is one exquisite note among many.

Campbell’s novel is a startling success, and so is its publisher — the student-staffed Apprentice House Press, a program of Loyola University Maryland in Baltimore.