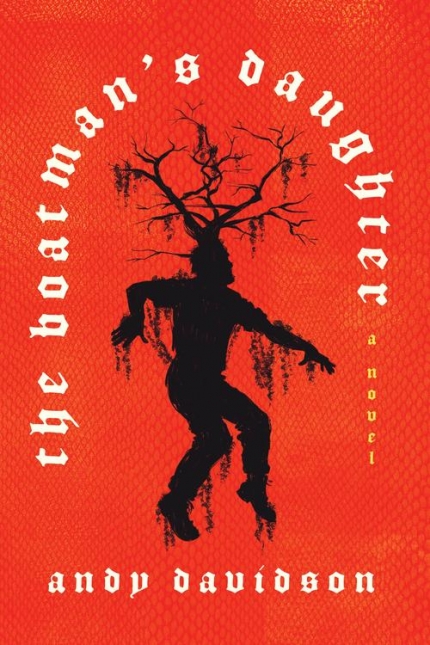 Andy Davidson’s second novel, The Boatman’s Daughter, begins with a deluge of biblical proportions. “The storm poured down ruin on the land. Indeed, it was a storm the people of Nash County, Arkansas, would remember for years to come. It raged like a thing alive.”

In the midst of the tempest, Miranda Crabtree and her father ferry a witch and something unknown, wrapped in a pillowcase, from the home of mad preacher Billy Cotton, whose wife has just died in childbirth.

The witch directs them to an unfamiliar island in the bayou. Miranda’s father and the witch disappear into the woods, but when Miranda follows in the downpour, she finds only her father’s flashlight, warm shotgun shells, and a newborn boy with webbed fingers and toes.

Ten years later, her father’s body has never been found, and everyone who can afford to has since left Nash County. Miranda has adopted the baby: “Burping him in her arms, the rough texture of his skin. That long dark summer, she had surrendered her heart completely.” Together with the witch, Iskra, she raises the boy in isolation on the witch’s island.

Miranda, whose own mother died when she was 4, supplements the meager income from the mercantile shop her father owned by running drugs upriver with a man named John Avery, who manages a greenhouse.

The greater portion of the novel’s action is structured by Avery and Miranda’s last drug run, after which Avery hopes to leave town with his wife and baby. As it turns out, the final run includes not only canning jars packed with dope, but a young girl who is to be delivered to the old preacher Cotton, now descended further into madness.

Much like in Davidson’s debut, In the Valley of the Sun, the gothic, magical horror elements of The Boatman’s Daughter come second to, and build upon, a darker, realistic depiction of violence — the first chapter begins with a man named Cook who alludes vaguely to his refusal to traffic a girl to Cotton before Cook is killed by bikers involved in the trade.

Because the truly fantastical horror elements take time to emerge and only ever involve a portion of Davidson’s cast, men like a corrupt constable, John Avery, and even Billy Cotton read like the darker characters from the first season of “True Detective,” a show with which Davidson’s novel shares the humid, hazy, vine-draped setting of the American South.

Slowly, the horror arrives. Davidson never gives too much away too quickly, and rarely over-explains the magic on the bayou that his characters are aware of but barely understand. Of the two sorts of evil at play, the “natural” evil of corrupt, violent, and misogynistic men is far less ambiguous than the powers of the witch and leshii, a spirit which the author perhaps drew from a myth involving a Slavic forest deity.

This magical element is somehow connected to the witch’s past in a place “a long way” from Arkansas, “in miles, in years.” As the sordid connections between Billy Cotton, Miranda, and the abandoned infant become clear, it appears these two forces are often at odds: men against magic.

“Men look after men,” the witch tells Miranda. One of the novel’s twists, when it comes, is therefore attributable more to the witch’s very human instincts for motherhood than anything supernatural.

The Boatman’s Daughter is published by MCD x FSG Originals, an imprint launched in 2017 to “experiment” with books “at the edges of FSG’s traditions,” and the novel clearly teases the supposed line between literary fiction and horror. The characters here are fully fleshed and dynamic, even the relatively minor ones like John Avery. Only Avery’s wife, the least-developed of the bit players, seems a touch contrived.

Miranda struggles against the two types of evil while at the same time engaging in a process of self-discovery, especially when it comes to found family:

“It was a rhythm they had fallen into over the year: in place of words some task, and out of the silent motions of that task — the shelling of fresh peas, the gutting of fish — the old woman and Miranda had fashioned the peculiar language of family.”

Chapters decrease significantly in length as the action intensifies, pulling the reader from scene to scene without whiplash. The novel’s climax and afterword suggest that the two evils, natural and supernatural, are connected. It may even be that the latter determines the former, rotting the land and the men on it.

The writing is descriptive, rich, and enhances the action rather than restrains it. A few tics, like a penchant for splitting sentences with italicized interjections, supposedly giving us a character’s thoughts (“Something small and clawed and menacing — boy, monster, a by-God devil! — dropped down in the open door”), are more trouble than they’re worth.

Still, The Boatman’s Daughter is even better than Davidson’s very good debut, which was a finalist for the Bram Stoker Award. This second effort — a frightening, sticky, damp story of the bayou — certainly delivers on the promise of the first.