The Bad-Ass Librarians of Timbuktu: And Their Race to Save the World’s Most Precious Manuscripts

The triumph of art and literature over Al Qaeda 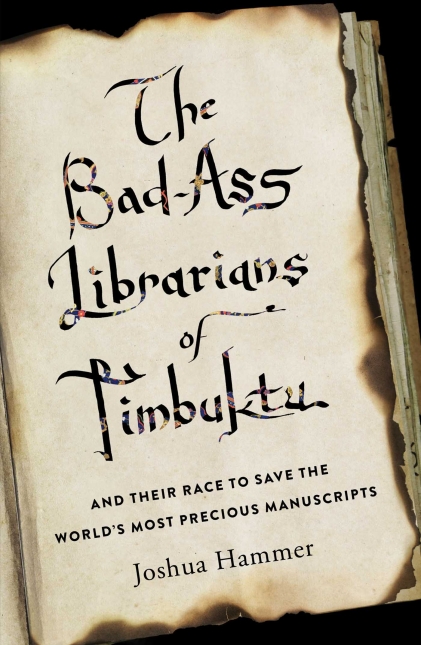 Joshua Hammer exposed my ignorance. Without thinking about it, I had accepted the conventional wisdom endorsed by luminaries such as David Hume, Immanuel Kant, and Georg Wilhelm Friedrich Hegel that Africa had no indigenous system of writing, no historical memory, and no civilization. But The Bad-Ass Librarians of Timbuktu provides irrefutable evidence that culture and learning in Africa were far more advanced than in Europe by the 16th century when Timbuktu flourished as a center of learning.

The town was founded in the 11th century by a clan from the Tuareg tribe who established a summer redoubt on a congenial spot they found on a tributary of the Niger River. When they moved to their winter grounds, they left their heavy luggage in the care of a woman they named Bouctou, “the one with the big belly button,” and referred to the settlement as Tin-Bouctou, the well of Bouctou.

By the 14th century, Timbuktu had become a thriving metropolis and trading center and had begun to emerge as a place of learning and culture. Visiting scholars had brought Korans, the Hadith (the pronouncements of Mohammed compiled by his companions), inquiries into Sufism, and works of the Maliki school of jurisprudence. The copiers went to work producing thousands of illuminated manuscripts — surveys of algebra, trigonometry, physics, chemistry, and astronomy. They translated into Arabic the works of Ptolemy, Aristotle, Plato, Hippocrates, and Avicenna, a Persian philosopher and scholar.

These collected works made clear, among other things, that Islam as practiced in the Maghreb was a tolerant, liberal faith, so unlike the severe cult of the 18th-century preacher Muhammad Abd Al Wahhab, the originator of Wahhabism, who declared holy war on Shi’ism, Sufism, and Greek philosophy. The jihadists of modern history draw their inspiration from Al Wahhab.

The history of Timbuktu is divided between periods of peaceful prosperity, when learning flowered, and times of war between clashing empires which brought destruction and devastation. The French conquered and colonized what is today Mali, with Timbuktu at its center, during the 1880s. Because the conquerors seized manuscripts and carried them off to Paris for study and translation, locals resorted to hiding them.

“They placed them inside leather bags and buried them in holes in their courtyards and sealed the doors of their libraries with mud to hide the treasures inside.” Thus solidified a tradition of preservation through concealment that would continue to the present.

Abdel Kader Haidara, a young Malian scholar and resident of Timbuktu, found himself at the center of the manuscript-conservation effort when his father, Mamma Haidara, an illustrious scholar and custodian of thousands of manuscripts, named the younger Haidara as his successor.

The young man signed on as a manuscript prospector for the Ahmed Baba Institute in 1984. His job was to travel the countryside to encourage manuscript owners to entrust their treasure to the institute for protection and preservation. After nine years and greatly enriched education on the manuscripts, their value, and their preservation, Haidara resigned from the institute to turn his full attention to his own collection and create a private library of 40,000 manuscripts in his family’s possession.

Meanwhile, jihadist groups under the influence of Osama Bin Laden, were coalescing in North Africa. Three men emerged over time to lead the movement.

The first, destined to become a leader of Al Qaeda in the Islamic Maghreb (AQIM), was Mokhtar Belmokhtar. He traveled to Afghanistan, where he came under the influence of various mujahideen leaders and returned to Algeria. There he joined the Armed Islamic Group of Algeria, a brutal militia fighting to replace the government with an Islamic state. In the late 1990s, Belmokhtar turned to smuggling and made his fortune.

The second was Abdelhamid Abou Zeid, who began his career as a smuggler. In the 1990s, he joined the Armed Islamic Group of Algeria and rose through the ranks with a reputation as a rabid ideologue and merciless killer.

The third was Iyad Ag Ghali, a Tuareg tribesman. He led a Tuareg insurgency aimed at establishing an independent nation to be called Azawad and, when a truce was signed with the Malian government, became a member of the government as a security adviser to the president but continued his connection with the rebels.

These three became connected with jihadi movements with a variety of names who financed their operations by drug smuggling and ransoms from Western governments for kidnapped hostages. The best known was the Salafi Group for Preaching and Combat, which merged with Al Qaeda in 2006 and changed its name to Al Qaeda in the Islamic Maghreb.

By 2011, Abdel Kader Haidara had turned his private library into one of the world’s most innovative manuscript-conservation centers and a symbol of Timbuktu’s cultural renaissance. But at the same time, jihadism was spreading across northern Africa.

In November 2011, Belmokhtar and Zeid, by that time the two commanders of AQIM, already allied with Boko Haram, Nigerian jihadists, joined forces with Ghali and his Tuareg rebels. Together, they seized Timbuktu in March 2012. Strict Sharia law enforcement followed together with public whippings, stonings, and amputations. Sufi shrines were destroyed. Haidara knew that the burning of his beloved manuscripts would soon follow.

Thus began a silent movement, first to hide, then to sneak out of Timbuktu, the hundreds of thousands of manuscripts Haidara and his colleagues had so carefully gathered and preserved. In a 90-day period, Haidara and his co-conspirators evacuated 270,000 of the 377,000 manuscripts, mostly to Bamako, the capital of Mali. In complete secrecy, they moved their contraband by car and on foot. More than once, they were halted by jihadi police or Malian army troops, but no manuscripts were confiscated or destroyed.

Then, in January 2013, France launched Operation Serval, with the goal of driving AQIM out of Mali. Haidara knew the enraged jihadists would likely turn their attention to destruction. A total of 791 footlockers containing 100,000 manuscripts were still hidden in safe houses in the city.

With roads sealed from civilian traffic, Haidara resorted to transportation he had heretofore avoided because of the danger to his precious treasures: boats on the Niger River. Mule carts carried the footlockers through rice paddies and vegetable fields too narrow for cars. Village chiefs along the way opened their homes for temporary storage. The manuscripts were loaded in pinnaces — 30-foot-long watercraft — each carrying 15 metal chests filled with manuscripts.

On January 25, 2013, the AQIM jihadists entered the Ahmed Baba Institute and burned 4,202 manuscripts before escaping the French by fleeing into the desert. But they left behind 10,603 restored manuscripts they didn’t know were hidden in the basement of the building.

In the end, Haidara and his partners saved nearly all of the manuscripts by dint of stealth, devotion to their heritage, and naked courage.

“Timbuktu had been the incubator for the richness of Islam,” Hammer writes, “and Islam in its perverted form had attempted to destroy it. But the original power of the culture itself, and the people, like Haidara…had saved the great manuscripts in the end.”

Tom Glenn spent the better part of 13 years under cover in Vietnam supporting U.S. Army and Marine combat units and escaped under fire during the fall of Saigon after the North Vietnamese were already in the streets of the city. He is the author of three novels and 16 short stories. The Naval Institute Press will publish his fourth novel, The Last of the Annamese, next year.