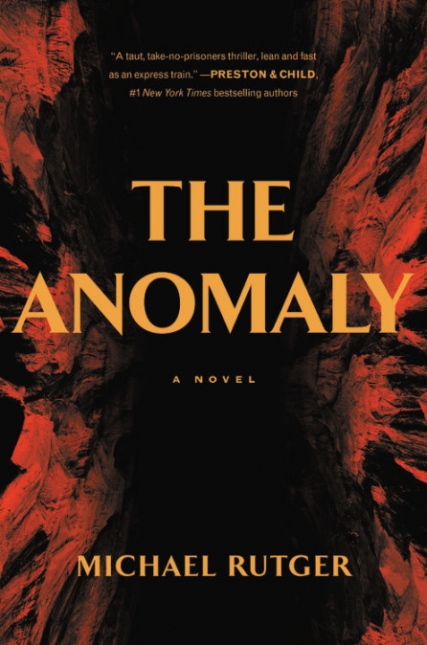 Who is Michael Rutger? The book jacket identifies the author of The Anomaly as a screenwriter but includes no references to film projects or previous publications. Clues to the author’s identity are sprinkled throughout the book, such as his use of authentic British name-calling — “tosser,” for instance, which is by far my favorite.

The more revealing tell-all, however, is that this thriller is too cleverly plotted and the characterizations too finely tuned to be a debut novel.

A search reveals the author’s real name is Michael Marshall Smith. He is British and has published novels and short-story collections both under his full name and Michael Marshall, as well. In addition to his fiction output, which has garnered awards, Smith/Rutger has collaborated on TV and big-screen movies in sci-fi, thriller, and comedy genres.

Why the alias? Perhaps he viewed The Anomaly as a departure from his previous works, but whatever the reason, the novel demonstrates his maturity as a writer. Readers of the thriller genre want a rollercoaster ride of a plot and characters they can identify with. The Anomaly offers all of this and more.

Protagonist Nolan Moore is a failed screenwriter turned would-be Indiana Jones whose ambition is to take his online treasure-hunting show to television. His major accomplishment thus far has been to remind viewers of “The Anomalies” that it’s the search that counts, and not whether you find fame and fortune.

His record of failures, however, is about to end when his crew enters the Grand Canyon seeking the entrance to a cavern that reportedly houses relics found nowhere else on earth. Moore’s source is a set of century-old explorer’s notes that no subsequent searchers have been able to replicate.

Joining the core team — Moore, his producer, Ken, photographer Pierre, and manager-of-all-trades Molly –– are a haughty web-based journalist and a hippie-ish representative of the foundation that’s financing the venture.

The dysfunctional group dynamics displayed as the crew embarks on its journey don’t prepare us for the unexpected, horrifying consequences of their finding the cavern. Nor do they prepare us for Moore’s justifications for pursuing the unknown no matter the cost. A comedy of mediocrities turns into a can-we-make-it-out-alive tale where none of the actors play to type.

The author brings the reader into the story step by step until we realize it’s our story, too: “Things you’ve done, mistakes you’ve made, secrets you hold –– the guilt you carry for moments that stick out in your past like black stars in the firmament of your inner life. The outlier occurrences. The anomalies.”

Engravings and illustrations from various archeological mysteries, which are interspersed throughout the book, contribute to the intricacy of the plot, but a map of the cavern would have been even better.

A movie version of The Anomaly is sure to follow. In the meantime, let’s hope Smith/Rutger isn’t finished mining external and internal anomalies.

The author of six thrillers, Peter G. Pollak is working on an epic fantasy. Learn more at petergpollak.com.