Sweet in Tooth and Claw: Stories of Generosity and Cooperation in the Natural World

How species benefit by working together. 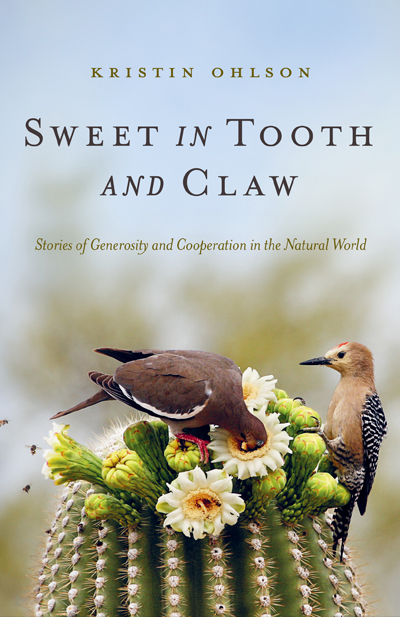 Call me naïve. I was expecting a different type of read when a copy of Sweet in Tooth and Claw came across the transom. Its subtitle, Stories of Generosity and Cooperation in the Natural World, led me to believe the eight chapters would be laden with charming yet simplified tales, such as of how red-billed oxpeckers and impalas in South Africa benefit one another. (By picking ticks, fleas, and lice off the impalas, the birds gain a tasty meal and free the mammals of harmful parasites.)

Thankfully, author Kristin Ohlson instead takes a deep, stimulating, and nuanced dive into the world of mutualism. Evidently needing a dose of optimism during these environmentally alarming times, she interviews scientists seeking to restore depleted land and water by observing and encouraging the beneficial interactions they view as Earth’s cooperative safety net.

The book’s title is a clever twist on the Alfred Lord Tennyson poem “In Memoriam A.H.H.,” in which he references nature as “red in tooth and claw.” That perceived harshness is not necessarily so, Ohlson argues. She then offers readers a valuable history lesson by explaining that Charles Darwin’s painstaking studies laid out in On the Origin of Species mistakenly earned the “survival of the fittest” tagline that dominated 19th-century (and beyond) scientific thinking.

It’s only within the last two decades that “a guy most of us have never heard of” has been rediscovered and lauded by scientists for presenting a radical notion during his time — that natural selection could favor cooperation. That “guy” was Russian anarchist and scientist Peter Kropotkin, who toured North America twice before his bestselling book Mutual Aid: A Factor of Evolution was published in 1902. He died in 1921.

A contemporary of Darwin’s, Kropotkin feared the Englishman’s writings might be misconstrued, thus encouraging an overly harsh view of life. He wrote that Darwin intimated “the fittest are not the physically strongest, nor the cunningest, but those who learn to combine so as mutually to support each other, strong and weak alike, for the welfare of the community.”

Ohlson opts to embrace that sweeter side. She takes readers on tours of diverse habitats in her home state of Oregon, as well as Nevada, South Dakota, British Columbia, Paris, and Mexico, to tell the stories of the farmers, biologists, and ecologists passionate about the relationships they are deciphering.

For instance, Ohlson tromps into a research forest to quiz University of British Columbia ecologist Suzanne Simard about her Mother Tree study that hopes to uncover which logging practices maximize long-term forest and climate health.

Ohlson beautifully captures the complexity of such an undertaking by explaining that the trees and fungi networks “are all whispering to each other in chemical sentences, giving to the forest community and taking from it in ways scientists may never be able to figure out.”

The author is worthy of her English degree with that sentence alone. But Ohlson clearly has the chops to hold her own on the science front, too. Her first book, The Soil Will Save Us: How Scientists, Farmers, and Foodies are Healing the Soil to Save the Planet, also challenged mainstream thinking.

What’s refreshing and, frankly, uplifting is Ohlson’s non-treacly pursuit of people seeking solutions. Bookshelves are already laden with tales of planetary gloom and doom that are, no doubt, scientifically accurate but also contributors to paralysis and hopelessness. At the core of Ohlson’s exploratory journey is her role as that trusted friend who can help humans of all stripes comprehend how cooperation within and among species undergirds a thriving natural world.

“How might our behavior change if we understood [that]?” she asks in a query that subtly invites readers to embrace new thinking and a sense of wonder. “Could we begin to see ourselves as partners and helpers, part of a greater fabric of giving, instead of exploiters and colonizers and wreckers?”

Her storytelling is at its most vivid when she relays lessons from on-the-ground visits. One such chapter reveals how ranchers, scientists, and government agencies started listening to each other in northeastern Nevada to restore wetlands that had dried into deserts. Two keys? Reining in grazing cattle and giving beavers free rein.

Another chapter begins on a promising note, with the “ridgetop” story of two Oregonians intent on healing private, logged-over land near the Pacific Ocean by providing the clean, clear, cold water salmon count on for feeding and breeding. This chapter’s “reef” portion, unfortunately, though chockablock with facts and insights, is cluttered and far less compelling because it lacks a sense of place.

The same goes for the book’s final chapter. While Ohlson’s urge to include a mention of city landscapes is understandable — most humans are urban-dwellers and constitute a hulking presence everywhere — this is fodder for a separate article or even another book.

Ohlson charms, however, in a chapter on regenerative agriculture. Investigating what’s essentially chemical-free farming allows her to don her soil-wonk hat and also poke fun at herself when she obliviously rents a two-door vehicle, sight unseen. An interviewee questions the author’s eco-credentials when she roars into a South Dakota experimental farm in the rental — a gas-guzzling Dodge Charger that’s a dream ride for many a teenage boy.

Despite this, Ohlson’s time on the farm is well spent, especially when she recounts the enthusiasm of Mike Bredesen, who fled life on a conventional farm for college and a plan to attend medical school. That lasted until he landed a summer job with an entomologist pursuing holistic agriculture.

“Jeez, I never saw anything so interesting in my life!” Bredesen tells Ohlson about digging in soil. “There are alliances and wars being waged beneath our feet on a daily basis…Humans are way less interesting than this.”

Now, Ohlson reports, Bredesen is eager to earn his doctorate and be a farmer. Or, as he more aptly terms it, a “steward of the land.”

Elizabeth H. McGowan is a Washington, DC-based energy and environment reporter whose work appears in an array of publications. She has won numerous awards, including a Pulitzer Prize in 2013 for “The Dilbit Disaster: Inside the Biggest Oil Spill You Never Heard Of” as a staff correspondent for InsideClimate News. Bancroft Press in Baltimore published her memoir, Outpedaling ‘The Big C’: My Healing Cycle Across America in 2020. Find her on Twitter and Facebook.

Jimmy Buffett: A Good Life All the Way