Strong action and images can’t overcome the weaknesses in this ambitious work. 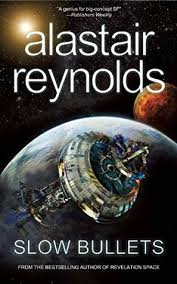 The last thing Scurelya "Scur" Timsuk Shunde remembers is cutting a “slow bullet” out of her leg. She should be dead. Instead, she and the other dregs (prisoners) wake from their hibo capsules on the prison skipship Caprice. Her vessel doesn't know where it is in place or time. Neither do the other prisoners or crew. They are "a shipful of headaches for the peacetime administrations" following a massive interplanetary war.

Scur's nemesis, Orvin, the man who shot her, is also aboard, and he isn't taking orders from anyone. Against this backdrop, Caprice's systems are failing. The prospects of being stranded in orbit around an unknown planet and facing eventual death are bad enough, but the ruined ship’s systems seem to be losing all that remains of human knowledge, too.

Slow Bullets is an action-packed novel primed with interesting concepts, many of them related to memory. The crew uses storytelling to root out stowaways. Slow bullets are both friend and foe — they can carry all the knowledge a bearer hopes to retain, but they can also kill you by moving through your body and exploding in just the right spot. Confronted with the loss of knowledge stored on Caprice, her occupants write Earth's history on her walls and on their own bodies.

The language keeps the story moving at pace. Images and emotions pop, like when Scur "could feel the bullet moving itself, contracting and extending like a mechanical maggot." For one crewmember, technical details are recalled like a prayer, a "recitation of scientific facts and complications. The words gave him an anchor of calmness, however precarious it might have been."

Unfortunately, all the action and innovative concepts can't overcome the novel’s flaws. Plot advancement is often based on Scur's outbursts, most of which occur without any believable motivation.

Early on, the reader is told Scur would have been a perfectly normal person except for being forced into the military as a result of her parents' political actions. The compulsory service reveals a well of anger so deep that she becomes a relentless killing machine. It just doesn't feel real, either in the abbreviated backstory or during the novel's progression. Partially as a result, Scur's conflict with Orvin feels foolish instead of threatening.

Shifts in the narrative voice also jar. The first third of the book is told in first-person present tense. Later, a far-future narrator interjects and speaks to the generations who have since arrived on Caprice. In the middle of one scene, the narrator asks, "Was it arrogant of us to think we could bear the truth, when the others could not?" followed soon after by "This, more or less, is what happened." This random voice, which is never explained or integrated into the tale, reappears a few more times before the end of the novel.

The tragedy of Slow Bullets is the untold story — that of Murash, a stowaway from the world below. She has trained for years to be the one to board the ship orbiting her world. Yet the author devotes just a few pages to Murash, when her story should have driven the book. Obliquely, Reynolds seems to acknowledge how compelling that story would be. "You may ask of Murash,” he writes, “but there is no need. Her story is elsewhere, in her own hand. I suggest that you read it, if you have not already done so."

Scur says "the measure of our lives would not be in how things improved, but in how quickly or slowly they worsened." Slow Bullets leaps into the action, which is brisk, close, and interesting. But the characters aren't plausible. Dedicated followers of Alastair Reynolds may be able to read past the novel's shortcomings, but others might want to wait for a more developed work.

In this documentary novel Dieter Schlesak exposes Nazi pharmacist Victor Capesius and the monstrous perversion of his profession.