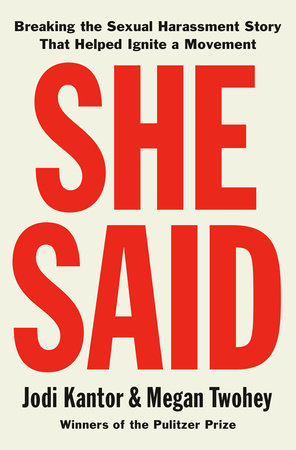 She Said: Breaking the Sexual Harassment Story that Helped Ignite a Movement by Jodi Kantor and Megan Twohey landed with its red title blazing like lipstick smeared on the cracked mirror of a truck stop. Yet, as much as I respect the two New York Times, Pulitzer Prize-winning reporters who bolstered and tracked the #MeToo movement, I hesitated opening their book.

Having watched the bruising Brett Kavanagh hearings, plus nonstop coverage of the sexual plunders of Donald Trump and Harvey Weinstein, I didn’t think I could stomach one more word about their depravities.

In addition, I’d read Ronan Farrow’s three-part series in the New Yorker about Black Cube, the private Israeli investigation firm hired by Weinstein’s lawyer, David Boies, to dig up dirt on Weinstein’s accusers, itself serialized in Farrow’s book Catch and Kill: Lies, Spies, and a Conspiracy to Protect Predators. This came on the heels of James B. Stewart’s excellent reportage in Deep State: Trump, the FBI, and the Rule of Law.

What more did I need to know about the fetid pathology of men hell-bent on sexually abusing women?

The answer lies in Kantor and Twohey’s spectacular book, which takes its title from the futile disputes of “he said, she said,” where there’s no corroborating evidence for either side and, consequently, no bona-fide winner. In point of fact, the winner is usually “he,” and the loser “she,” because “she” has no leverage in the powerful world of “he.”

That finally may be changing, thanks in large part to these investigative journalists, who devoted two years to giving abused women — 80 to date — a voice, helping them crawl out of the emotional cages where most had been cowering, terrified of their powerful predator.

The book provides a platinum primer on investigative reporting as Kantor and Twohey take readers inside their responsible march to publication: It’s a tale of lawyers who vet, editors who edit, and researchers who check and re-check facts while the reporters write and rewrite and rewrite again.

They spend days, weeks, and months searching for contact information — finding relatives, friends, neighbors, and work associates to lead to sources who, initially, balk at being contacted. A few agree to talk off the record but refuse to be quoted by name for fear of retaliation.

After years of terrified silence, most of the women who had lost or left jobs with career hopes dashed — especially those who had signed non-disclosure agreements — saw nothing to be gained by speaking out:

“Actresses, prominent and unknown, had told reporters Weinstein stories and sworn them to secrecy. The pattern that had protected Weinstein for decades — no actress wanted to be the one to speak up and name him — still held.”

Just like cowboys in old TV Westerns: Everyone wanted cover.

Perhaps being women themselves, the two journalists understood why so many victims felt they were somehow at fault for being assaulted by Weinstein. With sensitivity, Kantor and Twohey did not push; they listened quietly, responded gently. “I can’t change what happened to you in the past,” each said, “but together we may be able to use your experience to help protect other people.” Finally, they earned the trust they needed to pursue the story.

That’s when the saga becomes frightening, with dark, back-alley skulks.

Black Cube begins a campaign to intimidate the reporters, trying to push them off their story. The reporters start receiving strange emails and texts from an actor-agent identifying herself as being from an organization in London who wants to talk about gender equality in the corporate sphere. Their executive editor at the Times, Dean Baquet, warns them to assume their communications are being monitored, their tracks followed.

In a sweet aside, the reporters mention a detail about their editor, who insisted their investigation be irreproachable. He had told them that, at the start of his newspaper career, he’d written about a small-time actor who posed as a talent scout to lure aspiring actresses as young as 14 into private meetings and then raped them. Baquet felt his “sensationalized and melodramatic” stories convicted the man in print without a fair defense. “I always felt like everyone in the courtroom lost a little respect for me, including the prosecution.”

Including that story reflects well on the reporters, and more so on their boss, who gives new meaning to Shakespeare’s observation: “They say best men are molded out of faults, and, for the most, become much more better for being a little bad.”

Following Baquet’s lead, Kantor and Twohey low-key everything, even the most lurid details of their investigation. They write with restraint about Weinstein’s young female assistant tasked with procuring and organizing his “personal supply of an erectile dysfunction drug called Caverject, administered through injection into the penis…[She] had to keep a supply of those shots at her desk, hand them off to him in brown paper bags, and sometimes run the drugs to hotels and elsewhere, just before his meetings with women.”

Threads of the Weinstein story had appeared in the New York Times since 2017, but not with the full wallop of this book, which reads like a John le Carré thriller, detailing egregious crimes, a tangled web of clues, frightened witnesses, cover-ups, bribes, threats, double-dealing lawyers, and cash payments in exchange for non-disclosure agreements. She Said makes All the President’s Men look like “Mary Had a Little Lamb.”

When David Boies, who charges $2,000 an hour to be David Boies, tells the reporters he was “unaware” of the Black Cube tactics used against them, you may roll your eyes; when he adds his regret for not paying closer attention, you’ll want to throw up.

But there’s a comeuppance: Because the law firm of Boies Schiller Flexner also represented the Times on certain matters, when the newspaper learned of Boies’ actions, which they deemed “reprehensible,” they fired the firm for “grave betrayal.”

Boies then threw Weinstein, his Hollywood red carpet friend and client of many years, under the bus. Maybe Dick the Butcher was right. “The first thing we do,” he said in Henry VI, “let’s kill all the lawyers.”

Weinstein shrewdly surrounded himself with a highly credentialed crew of female attorneys to protect him, including Linda Fairstein, once renowned in the field of sex-crimes prosecution, and Lisa Bloom, who, upon publication of this book, should’ve packed a go bag and headed for the Azores, where they might not have read the damning memos she wrote to Weinstein, all reprinted in She Said, all showing her avarice, her appalling lack of scruples and basic legal ethics.

Bloom is the daughter of Gloria Allred, supposed defender of abused women, who hovers at their side on cable television and then takes 40 percent of every settlement she negotiates. Kantor and Twohey report that they “didn’t realize, and would never have suspected, that Allred’s firm was sitting on separate records about Weinstein’s [financial settlements], ones that had never come to the attention of the government or the public.” Bloom better pack a bag for Mom, too.

Then there’s Lanny Davis, Weinstein’s crisis manager, who starts his spin by bragging to the reporters about his close friendship with Hillary Clinton, his classmate from Yale Law School. Kantor and Twohey ask him about the sexual assault allegations against Weinstein, which he paid millions to conceal:

“Do you think that’s normal for men to make so many payoffs?”
“I do,” said Davis very matter-of-factly.

A new, unexpurgated volume of the author's diaries.