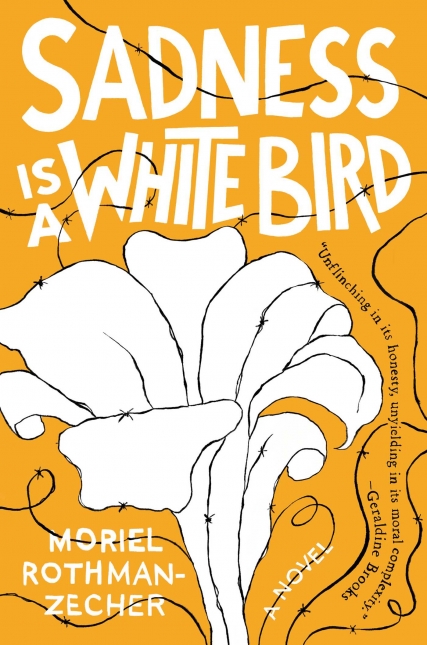 Searing in its beauty, devastating in its emotional power, and dazzling in its insights, Moriel Rothman-Zecher’s debut novel, Sadness Is a White Bird, is, I promise you, like nothing you’ve ever read.

If I’m wrong, you’ve been luckier than I have. His particular vision of today’s Israel, told through a coming-of-age story, will break your heart.

Has this author named himself, or has he grown into his name? After the hyphen, the name translates (from Hebrew) into “memory”; the first name into something like “God is my teacher.” There is something in a name.

The book’s protagonist and narrator, Jonathan, has returned to Israel in his late teens. He looks forward to joining the Israel Defense Force, in part to honor his freedom-fighter grandfather. His life undergoes a radical change after he meets and becomes intimate with Laith and Nimreen — dynamic Arab-Israeli brother-and-sister twins with whom he shares his deepest thoughts.

Can you love and admire people so deeply that the barriers between you are conquered? Will the real world even allow it?

The closer Jonathan comes to his military induction date, the more his various strands of identity are stressed. How can he become a soldier who will be at war with his dear friends’ people? How can he become an agent of their disgrace and humiliation?

For all of their ease with the Israeli brand of Western culture, Laith and Nimreen are, at a deep level, strangers. This is true even though they are the children of Jonathan’s mother’s friend.

The story, told by Jonathan, is presented as if he is addressing Laith. Sometimes, it seems as if he is rehearsing or imagining the conversation; at other times, it’s as if it’s really happening. Occasionally, it’s as though he’s addressing a dead person.

There is almost nothing of Laith responding, yet there are other scenes in which these friends are engaged in three-way conversations that are amazingly revealing.

Jonathan wavers somewhat before fully committing to his required military duty. And he wavers again when pressed into putting down a potentially dangerous demonstration. In the aftermath of the skirmish, Jonathan is imprisoned by his superiors.

The novel sings out in the distinctive voices of Rothman-Zecher’s characters, in their almost palpable presence, and in their hopes and hesitations. The authenticity of the voices is especially strong in the scenes populated by Jonathan’s friends, all serving in or inevitably bound for the IDF.

Rothman-Zecher shows great skill in portraying different neighborhoods, not only in terms of physical characteristics, but also through capturing the cultural and atmospheric dimensions. As an author/narrator, he seems to be on familiar ground. One wonders to what degree the novel is rooted in direct, if transformed, experience.

The growing and finally overwhelming sense of grief that haunts the story grows out of the ecstasy of expectations — Jonathan and Nimreen are lovers whose circumstances thwart a union.

Readers will wonder what hope there is for the productive sharing of Palestine/Israel. As young as they are, Jonathan and his dear friends carry the baggage of difference. It weighs them down. It might weigh all of Israel down forever.

If the title had not already been taken by Daniel Gordis’ If a Place Can Make You Cry (2002), Rothman-Zecher’s novel could well be thought of in terms of that forlorn phrase.

One is left hoping for a miracle. Is one out there?

Jonathan met Laith and Nimreen in the last years of high school. What if they had met much earlier? What if they, and other Israeli-Arab and Jewish children, had gone through school together from the beginning, sharing the process of growing up? What if schools with such an integrated population become the focal point of communities?

Such an effort, begun in 1998, is well on its way to changing the educational and cultural landscape. It is called Hand in Hand. Yet the Center for Jewish-Arab Education in Israel is not a miracle. It is hard work. But it offers a situation in which “Jewish and Arab children attend school together on a daily basis, learning each other’s language, sharing stories, facing and overcoming differences, growing up together” with committed parents fighting to get past the distrust and fear that dooms other initiatives.

Perhaps the tragic vision of Sadness Is a White Bird, intentionally or not, points in that direction. Meanwhile, I have only praise for this poetic, distressingly original book.