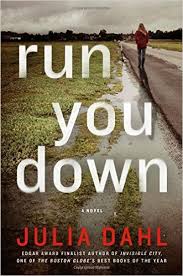 It would be hard for author Julia Dahl to match the impact of her novel from last year, Invisible City, let alone provide a fresh experience with a story that mines a similar milieu: the mysterious death of a woman in New York’s Hasidic community. However, she has done it — in part by having left the door open for a continuation of the earlier work’s underplot: a young woman’s quest to find the mother who abandoned her as a baby.

One would suspect that Run You Down was in development even before Invisible City was published. In the later book, tabloid stringer Rebekah Roberts, a half-Jewish woman raised in Florida by her Christian father, Brian, has taken a step up the ladder at the New York Tribune. She’s doing rewrite, an indoor job, rather than chasing around the city investigating possible stories. Rebekah is also fighting a severe bout of depression in the aftermath of her first major assignment. Her roommate, Iris, is pushing her to get help.

Rebekah meets with her friend Saul, a retired policeman and the one person of her acquaintance (besides her father) who’d known Aviva, her mother. Aviva had contacted Saul about possibly getting in touch with her daughter. Saul passed on the message, but Rebekah’s nerve failed when it came to picking up the phone; too much fear and anger, too many unknowns.

While wrestling with this problem, which is pulling her into a dangerous withdrawal state, Rebekah agrees to meet Levi, a man from the Haredi (extreme orthodox) world. Levi’s young wife, Pessie, has recently died, but he suspects something has gone wrong with the investigation of her death. (Echoing the circumstances in Invisible City, Pessie was rushed to the funeral home without an autopsy being done.)

Levi can’t find out how she died, though Pessie’s family seems to fear that she may have committed suicide — a scandalous act in their community. Rebekah agrees to look into matters. Suddenly, this half-hidden world of the Haredi has become her beat.

But wait, we follow the progress of her investigation only in alternate chapters.

The story is developed through two alternating first-person narratives. It begins with the voice of Aviva, as if speaking to Rebekah after having been reunited with her. She explains her experience after having run away to Florida, and the circumstances that led her to marry Brian.

Later “Aviva” chapters detail her decision to run off again, abandoning Rebekah and returning to New York, but not intending to reunite with her Hasidic parents and siblings. Slowly, her shadowy life is revealed to Rebekah (and to readers).

As happens in small worlds, the investigation of Pessie’s death connects to the cautious efforts of Aviva and Rebekah to dare a meeting. There is so much at stake for each woman, so many reasons for leaving their lives manageable, if unfinished and unfulfilled.

The linchpin is Sam Kagan, Aviva’s much younger brother, whose explosive rebellion against the Hasidic community has put him into contact with a white-supremacist criminal family. He also had a connection to Levi’s wife.

Dahl orchestrates a stunning series of revelations as she maneuvers the reader through the strange duet of two voices, mother and daughter, in search of missing pieces. The author paints her portraits of physical settings and cultural communities with authority and skill.

The tenuous rapprochement between Aviva and Rebekah leaves room for further chapters — or books — to explore what they will come to mean to each other and how their identities will be reshaped as they adjust to being part of one another’s lives.

Haunted by guilt and seeking (and offering) forgiveness, the main characters in this fine thriller are unforgettable. Supplemented by an intriguing and distinctive supporting cast, Run You Down will make Julia Dahl a strong candidate for more accolades like those she received for Invisible City. And more readers, too.

The Judge Hunter: A Novel

What happens when Samuel Pepys' hapless brother-in-law is sent on a snipe hunt to the New World?