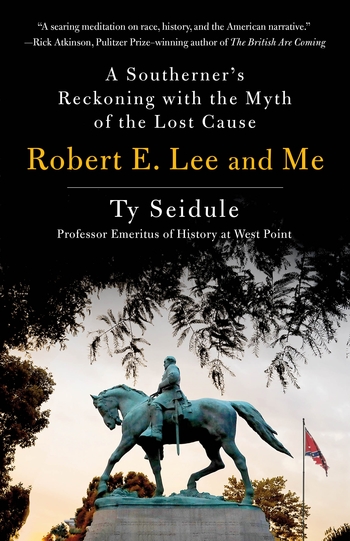 Early in the Civil War, the Union Army seized “Arlington” — Robert E. Lee’s 1,100-acre estate across the Potomac from Washington, DC — and used it to headquarter federal troops. Lee never returned to his home, but he sued his country for damages after the war and collected more than $4 million.

When debate about the property seizure reached the U.S. Senate, Charles Sumner, who led that body’s anti-slavery forces, railed against the slaveholding Confederate general, saying: “I hand him over to the avenging pen of history.” That pen has now been wielded to dazzling effect by Ty Seidule in Robert E. Lee and Me: A Southerner’s Reckoning with the Myth of the Lost Cause.

Few others could write this book with such sterling credibility. Only a man of the South, a Virginian, and a soldier with a Ph.D. in history could so persuasively mount the case against a national hero, and label him a traitor. For even today, the image of Lee, who fought against his country to preserve slavery, is revered with monuments, parks, military bases, counties, roads, schools, ships, and universities named in his honor. Yet, armed with years of documented research, Seidule demonstrates that Lee, like Judas, was guilty of base betrayal.

“It’s an easy call,” he writes at the end of his stunning book, “because Lee resigned his commission, fought against his country, killed U.S. Army soldiers, and violated Article III, Section 3 of the U.S. Constitution. Lee committed treason.”

As a boy, Seidule read Meet Robert E. Lee, “my childhood bible.” And “growing up in Virginia I worshipped Lee, the Confederate general.” Seidule attended Washington and Lee University in Lexington City, Virginia, where Lee Chapel features a statue of the general lying on the altar, but nothing else: no hymnals, no Book of Common Prayer, and no Ten Commandments (as the first one is: “I Am the Lord Thy God and Thou Shalt Not Have False Gods Before Me”).

“My school worshipped Robert E. Lee, literally,” Seidule writes. “[He] was God, and his Confederate cause was the one true religion.” He admits, somewhat shamefully, that he, too, once believed “all the lies and tropes.”

Lee’s body lies in a white marble sarcophagus under Lee Chapel alongside the remains of his faithful steed, Traveller. Visitors place carrots and apples on the horse’s grave, along with pennies — “Always heads down. No one wanted to have the hated Lincoln’s face visible to Lee’s grave.”

While slavery was abolished in 1863, Seidule learned that slaveholders continue to be honored to this day. He reports that Confederate monuments at 34 cemeteries in the U.S. are kept up by the government at taxpayer expense. “Over the last ten years federal and state governments have paid more than $40 million to maintain memorials to Confederate treason and racism with only a pittance going to African American cemeteries from the slave era.” As an Army officer, he’s particularly irate about the monument at Arlington National Cemetery:

“That angers me the most because every year the President of the U.S. sends a wreath ensuring the Confederate monument there receives all the prestige of the U.S. government…among the 400,000 soldiers, sailors, airmen and marines buried on those hallowed grounds are my friends, colleagues and family.”

Most Confederate monuments, including those honoring Lee, were erected by the United Daughters of the Confederacy in the early 20th century to preserve the glorious myth of the Lost Cause — a Southern euphemism for inglorious defeat:

The United Daughters of the Confederacy sprayed perfume on the stench of slavery and fluttered swan's-down fans as they fashioned the Civil War as “the war of Northern aggression.” Seidule rightly calls it the war over slavery, and most responsible historians agree. But the author admits that while the South lost the war, they won the battle for the narrative.

No one did more to promote that narrative — moonbeams and magnolias, happy slaves and beloved masters — than Margaret Mitchell, who wrote Gone with the Wind, which has sold over 30 million copies to become the second most-popular book in America, next to the Bible. As the poet Melvin Tolson (1895-1966) wrote, “[That book] is such a subtle lie that it will be swallowed as the truth by millions of whites and blacks alike.”

The most damning indictment against Robert E. Lee is found in his own letters, which refer to the Emancipation Proclamation as “a savage and brutal policy,” words that aptly describe Lee’s treatment of his slaves, as verified in testimony given by one enslaved worker who had tried to escape from “Arlington” with his sisters. They were captured and punished:

“[Lee] ordered his constable to lay [the whip] on well with fifty lashes for [the man] and twenty for his sisters. After the whippings on their bare backs, Lee ordered salt water poured over their lacerated flesh.”

Ty Seidule writes with the passion of a convert who’s seen the light and needs to shine it for other to save them from “the lies and tropes” that blinded him for so many years. Robert E. Lee and Me is a cri de coeur, one man’s journey to humanity and his salvation from the pernicious lies of white supremacy.