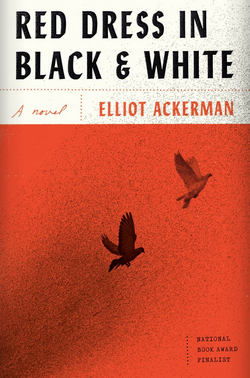 The plot of Elliot Ackerman’s latest novel hinges in part on the real-life nationwide outbreak of protests in Turkey that started in late May 2013. Protesters, initially angered over the planned commercial development of a bedraggled public space, Gezi Park, were met with police in riot gear armed with batons, tear gas, pepper spray, and water cannons.

A photograph of a woman in a red dress — standing alone and motionless as a masked police officer unleashes a torrent of pepper spray squarely into her face — became the galvanizing image of the movement spurred, in part, by the increasingly dictatorial impulses of the nation’s leader.

Red Dress in Black & White came out the week of the seventh anniversary of the Turkish protests, and the late-May/early-June timeline tracks closely with current events in the U.S. The unplanned, stark parallels to this specific moment in 2020 are many, down to the compulsive use of hand sanitizer.

Ackerman has long since established himself as the warrior-poet of modern American interventionism, first with Green on Blue, followed by Dark at the Crossing, Waiting for Eden, and the essay collection Places and Names. He is a master of painfully intimate portraits of despair, and his words have the authority, and often the weariness, of lived experience.

Red Dress has a different feel than those earlier novels, perhaps because it takes place outside the nominal field of battle. At first glance, it might seem almost simple, this story of a woman trying to leave her husband for her lover.

Catherine is an American, married to Murat, a Turkish national and head of a large and storied commercial real-estate development company. Together, they are the adoptive parents of 6-year-old William, for whom they have chosen American citizenship.

Catherine’s lover is Peter, another American expat, who is attempting to leave behind his career as a photojournalist and launch himself as an artist, but he’s had little success:

“To return to journalism meant to return to the ceaseless stream of body-bagged GIs, a fondue of suicide bombers, natural disasters, man-made disasters, all of it: senseless.”

Having a show of his work at the Istanbul Modern would establish him, but Deniz, the museum’s young and fast-rising curator, has his reasons for being unsupportive.

At the center of everything is Kristin, assigned to the U.S. embassy under the business-card designation of Cultural Affairs. In that role, she arranges for the grant that allows Peter a year’s freedom to pursue his artistic vision.

A single 24-hour period forms the heart of the story, during which Catherine — all impulse and no plan — takes William, plows past Murat, and shows up on Peter’s doorstep, whether or not he really wants her there. She is the perfect portrait of the over-privileged, self-absorbed American, thoroughly oblivious to the damage she leaves in her wake.

(As an aside, one of my favorite passages captures this idea, with echoes of T.S. Eliot’s Prufrock: “The women . . . keep saying wonderful over and over in their guttural voices as if that superlative is the last word of a spell that will transform them into the people they wish to be.”)

Catherine’s love for William is of a decidedly distracted sort; she is forever stroking his head or pulling him in her lap, but doesn’t notice when he’s about to vomit. Peter and even Murat, in his overbearing way, engage with William far more specifically as an individual, each attempting to impart his expertise to the boy.

If Catherine is oblivious America, Kristin is cold, calculating, self-interested America, the puppet master behind the scenes, controlling every character’s movements. Her chronic use of hand sanitizer is the perfect metaphor: “her reflex was to keep her hands clean.”

Murat is her asset for gaining unfiltered insight into Istanbul’s commercial and political arenas. In return, she connects him to the collateral that bankrolls his often-shaky business deals. His family name is known throughout Istanbul, but Murat is in over his head, literally and figuratively impotent:

“When it comes to his family, he loves the idea of them while, at times, he isn’t certain if he’s capable of actually loving them.”

Peter isn’t sure what he wants, either. His faith in his talent and vision is shaken during his time in Istanbul, particularly as a result of the protests. He photographs the woman in the red dress, but it is not the photograph. “In someone else’s hands the woman in the red dress had become an iconic subject. In his hands the subject had been relegated to nothing, to obscurity.”

In the end, it doesn’t matter whether Peter has talent or not; Kristin needs him to stay in Istanbul so Catherine will stay with Murat, and so Murat will continue to be her eyes and ears. No one else may have a plan for what they’re doing, but Kristin is playing enough three-dimensional chess for everyone. She is never impulsive. Well, almost never.

Ackerman weaves his tale together gradually, layering in the revealing details, tightening the screws to press against the fragility of each character’s tenuous circumstance.

One of those characters turns out to be the city itself. Ackerman has lived in Istanbul, and his intimate knowledge shines through, making that schizophrenic city — with one foot in Europe, the other in Asia — one of the most compelling portraits the author paints, a character that draws the reader in.

He describes the entrance to the imposing Dolmabahçe Palace as being “adorned with lashing Arabic script, the remnants of the country’s defunct Ottoman alphabet, which is now the unreadable language of a vanquished empire.”

It’s a worthwhile reminder that every empire, no matter how powerful, falls eventually.