“Oh, so you think it’s easier being Black than being gay?” 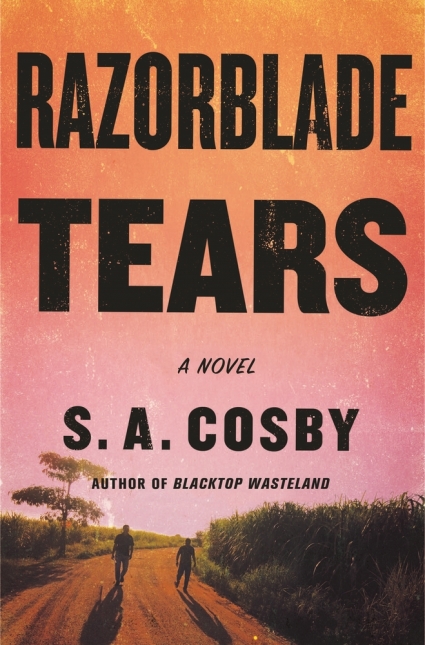 Fresh off the success of last year’s Blacktop Wasteland, S.A. Cosby delivers another powerful thriller with Razorblade Tears. Ike Randolph is a Black man with a past, but he left prison over a decade ago, reformed his life, and started a successful business. Still, he hasn’t come to grips with his son Isiah’s homosexuality.

Buddy Lee Jenkins, an ex-con who could be a poster boy for white trash, also has a gay son, Derek, who found love in the arms of Isiah. Together, the mixed-race, same-sex couple has a baby girl, Arianna. Yet their happily-ever-after comes to an abrupt end when the two are brutally murdered in an apparent hate crime a few months after Ike and Isiah have a heated confrontation about Isiah’s sexuality:

From that point on, the tale is simple enough: Ike and Buddy Lee have a score to settle. This revenge story of hunting down their sons’ killers is equal parts a bloody Tarantino film — think “Kill Bill” — and a saga of redemption by fire, both men needing to avenge their boys’ deaths to atone for failing them in life. “It didn’t seem fair for a man to mourn someone abundantly that he had loved so miserly,” Cosby writes.

Ike and Buddy Lee come from different places and dislike one another, but they find common ground — both have killed before — and common cause when the police shelve the unsolved case. Together, the grieving fathers take it upon themselves to hunt down the murderers. Justice will come at a price, though. As Ike says early on, he’s not afraid to spill blood again; he’s afraid he won’t be able to stop once he starts.

As a character, Ike is an oddity. Although he’s a person of color who has endured lifelong prejudice, he can’t seem to put himself in the shoes of a gay person who likely would also have endured bigotry. It’s the ultimate irony, and one the author exploits to great effect.

Buddy Lee, meanwhile, is struggling to become a better man. He’s dirt poor and living in a trailer for which he’s behind on the rent. Getting justice for his dead son becomes his life’s goal, one he knows he can’t achieve without Ike’s help.

This is the first book I’ve read by Cosby, and I enjoyed his knack for including small, seemingly throwaway lines that add flavor to each scene and bring the narrative to life. Although it touches on sensitive topics, Razorblade Tears is primarily crime fiction with a mystery at its core and a big reveal at the end. The action sequences come fast and close together and pulse with a visceral streak that will leave readers holding their breath until the final gunshot rings out. It’s no wonder the novel has already been optioned by Paramount Players.

I’d seen several advance reviews praising this book before I ever opened it myself. After reaching the end, I agree with the hype. Razorblade Tears may run only 300 or so pages, but it’s an epic.

José H. Bográn is an international author of novels, short stories, and scripts for television and film. His genre of choice is thrillers, but he likes to throw a twist of romance into the mix. He is a freelance writer, a translator, and a university professor of academic writing, public speaking, and English as a second language (ESL). Find him on Twitter, Facebook, and Instagram.