Suspend disbelief — and clear your schedule — before tucking into this imperfect yet immersive tale. 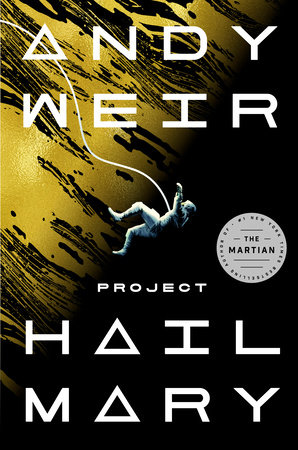 Project Hail Mary is not everyone’s cup of Tau. (That’s not a misprint; you’ll have to read the book — which I hope you do — to get the pun.) In fact, its author, Andy Weir, has many detractors who point out that his writing style leaves much to be desired, his humor is borderline juvenile, and he can be politically preachy.

All of this is somewhat true, but it’s beside the point. As he proved in his breakout novel, The Martian, Weir can spin a yarn and make a reader think.

In The Martian, the protagonist, astronaut Mark Watney, is accidentally stranded on the Red Planet and must use all his scientific knowledge to survive until Earth can mount a rescue mission and save him. For one thing, he has to grow potatoes in a place where nothing grows.

In Project Hail Mary, Ryland Grace awakens on a spaceship without knowing how he got there or if he is even an astronaut. Through a series of flashbacks, memory jolts, and brilliant reasoning, he figures out that there is more at stake than potatoes or his own life.

In fact, it is he who must save Earth.

Now, I took a lot of Weir’s science in The Martian on faith. I let him fudge a few things (such as Martian sandstorms) for the sake of the story. But I’m pretty sure most of what he wrote was factual. After all, for much of his life, Weir was a software engineer and an amateur rocket scientist. He gets off on relativistic physics, orbital mechanics, and the history of manned space flight. A nerd by another name.

I suspect that much of the technical stuff in Project Hail Mary is probably also right on the money. Weir claims that most of it is child’s play to any high-school science teacher. (That makes me wish I had paid more attention in class.) Figuring out how much centrifugal force one needs to mimic Earth’s gravity — by using a string — is not my forte. But it sure as heck makes for interesting reading. And it was one of Ryland Grace’s simpler challenges.

The flashback/memory dumps explain how Grace and Earth reached their respective impasses. They also flesh out the book with a virtual United Nations’ worth of characters of the cardboard-cutout variety. None of them really stands out, save for one woman Weir created, probably with Sigourney Weaver in mind.

Hollywood hit it out of the solar system with “The Martian.” It’s one of those movies that, when I come across it while channel-surfing, I drop everything to finish, even if there’s a grease fire in the kitchen. I don’t know if Project Hail Mary is similarly filmable, but as Ryland Grace proves, anything is possible.

There are surprises galore, including the fact that, even though the two crewmates Grace initially started out with are now mummified corpses, he is not alone. That’s about all I can reveal without giving away too much of the plot. But suffice it to say, Project Hail Mary is not your typical “let’s all go to the barn and save the Earth” sci-fi novel. It’s a story of courage and friendship and discovering oneself.

Still, the book is not perfect. Again, the writing is often clumsy. The novel is also too long, no matter how fast you read. (That’s a joke Einstein would appreciate.) And while Weir explains how Grace figures a lot of things out, he does depend on some shortcuts, mostly by using technology and elements that do not currently exist. Apparently, poetic license increases exponentially the further one gets from Earth.

I self-publish my novels, so it should surprise no one that Andy Weir is one of my heroes. He tried to interest “legacy” publishers in The Martian, only to be told to take a cosmic hike. So, he self-published it on Amazon, sold 25,000 copies, hooked Matt Damon on the story — and the powers that be suddenly decided he was brilliant.

If you like success stories like that, and books that leave you in awe of an author’s imagination, then Project Hail Mary is for you.

Lawrence De Maria is the author of more than 20 thrillers and mysteries, all available on Amazon in print and e-book form. He writes a regular column, “The Write Stuff,” for the Independent.