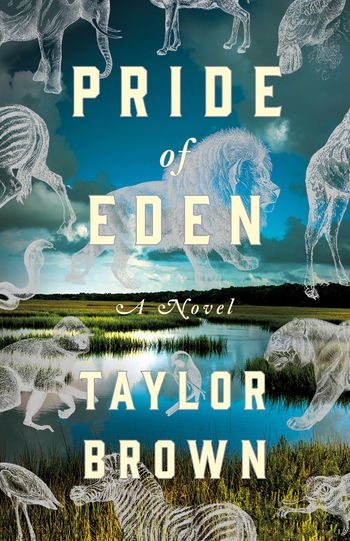 Taylor Brown is either remarkably prescient or very lucky to be publishing Pride of Eden in the same season as “Tiger King,” the hit Netflix series that debuted this spring. In the TV show, the New York Times noted that “humans and fearsome animals interact intimately, intensely and, sort of, lovingly, if that is possible given the general horror of keeping wild animals in captivity.”

It would be hard to find a better description of the animals and humans in Pride of Eden. The animals — apex predators, mostly — are fierce, wild, hard-muscled. The humans are tough, tattooed, sinewy, and, yes, hard-muscled, both the men and women. One character does 200 push-ups a day and rolls 50-pound dumbbells over his shins, making them “hard enough to shatter the thigh bones of lesser men.”

The book tells the story of ex-jockey and Vietnam vet Anse Caulfield; his lover, Tyler, a veterinarian; Malaya, a female combat veteran from Iraq; and falconer Lope, who joins Anse and Malaya as they move silently through dark nights and palmetto forests to kidnap or release mistreated animals.

The book’s action centers around Anse’s wildlife refuge near the Georgia coast. It’s called Little Eden, and its purpose is to rescue animals from conditions of abuse and neglect. Visitors enter the refuge between the giant jaws of a red-painted lion and pass dusty exhibits of mastodon teeth before getting to the animal pens and open areas.

The animals — tigers, lions, wolves, eagles, and, less emphatically, crocodiles — are what count to these characters. Anse and the others form a sometimes splintered coterie, bound by their shared passion for animals and their fierce detestation of the humans who misuse them.

Near the book’s opening, we are subjected to a horrible scene of African poachers cutting off the horns of a wounded but still conscious rhinoceros with a chainsaw. Not long afterward, Malaya, without compunction, aims her rifle at the lead poacher’s head and fires. We learn later that she missed, but we’re left thinking she would not regret for a moment putting a bullet through the man’s head.

Brown pushes his language toward the colorful and bloody, and sometimes that works well, as with this Vietnam flashback:

“The B-52 Arc Lights started rolling in...you ain’t known power till you watched an Arc Light strike come down in the night. Sixty thousand pounds of ordnance ripping across the valley floor at five hundred miles per hour. It was like the skull of the world being split open, bleeding fire.”

At other times, it gets strained: “[H]is heart felt fissured, shattered into a hundred bloody nomads, each fled fugitive from the cage of his chest.”

And, sometimes, simple language packs its own horrifying power: “Four days ago, a man at the rear of their patrol had stepped on a land mine, a North Vietnamese MD-82, which obliterated his legs. His upper half lay screaming in agony, damning God and Mother and Christ.”

There are a lot of dreams in this book, and a lot of flashbacks. One of the novel’s shortcomings is that the reader has a hard time telling one from the other. But the important themes emerge. In one especially moving Vietnam flashback, Anse’s devoted scout dog, Huey, who has shown extreme loyalty under fire, is killed, as Anse weeps uncontrollably despite the imminent danger from enemy fire.

Emotions, thoughts, and dreams are not limited to the human characters here. Mosi, a ferocious black-maned lion from the African veldt, plays a starring role. He is hunted in Africa as an especially magnificent trophy but stands with a thunderous roar, declaring himself so proudly, so regally, that the hunter relents and arranges for the lion to be brought back to Georgia, where it lives, variously, in a cage at a truck stop and in a forested preserve.

We don’t learn a whole lot about the human characters in Pride of Eden. Lope, who has trained a golden eagle named Aurora to perch on his arm and hunt drones, seems most sympathetic. Anse is taciturn inside his tough-coated veneer. He occasionally finishes sentences with a spit, or simply lets others’ questions go unanswered. Malaya is rough, tattooed with leopard images, capable of crumpling men who make cracks about her ass, rarely sexual.

Others take part in the lion or tiger hunts (which normally end with a tranquilizer dart), stalking along suburban streets or on a deserted island off the Georgia coast. They are participants in the action but otherwise unimportant. The character we know best is Mosi, whose wildness and power serve as a proxy for all the humans.

When he stalks a white-tail doe near a Georgia riverbank, we are in his head: “He will snap her neck between his jaws...then tear her limb from limb, burying his face in the hot gore of her belly. He will consume her, heart and bone.”

Mosi gets a sex scene, too (there aren’t many others). He confronts an enormous Amur tigress in his territory:

“Her eyes are gold. Her lips are pulled back, showing her teeth. She is tasting him on the air…Mosi lifts his great maned head, whose semblance has ridden on the shields and banners of nations. He inhales, swelling his chest, and blasts his roar through the night. Trees bend and shiver. Birds explode to flight. Eggs quiver in their nests, as if they might hatch, and the very stars seem to pulse. The wolves fall silent.”

The humans in this book cannot come close to that.

The Testaments: A Novel

The three-decade wait for this sequel was more than worth it.

The Island of Missing Trees: A Novel

Cyprus forms the backdrop for this tale of love and displacement.