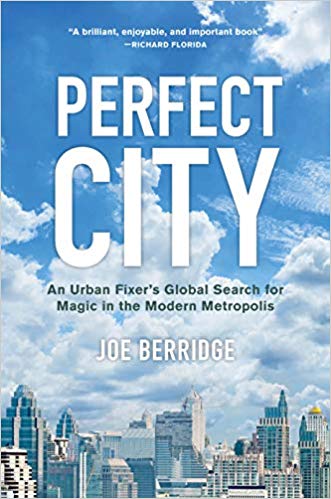 It wasn’t long ago that more people lived in the country than in a city. Those who prefer Times Square to fresh air and the stores to the chores didn’t become the majority until 2007. But the trend is clear and dramatic: Around 3 million people move to cities every week.

In Perfect City: An Urban Fixer’s Global Search for Magic in the Modern Metropolis, city-planning consultant Joe Berridge looks at how eight notable cities around the globe cope with the incoming tide and try to make the most of the resulting opportunities.

Berridge is based in Toronto, perhaps the first major city on Earth where most current residents were born somewhere else. He concedes that its success was largely unplanned, driven more than anything else by welcoming influxes of immigrants from all over the world — people who left their native lands motivated to succeed.

“Each time the world convulses,” he observes, “tens of thousands of newcomers appear in Toronto.” He delights in how his own neighborhood has been affected: “I still love Spadina [Avenue]…a fine-boned mess of a street that remains essentially the same every time it changes completely.”

Using Toronto as both a base and a standard of comparison, Berridge takes us on a tour including New York City, Singapore, London, Manchester, Belfast, Sydney, and Shanghai — joyfully ending each chapter with a restaurant visit because he believes good food is “the most reliable measure of urban health.”

It’s a reasonable sample of cities, to be sure, but fans of Paris, Rome, Tokyo, Berlin, Los Angeles, San Francisco, Dubai, and Istanbul, among others, may feel their favorites are unjustly overlooked.

Along the way, Berridge introduces us to urban planners with very different ideas.

“Think big!” said Robert Moses, known for ambitious projects in or near New York City, including two World’s Fair campuses, several major bridges, and Shea Stadium. Jane Jacobs, on the other hand, was a believer in keeping thing small — focusing on neighborhoods, even blocks. Berridge finds inspiration in both but more kinship with Jacobs.

His favorite way to assess the landscape on a consulting gig is to hoof it from the center to the outskirts, soaking up “mile after mile of immigrant shops: the starter food, restaurant, nail salon and travel businesses that are the entryways to entrepreneurship. Strips like these are the wetlands of the urban economic ecosystem. Ugly, unkempt and essential.”

He talks with as many people as he can — on the streets and in meetings with officialdom. Everyone — the residents, the local politicians, the tourists, and the business community — has ideas about how to make a city better, and few are shy about sharing their opinions.

“The trick to being a good city planner, as with a happy marriage, is to be a little bit deaf,” Berridge observes.

And, after all, what works here might not work there. Singapore, for instance, needn’t worry much about getting snow off its streets. But it also needn’t worry much about traffic at all, because it balances very tight restrictions on car ownership with a superb public transit system. Of course, Singapore’s not just a city, it’s a nation and an island — a relatively unique situation (although Berridge suggests that Malaysia, just across the causeway, could become Singapore’s New Jersey).

London also benefits from an excellent public transportation system (the Tube), and vehicular traffic there has been curbed a bit by the steep “congestion charge” for entering the business district during peak hours.

Another plus has been the clever repurposing of a port made obsolete by the introduction of container shipping. Developers turned it into the Docklands, a business/residential center with rail connections that helped open up East End sites used when London hosted the 2000 Olympics. But Brexit makes the British capital’s future uncertain, reducing attractiveness to immigrants and some global businesses.

If the United Kingdom leaving the European Union results in a reinstated border between Northern Ireland and the Republic of Ireland, Belfast might suffer, too. Over the past two decades, it’s made a considerable comeback from the days of “the Troubles,” an unofficial civil war which led to huge barriers separating neighborhoods. The murals on still-standing walls have become popular tourist attractions. What’s more, the city has capitalized on its own obsolete port with a Titanic museum on the very spot where the famous ship was built.

Meanwhile, New York City — where the Titanic was headed — has also mounted a major comeback in recent decades. One of the most recent reasons is Cornell Tech, a new college campus on Roosevelt Island in the East River, conceived to help bring more technology talent to the Big Apple.

Universities are important to the success of a city, Berridge notes, “because that’s where the brains are.” Good libraries are crucial, too, because they help immigrants learn English, get information about work opportunities, and make connections they’ll need to succeed.

It’s also a good idea, he adds, to encourage financial-services companies because they tend to underwrite attractive cultural events and help fill the tax coffers, making things like libraries possible.

Tax breaks for businesses? Berridge isn’t a fan — or, at least, he proudly defends Toronto for not dangling such a carrot in hopes of being picked for Amazon’s second headquarters location. “There is something profoundly immoral, a Faustian bargain, about trying to bribe one of the world’s largest companies, led by the richest man in the world, to locate in your city,” he says.

While those are the sorts of concrete observations one might expect from a thoughtful, articulate, and opinionated city planner type, perhaps the most intriguing parts of Perfect City are the fleeting moments where Berridge considers aspects much harder to control: the ways a city sounds, smells, and moves.

What’s his favorite city? It might be Sydney, which he describes as “Vancouver with a decent climate. Barcelona with an economy, Hong Kong with some gentle relief. San Francisco without fog and trust-fund brats.”

But what’s the city of the future, in the author’s eyes? It’s one that combines the most effective elements of thinking big and thinking small, successfully encouraging and accommodating a steady stream of newcomers. Hint: Berridge’s visit to a local eatery there features duck noodle soup.

Randy Cepuch is a book selector and reviewer for the Washington Independent Review of Books. His A Weekend with Warren Buffett and Other Shareholder Meeting Adventures (Perseus/Basic Books, 2007) was a global search for the perfect annual shareholder gathering.