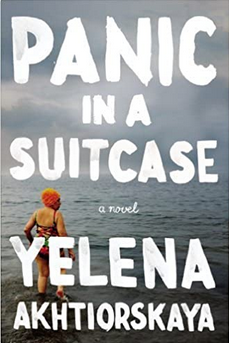 Yelena Akhtiorskaya’s debut novel has immense charm, is enormously funny, and shows readers worlds we had no idea we were so curious about. The book tells the story of a family from Odessa — a renowned, eccentric poet and his relatives — living in both Ukraine and a town that is a kind of expat Odessa-in-America: Brighton Beach, New York.

The story begins with Pasha the poet’s visit to Brighton Beach in the 1990s, and it concludes with his niece Frida’s visit to him in Odessa in 2008. Pasha is baffled and amazed when he visits the U.S., where his family pressures him, unsuccessfully, to emigrate and join them. Later, when Frida goes to Ukraine, she gets a turn at playing the amazed, sharply observant stranger in a new land. Her visit completes a cycle in this family’s history, although future generations will continue the story.

Panic in a Suitcase is not a strongly plot-driven book, though it is rich in narrative. The writing is dazzling, with sentences like fireworks rocketing off. But to enjoy the humor and warmth of this study of family and culture requires a rhythmic shift in readers’ usual approach to novel-reading.

It’s absolutely worth it.

The shift in question involves letting Akhtiorskaya’s tale emerge on its own terms, an adjustment that can take a while. This is not a book that lays out page after page of traditionally dramatized scenes. Rather, in place of most scenes, it presents what one might think of as a sketch or tableau: an assemblage of people that the author commences to observe and comment upon for the reader.

A flurry of marvelous, often very funny descriptions of people and places — sprinkled with dialogue and resulting in forward plot movement — propels us along. Often, even Akhtiorskaya’s use of the passive voice helps build these tableaux.

For example, when two characters visit a spa for some rejuvenation, events unfold passively: “When enough fuss was made”; “The situation was suddenly resolved”; “The key got stuck”; “Bathroom doors were left flung open”; “The clock was ticking.” You get the idea. But it works. The reader ends up savoring the stylish prose and gazing with unabashed admiration at the author’s masterful attention to detail.

Panic in a Suitcase is built out of innumerable remarkable lines, many of them turning an acute, critical eye on the women who populate this novel’s world: “Irena looked as if odd parts of her needed blotting at regular intervals, as if she had to sleep wrapped in a giant paper towel, or not so giant, as she was a tiny woman with no shoulders, just minute protuberances on either side of her neck that should have been pushed back in.”

Another character, Renata, is described as “a woman with eyes taking up half her face, further enhanced by dramatic, expertly drawn shadows.” The author completes this image by declaring that this face “was borrowed from one of the nocturnal animals kept in special enclosures at the zoo.”

The women in the book are wonderful, and there are lots of them, including the family matriarch, Esther, and her offspring. These Ukrainian women are astute, quirky, loud, and constantly in motion, and they offer a counterpoint to the often self-absorbed, somewhat oblivious men who surround them.

The book’s settings get the same sharp treatment. Akhtiorskaya’s exceptional eye for detail makes us trust her portraits of New York and Odessa. In Manhattan, Pasha goes walking on a cloudless, hot summer day, but is puzzled that he is moving “under an awry drizzle, getting sprayed in odd spurts.” This turns out to be “air-conditioner piss.”

A dizzying array of fleeting images assaults Pasha on his walk, from a manic bicycle courier’s bared teeth to the sight of men on corners who “demonstrated the hot dog as a two-bite affair.” These pictures force the reader to slow down and see what they are revealing, to savor their originality and precision.

When the story moves to Odessa, a place unknown to most American readers, Akhtiorskaya treats her audience to a real insider’s view, much of which is delivered in the form of instructions to Frida from her mother: “For the feral-dog situation, we recommend peppermint spray…Avoid the ritzy, snooty crowd on the Twelfth Fountain, but walk around there to see the houses…Eat only in the center of town, and nothing with mushrooms.”

Akhtiorskaya’s novel continually delivers playful surprises. The hilarious portrait of the poetry festival Pasha attends, for example, bears a tongue-in-cheek resemblance to certain literary conferences in lots of other places.

Russian-language poets from around the globe revel at this schmooze-fest, enjoying the luxury shuttle bus, grazing on the hotel lobby buffet at all hours. Admirers fawn all over Pasha, from the woman who tells him she’s had one of his books on her nightstand since 1995, to the young professor who boasts he’s been assigning another of the poet’s collections “in both his Mythology of Poetics and Poetics of Mythology courses for a decade.”

Panic in a Suitcase is a delightful comic novel from an original voice. As its vibrant characters accrue, in layers, over the pages, the book’s glimpses into family dynamics are amusing, but also deeply poignant — it’s a warm story, affectionate toward its characters, as well as a satirical romp. Readers of Akhtiorskaya’s debut work will be hungry to see what comes next from this promising Ukrainian-American author.

Sally Shivnan’s fiction and essays have appeared in the Georgia Review, Antioch Review, Glimmer Train, and other journals, and her travel writing has been featured in anthologies including Best American Travel Writing, as well as in The Washington Post, Miami Herald, Nature Conservancy Magazine, and many other publications and websites. She teaches creative writing at the University of Maryland Baltimore County (UMBC), where she is the English department’s director of Writing and Rhetoric.