One Night Gone: A Novel 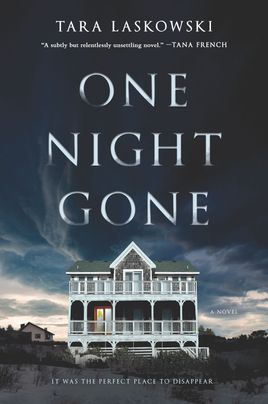 September 2015. Allison Simpson needs a hideout. After a nasty divorce and an ugly, viral tirade on TV news in Philadelphia, where she worked as a meteorologist, all she wants to do is lie low:

"I was supposed to be finding tile to remodel our kitchen, planning a trip to Greece, fighting with my mother about not having kids. Instead, I had regular appointments with a divorce attorney, sleeping pills, antidepressants, jaw pain, and a tiny bedroom my little sister let me crash in while I sorted out my life.”

Her sister, Annie, insists that house-sitting in Opal Beach — halfway between Ocean City and Atlantic City — will sooth Allison’s frayed nerves and allow her to emerge a new person. But Allison doesn’t want  to reinvent herself; she just wants her old self back, “the me I was before. Before it all crashed.”

Surely, as a stranger, Allison won’t have to deal with her past lurking around every corner. She can’t believe her good fortune in finding this quiet place in which to enjoy some solitude and regroup. To decide what she wants to do with her life and whether she should go back to being in the spotlight.

What Allison doesn’t know is that, decades earlier, in 1986, a girl named Maureen — a traveling carnival worker who lived in Opal Beach for the summer — disappeared. The rumor was that she’d left after breaking up with her boyfriend, the son of the richest family in town. However, not everyone believes the rumor is true.

Allison enjoys lounging at the house, listening to the surf pound the shore, and ignoring her to-do list. She hopes that having a little peace will help her heal the wounds from her brutal divorce and get on with her life.

That wish dissolves when she visits the local coffeeshop.

Tammy, its owner, was the best friend of the girl who disappeared all those years ago. Allison soon learns that Tammy doesn’t believe Maureen left; she thinks someone murdered her. Tammy begs Allison to help her put together the clues that will lead to Maureen’s killer.

Allison soon finds herself in the middle of a cold-case investigation. The idyllic beach town isn’t as perfect as it first appeared. The waves seem to whisper about dark secrets lurking in the dunes. Who are friends and who are foes? Women in Opal Beach have been prey for decades, but who are the predators? Allison doesn’t know, but she plans to find out.

And one thing is certain: Allison will never be the same.

Told in chapters alternating between 2015 and 1986, One Night Gone is a beach read wrapped in a murder mystery that readers can’t help but try to solve. With our toes in the sand and the misty, salt-tinged breeze blowing through our hair, we are compelled to join Allison in her hunt for Maureen’s killer and her search for her former self because Tara Laskowski’s debut novel is unputdownable.