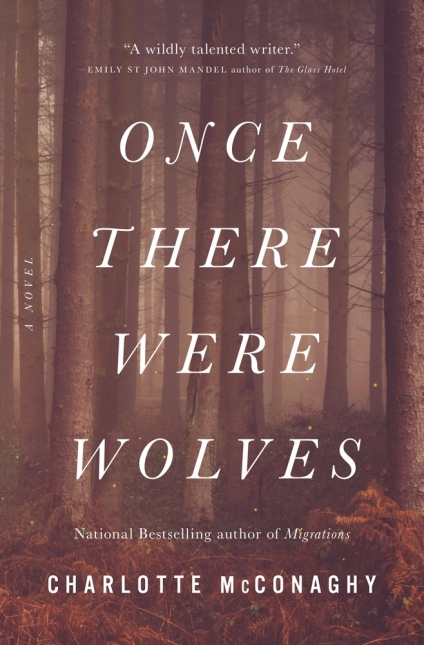 Charlotte McConaghy’s Once There Were Wolves pits biologists seeking to reintroduce the titular animals into the Scottish Highlands against a society that has intentionally moved on from the creatures. Like her previous novel, 2020’s bestselling Migrations, Once There Were Wolves explores the interplay between humanity and nature, and the author ably uses that battle as a mirror of our all-too-human conflicts between ourselves and those we love.

Local sheep farmers ignored the interdependent balance of nature. To protect their flocks, they supported the elimination of wolves from Scotland. In doing so, they inadvertently created an abundance of deer which, in turn, ate the vegetation and reduced tree cover, thereby hastening climate change. While sheep-tending provides a short-term economic benefit to the highlanders, it creates a long-term environmental crisis.

Protagonist Inti Flynn, a biologist, has come to Scotland from Alaska to release a pack of 14 gray wolves into the remote Highlands and hopefully right an ecological wrong. With her is her identical twin, Aggie, who was previously married to an abusive man who pimped her out to his friends. The mistreatment has left her nearly catatonic. As Inti describes:

“It’s one of her bad days, which means I can talk and talk and she will do nothing but gaze listlessly at something beyond my capacity to see. But I will keep talking, in case she can hear me from that faraway place.”

The local Scottish police chief, Duncan, who is soon drawn into Inti’s life, is hiding his own past as a victim of and witness to abuse. Given all the violence and suffering around her, it’s no wonder Inti prefers the uncomplicated company of wildlife and her work with the wolves.

Her mother, who prosecutes crimes against women and has seen the darkest sides of men, both encourages and disparages such empathy in her daughter. She warns Inti, “If you’re not careful — if you’re not vigilant — someone’s going to hurt you.” The novel focuses on this hurt.

As it happens, one of the most vocal critics (among many) of Inti’s wolf project is sheep farmer Stuart Burns, widely known to be beating his wife, Lainey. Yet in a community driven by a wish for isolation and privacy, no one intervenes to end the abuse.

When Inti discovers Stuart’s body with his throat ripped out and knows the wolves will be blamed, she hastily covers up the corpse to protect her charges. At this point, the story becomes a whodunit, with several characters plausibly guilty. Was it really the wolves, acting according to their nature, who killed Stuart? Or was it Lainey, hoping to put a stop to her suffering? Or could it have been Duncan, an old lover of the newly widowed woman?

The deliberate unfolding of mysteries is one of McConaghy’s strengths. The story of Aggie’s victimization is hinted at but only slowly revealed. Duncan’s past is uncovered bit by bit, adding depth to his character and clarifying his motivations. We learn gradually, too, about Inti and Aggie’s parents as the author doles out just enough detail to keep us intrigued. And, of course, Stuart’s murderer is exposed only after we’ve had a chance to consider the motives of multiple suspects.

The real highlight of Once There Were Wolves, though, is Inti’s sensual connection to nature. Her inability to witness sensations in others without experiencing them herself both connects her to and separates her from the world. She longs for contact with others but cannot enjoy it without concurrent pain. Contrast this with the rest of us, who willingly distance ourselves from the natural world, choosing to forgo the empathy that comes so easily to Inti.

Despite portraying the risky nature of human entanglement, the novel invites us to consider the role trust plays in our lives. Ultimately, our ability to survive in a dangerous world depends on our openness to accepting help from unlikely places and — as Inti finds out — unlikely people. “There is cruelty to survive, to fight against,” she reflects, “but there is gentleness more than anything, our roots deep and entangled.”

Once There Were Wolves is a thoughtful, enjoyable book, every bit as readable as Migrations. In it, Charlotte McConaghy has once again created a world where we must balance trust and fear, humanity and nature. That she can do so with such spellbinding skill makes me excited for where she might take us next.