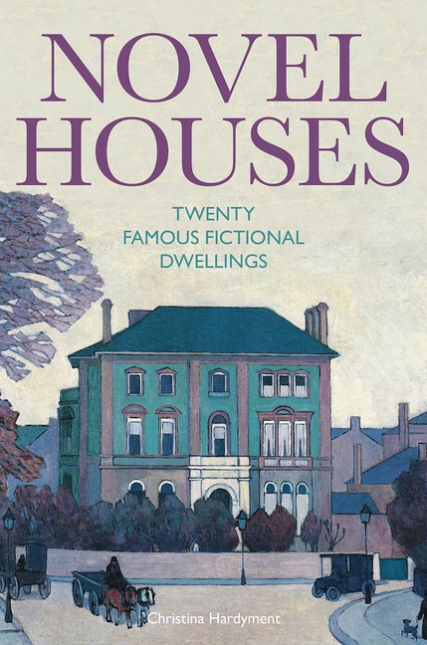 Home is where the heart is — but can a home be the heart of a novel? That’s the literary question Christina Hardyment answers with a resounding “yes” through the 20 loosely connected essays that make up her Novel Houses.

Each essay examines a famous book with a home at its center. Hardyment synopsizes the plot, detailing how the house (or castle or school) affects the action and characters — or, in some instances, is a character itself, sometimes the most vital one. Often, she can identify a real dwelling, usually one important in the author’s life, that served as a model.

The stories range chronologically from Horace Walpole’s The Castle of Otranto in the mid-18th century up to the Harry Potter series. Along with a focus on dwellings, a successive line of appreciation links many of the authors: Hardyment tells us Jane Austen (Mansfield Park) was admired by Walter Scott (Waverley), who, in turn, had a fan in Emily Bronte (Wuthering Heights).

In several instances, the central role of a dwelling in a novel is indisputable: from the title on down, the house dominates the narrative. Human characters are swallowed up, ejected, haunted, or beguiled by an apparently inanimate edifice that seems to have powers and desires of its own. Nathaniel Hawthorne’s The House of the Seven Gables and Mervyn Peake’s Gormenghast are prime examples.

Sometimes the anthropomorphizing is quite explicit: Windows become eyes (lit while alive; dark in death) and untended ivy on ancient walls is wild hair. In the climactic battle between good and evil in the Potter series, Hogwarts literally comes to life: “Its portrait people leave their frames…statues and suits of armor stride into action; even the classroom desks rise up and fight.”

But in other instances, Hardyment’s thesis seems strained. The home is in the title, for instance, but Harriet Beecher Stowe’s Uncle Tom’s Cabin addresses weightier issues than housing, and though 221B Baker Street contained the lodgings of Sherlock Holmes, the famous detective is not best defined by where he lives.

Ideally, the consumer of Novel Houses will have read all the books it discusses, and undoubtedly, there are many omnivorous fiction fans out there who have. A history and politics buff, I’m not one of them. My score: heard of author and/or novel (15); familiar with story (11); experienced narrative directly or through screen adaptation (9); read all or portion of book (4). Of course, even those who’ve made their way through every title may not have encountered several since high school or college.

Happily, both for members of the unread masses like me and those needing their memory jogged, the essays’ synopses not only inform but spur a desire to read (or reread) the whole book being considered. Like CliffsNotes, Hardyment’s essays can either satisfy or inspire, depending on your level of ambition.

The author limited her selections to English-language works, specifically those from Britain and the United States. It seems no accident that only three of the 20 are American stories: the aforementioned books by Hawthorne and Stowe, plus F. Scott Fitzgerald’s The Great Gatsby. (A fourth included American author, Henry James, set his The Spoils of Poynton in England.) Nor is it surprising that the collection’s author is a Brit.

It’s a cliché, but one with a tough kernel of truth to it, that the British are more attached to place than we, the notoriously restless Americans. Hardyment describes cars in several books serving as “harbingers of a new age, destructive of the old closed safe world of home.” I suspect a collection of essays about road stories would be overweighted toward books from the western shore of the Atlantic.

In her introduction, Hardyment declares herself “fascinated [by] well-established” houses, the kind that become “second skins, [defenses] against the world, nests.” Her brisk, deft writing displays that fascination, along with an obvious affection for old, eccentric houses and the people who live in and love them. Her capsule biographies of the books’ authors emphasize their relationships with domiciles — sometimes sad, sometimes lucky, often yearning — and are especially intriguing.

But Hardyment privileges not only U.K. houses, but also her U.K. audience, confounding at least this Yank by calling a billboard a “hoarding,” a wooden clothes dryer an “airer,” and an efficiency apartment a “bedsit,” among other scattered British-isms.

And grammatical sticklers from both sides of the Pond will be bugged by frequent, uncertain antecedents and dangling participles that lead kings to meet themselves, characters to change sex and take action after death, and Hawthorne to perform his duties as a customs officer in an attic bedroom.

Choosing a single element of a story through which to understand it is a well-established tool of analysis and one well executed here. Perhaps someone could perform a similar feat with the same 20 books through the prism of food or clothing. Because while houses are important features of these and other stories, it’s not actually the make-believe buildings that provide a home for fictional characters, but the authors’ ideas.