Night Wherever We Go: A Novel

Enslaved women reclaim their agency in this magnificent tale. 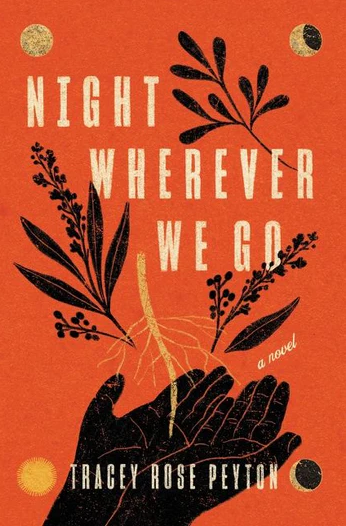 At the end of Dolores Kendrick’s poem “Hattie on the Block,” a woman bitterly grateful to be purchased with — instead of without — her young, feverish daughter, tells the girl, “Look lively, child. We be sold, but we ain’t bought.”

Tracey Rose Peyton’s moving debut novel, Night Wherever We Go, tells the story of enslaved women who likewise defy the heinous institution that purports to own their bodies. They live not on a wealthy plantation but in the hardscrabble frontier of Texas, where their enslavers own little more than two cabins, a stretch of unproductive cotton farm, and six women.

The women have nicknamed their kidnappers the Lucys, a deserved moniker that comes not from the couple’s last name (Harlow) but for being the spawn of Lucifer. The Lucys are always on the brink of penury, and Mr. Lucy is convinced that the way out of debt is through the enslaved women. As his uncle told him, “they can breed, increasing a master’s profit year over year every time a child is born.”

In the face of that corruption, the women resist. Though Mr. Lucy brings a traveling (enslaved) man to impregnate them, they push back, first in small ways. Junie, who was forced to leave two children behind in Georgia when she was taken by the Lucys to Texas, ceases bathing and ties a foul-smelling herb to herself. The guileless Lulu, who would “say the meanest thing possible directly to your face…then get up and make you a cup of tea,” tries to buy her way out of the man’s bed. Patience, whose husband may or may not still be alive somewhere, refuses the breeding man’s embrace, only to be beaten by Mr. Lucy.

It’s Nan, too old to be subject to the Lucys’ scheme, who finds the best possible means for foiling it. But when she proposes that the women chew on cotton roots to keep themselves baby-free, the others aren’t so sure. Patience argues that the best way to end the assaults is for someone to have a baby, while Junie vows never to have another child that can be wrenched from her arms and used against her.

The women know they need a unified response, and the novel reflects their small community by shifting in and out of a first-person-plural point of view. The six differ wildly from one another, but they rely on each other in turn. When speaking of their shared identity, they explain that “we borrow and steal [from each other] in good measure, sometimes throwing all our before-heres in a pot and making them available to the whole of we.”

While their communal voice emphasizes their unity, each woman gets her own voice, too, in a deft maneuver that Peyton executes perfectly. The story moves easily from woman to woman, including even Lizzie, the white woman who owns the enslaved and clamors for them to have babies so she can have a ready wet-nurse to replace her own uncooperative breasts — no matter that doing so would mean weaning any enslaved babies early.

The composition of the group waxes and wanes, as one woman leaves and another arrives, only to depart. “The road to becoming a we was not a honeyed one,” they tell us. Part of the genius of the novel is that we feel their individual and their mutual pain.

Time shifts, as well. The narrative begins with the illusion of fixedness — “In the coming year of our Lord, the 1852 Farmer’s Almanac predicted four eclipses, three of the moon, one of the sun.” But soon, the characters’ (and readers’) sense of time softens, like rocks turning to mud in the hand. The women track the seasons but lack a mechanism for counting the days, and so even the years lose meaning.

The progression of time is not, however, a miserable drudge. The enslaved community finds joy in one another, and some even let themselves find love. The youngest girl in our collective, Serah, begins a dangerous romance with an enslaved man nearby, and their liaison drives much of the plot in the second half of the book.

That plot is primarily the inevitable consequence of complex humans living in impossible circumstances, and this story is character-driven in the best way. The pages fly by. My only complaint, and it’s a slight one, is that the climax and denouement happen quickly, across a mere three-and-a-half pages. I suppose I wanted to ache more for our women but also rejoice at their victories.

This is a gorgeous, gripping novel that captures both the infinite tragedies of enslavement and the fierce courage of its victims. As our society grapples still with whether women can make decisions about their reproductive futures, the pain and pleasure depicted here feel even more relevant. Most essential, most relevant, however, is how these women resist. Sold, but not bought.

Carrie Callaghan is the author of the historical novels A Light of Her Own and Salt the Snow. She lives in Maryland with her family and four ridiculous cats.

The Fireballer: A Novel

A pitching phenom brings the heat to Charm City.