My Southern Journey: True Stories from the Heart of the South

The author wanders through his mental library to better define a disappearing Dixie. 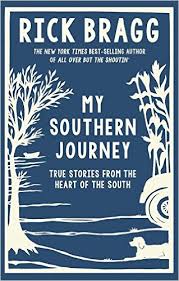 Everybody, Northerners and Southerners alike, has his or her own idea of what it means to be Southern. Some close in on hunting and claim it as Southern, but then my (practically Canadian) family in Upstate New York are fanatic deer and turkey hunters. And my South Carolina Gamecock cousin, a quintessentially Southern spirit, has never fired a rifle.

Even the geography is in dispute. My mother grew up in the South Carolina Low Country and raised me and my sisters in Georgia, South Carolina, and North Carolina. The South is in her bones. So when I moved to Northern Virginia (clearly below the Mason-Dixon Line) with my wife, my mom called our kin and said I’d left the South — and for a Yankee, at that!

Perhaps there never will be a definitive answer to what it means to be Southern, but it’s a real pleasure trying to get there with Rick Bragg’s My Southern Journey: True Stories from the Heart of the South. This essay collection embodies the fun in seeking the “true” South and, while topics like “piddlin’” and “shopping” are pinched into the mix, Bragg hones in on the key ingredients of family, place, and, yes, food, for his Southern pie. These 72 essays, each between two and four pages, carve out Bragg’s South and give us a bigger slice of this highly praised, Pulitzer Prize-winning author.

Though the South “will always be,” Bragg writes in the opening essay, “My Brother’s Garden,” “it will not always be as we remember.” His South is fading, “rusts, peels, goes away.” Each story, then, tries to collect and recollect that South, perhaps for memory’s sake, perhaps for the chuckle of a good yarn, or for Bragg’s own sake as he tries to hold what is slipping away.

In “The Porch,” he recalls his family’s home, whose walls “are another blank, the hallways filled with shadow” and which “has started to fade away in [my] mind.” Nostalgia is the glue of these essays on family, holding together his reminiscences: a crazy cat lady, moonshine medicine, all-night gospels, romping in red-clay mud puddles, and a child’s “forever summer [that]… just never ran out.”

In other pieces, Bragg focuses on place. In his humorous musing on the armadillo, he estimates he’s seen a million dead ones and “at most, three live ones.” “The Vanishing Redneck” offers another lighthearted take, identifying “fake rednecks” who look as if “a Bass Pro Shop had blown up and covered the men in designer camouflage.”

More wistful are his reflections on the Gulf, the small towns that come together after hurricanes, and the obligatory Christmas drives with family to see the holiday lights. Here the Southerner owns his community, has endless compassion for his neighbors (all politics and sports aside), and exhibits a unique seasonal spirit.

When Bragg writes about food, his true heritage surfaces. These pieces display his sincere and whimsical writing talent; they reveal the South as he feels it — in his gut. But here, too, his diet is one of nostalgia and loss. He bemoans the absence of pork fat and the “golden cracklins” his mother once made.

He laments the first taste of a grand oyster, which he can never experience again. He cries over the deli coleslaw which is so far from the source that it “will not taste anything approximating food.” And he weeps for the grouper sandwich, whose main ingredient is now a protected species and is, consequently, beyond the hook of his tongue.

The selections on sports are looser and less engaging. Southerners may be college-football fanatics, but in these pieces, Bragg, who champions content and commentary over the emotions of battle, betrays didacticism and predictability. For example, the piece on Bear Bryant does much to relate Bryant’s career achievements, but none of this gets us any closer to Bragg. In fact, it draws us away from him.

But these are only a handful of essays in a collection that is otherwise original, wistful, and funny — a portrait of an endearing character in a paradise of reminiscence.

Shelby Smoak’s book Bleeder: A Memoir (Michigan State University Press) received praise from sources as diverse as the Minneapolis Star Tribune, Library Journal, and Glamour, and has won several awards, including an IPPY and IndieFab gold medal and an American Library Association selection as “Best of the Best” from university presses. His poetry, fiction, and nonfiction essays have appeared in journals and magazines such as Northern Virginia Review, Cities and Roads, and Coastal Plains Poetry. Awarded a Pen/American grant for writers living with HIV, Smoak holds a Ph.D. in literature and an M.A. in English. He lives and writes in the Northern Virginia area.