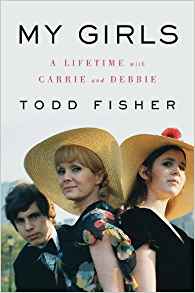 When a relationship comprises three interdependent people, it can be inherently flammable — and emotionally asymmetrical.

According to Todd Fisher’s new memoir, My Girls: A Lifetime with Carrie and Debbie, he and his beloved best friend/confidante/for-keeps sister interpreted life very differently. Carrie Fisher was prickly, penetrating, and pernicious, while Todd was inclined to be mellow, measured, and matter-of-fact.

Carrie and Todd were children of a well-publicized divorce that absorbed the world. Their father, singer Eddie Fisher, abandoned Reynolds for Elizabeth Taylor. Though Carrie was too young to recall the extensively played-out event, it is likely the loss was imprinted given future disappointments and no-shows from Fisher, who remained a wispy presence in her life until his end. Reynolds tried to counter, cushion, and compensate for the familial calamity with more than ample love:

“Mom really was incredible since Carrie and I were born, about doing everything in her power to make sure we were included in her life as much as possible. She never sequestered us or treated us like accessories to be trotted out for photo shoots and then handed back to a team of nannies like so many other ‘show-biz’ kids we knew.”

In 1960, Reynolds married Harry Karl, retired president of the Karl Shoe Stores chain. He lived in listless, laidback luxury and regularly played high-stakes poker and golf at Hillcrest Country Club with his influential friends and acquaintances, while his wife worked, endlessly. She guilelessly transferred the management of her financial affairs to her husband for safekeeping until she discovered — too late — that he had lost his $21 million and her $10 million to gambling, embezzlers, and bum-steer investments.

By then, Reynolds’ movie career was on the decline and, at 41, she was suddenly destitute. Her huge collections of art, silver, and jewelry were liquidated; the house was seized by the bank; and she and the children moved to a modest rental property.

Not long after that debacle, Reynolds was rescued — partially — by an opportunity to star in the Broadway revival of “Irene.” Carrie acted in the chorus, Todd was enrolled in school, and the show “broke every [box office] record,” morphed into a national tour, and garnered a Tony nomination for their mother.

Even with that success — and a $15,000-a-week salary — Reynolds’ finances were a fiasco. California’s community-property laws required that she pay half of Karl’s $2 million debt, five years of alimony, 50 percent of her “Irene” earnings, and 10 percent of her other income. Writes Todd:

“She did an amazing job in public of being the unsinkable Debbie Reynolds, just as she’d done through her divorce from Eddie. In private, though, she was drinking too much…she seemed to have two moods when she was drunk — either she was laughing and loud and almost obnoxiously happy, or she was maudlin and miserable, rambling endlessly about Harry and Eddie.”

After the tour, Reynolds returned to Las Vegas for lucrative engagements at the Desert Inn and the London Palladium. Carrie continued to perform, despite panic attacks, which she quelled with weed, Percodan, and angel dust. It was a secret dependence-on-the-rise known by Todd — who sometimes participated. Ironically, he had no indication or foreshadowing then about his sister’s troubled trajectory into addiction.

Todd, in the meantime, had achieved acclaim as a trained and traveled photographer, fine filmmaker, and competent sound engineer. He was managing and supervising the technical aspects of various musical acts and his mother’s productions.

When the London run finished, Carrie stayed there a year to study at the Central School of Speech and Drama, abruptly suspended contact with her mother — without remorse — and auditioned for an unassuming film called “Star Wars” that she hoped wouldn’t capsize her career:

“Star Wars [at the 1977 premiere] had already been rolling for a minute or two. Along about the time that the battle cruiser flew overhead, I leaned over and whispered to Carrie, ‘This is no B movie.’…And when it was over, we were both speechless, wide-eyed, and to understate it, blown away…Carrie clearly wasn’t just in that movie, she stood shoulder to shoulder with it, which was a triumph in itself.”

Eventually, Carrie was diagnosed with bipolar disorder, but she had a particular affinity for quack doctors who were open-minded about supplying her with large stashes of feel-good drugs. She was partial to Percodan to diffuse her mania, but that agenda clashed with the proficient professionals who genuinely wanted to quiet her cerebral chaos with mood stabilizers, rehabilitation, and shock treatments.

Despite those inner volcanic "voices," Carrie emerged into a much-in-demand, uncredited script doctor — of “Lethal Weapon 3,” the “Star Wars” prequels, and other hits — plus the admired author of Postcards from the Edge, Wishful Drinking, and Shockaholic.

In 2008, Carrie reunited with her weak, widowed father, and co-opted his care:

“It was nothing short of mesmerizing to see the deep joy it gave her to be with him…He’d sit in his wheelchair all day, or lie in his bed, watching CNN…smoking one joint after another, prompting her to give him the fond new nickname ‘Puff Daddy.’ As she marveled more than once, she finally got what she’d always wanted from him …in the end, she was a great parent to Eddie Fisher.”

In her last years, Debbie Reynolds fretted and feared for her daughter’s future wellbeing. Then, on the morning after Carrie’s death in December 2016, the 84-year-old actress informed Todd, “I want to be with Carrie” and — within hours — followed her child into eternity.

Paradise in Chains: The Bounty Mutiny and the Founding of Australia