This ambitious work uses a dual storyline to contemplate how far people are willing to go for their beliefs. 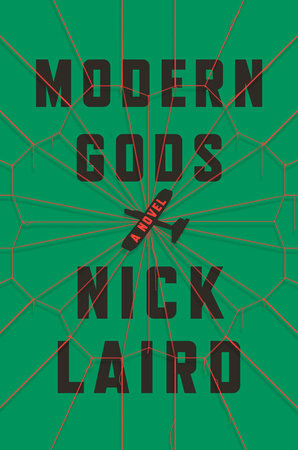 Modern Gods, the latest story from poet and novelist Nick Laird, is an exploration of belief systems — religious, ethnic, marital, or otherwise — and tensions that rise when two are set against one another.

Structured like a tuning fork, the novel starts out as a single narrative that eventually divides in two. The characters are separated and sent down seemingly unrelated paths, paths that encourage the reader to find patterns, or even harmony, in the tense vibrations.

Liz Donnelly has been working as a professor in New York City, but is now returning to her home in Northern Ireland to attend her sister, Alison’s, wedding. Liz is met at the airport by Alison’s fiancé, Stephen, whom she is meeting for the first time. Their hours-long drive through Ulster, from the airport to her parents’ home in Ballyglass, acts as Liz’s and the reader’s opportunity to get to know Stephen. It also serves as the reader’s tour of the province.

The weather: “The light of Ulster traveled not by particle or wave but by indirection, hint, and rumor.” The architecture: “They were stopped by traffic lights at the courthouse, the huge stockade of barbed wire and guard posts and searchlights.” The political history: “A new sign…nailed to a telephone pole: In Texas murder gets you the electric chair. In Magherafelt you get the chair of the council.”

But Liz’s stay is short. The day after the wedding, she begins 52 hours’ worth of travel to a small island off the coast of Papua New Guinea, where she’ll work as a presenter for a BBC documentary about new religions and what gives rise to them. At the very same time, Alison is waking up to nauseating news about Stephen’s dark, violent past, waking up as a newlywed and understanding she does not know the man she married.

And here is where the narrative divides. Liz arrives on the island, along with a television crew, and meets a native woman named Belef, the leader — the god — of a budding religion called the Story. Simultaneously, Alison works to navigate the life she’s entered, trying to decide if she and her children can move past the horrors in Stephen’s past.

The storylines, set in juxtaposition, give the reader an opportunity to explore themes that otherwise might be unapparent. This is especially important since Alison’s track, and her dominant perspective in it, feels partially removed from what her half of the novel wants to be about: the history of the Troubles in Northern Ireland and the scars it left on the country.

For example, Liz, witness to tensions that arise between Belef and a group of Christian missionaries, gives one a different lens through which to view the violent, decades-long guerilla conflict between the Catholics and the Protestants in the late-20th century. Belef’s handling of her daughter’s death, and her treatment of those she holds accountable, causes one to consider how Stephen is held accountable for his past. In the space between Liz and Alison, operating on opposite ends of the globe, Laird gives great license to ruminate.

The balance isn’t always perfect. Liz’s relationship with Belef and her role in reporting on the Story dominate the second half of the book. Alison’s story, while artfully and necessarily woven in, feels secondary at times and, in fact, as the novel nears a finish, disappears for longer and longer periods.

Furthermore, while Laird has no difficulty tracing with words Alison’s emotional volatility while she comes to grips with the fact that she married a man who may or may not be a monster, he also asks the reader to swallow a large, pointy pill when describing how she entered the marriage to begin with. She knew Stephen had a bloody past but never wanted the details.

Stephen tried to explain on their first date, “I’ve done things no one should ever do.” And emphasizes for her, “The worst things you can do.” But Alison cuts him off. And later, as they’re about to be wed, she says, “I don’t even want to know.” It makes one struggle to sympathize with her and her predicament.

However, these things, and the abrupt and oddly reflective end — as if the aforementioned tuning fork were suddenly gripped — don’t diminish the effect of the ambitious work. Exploring the beliefs, practices, and relationships of these characters feels important, and Laird holds little back.

In addition to their stories being contrasted within the bounds of the novel, each should probably be contrasted with one’s own, especially the religious and the notions of dark pasts. Laird’s work as an award-winning poet is evident in his prose, which is beautiful and fluid and also gut-wrenching in all the right places.

Lee L. Krecklow is the author of the novel The Expanse Between (Winter Goose Publishing, 2017). He was the winner of the 2016 Million Writers Award and has work appearing in Eclectica, Gravel, and Oxford Magazine. Find more at www.leelkrecklow.com.