This transportive tale immerses readers in the arts scene of 17th-century Holland. 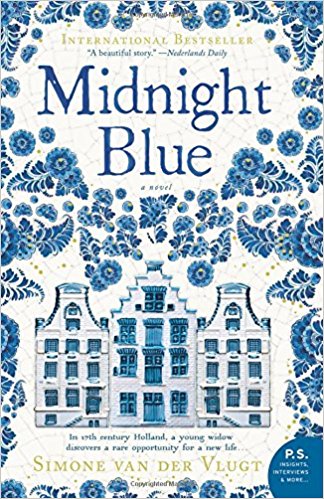 It’s Amsterdam, 1654. A young housekeeper, Catrin, accompanies her employers to a meeting with none other than Rembrandt van Rijn. As the group discusses business, Catrin loses herself in van Rijn’s in-progress portrait.

“Do you like it?” the master painter asks her.

“It is the most beautiful thing I’ve seen,” Catrin concludes.

Catrin’s earnest praise earns her the smile of the already-famous man, even while he’s dismissive of her apparently less-perceptive employers. And this brush with greatness serves as a sort of magical tipping point for Catrin’s own artistic ambitions.

Not that Midnight Blue is setting Catrin up to become an unsung heroine of 17th-century art. Catrin, or perhaps author Simone van der Vlugt, is too enterprising for that. Instead, she is the charming, practical heroine of her own story, one who, along the way, gives history a few good nudges of her own.

The novel opens just after the funeral of Catrin’s ill-matched husband, and she can feel only relief. With her newfound freedom, she quickly abandons her village homestead for a job in the city. A lucky encounter with a handsome trader, Matthias van Nuulandt, sets Catrin up with a job as housekeeper in the home of Matthias’ brother Adriaan. It’s not long before she’s enmeshed in the lives of all three van Nuulandt brothers.

In Adriaan’s household, Catrin starts to listen to the siren call of her long-suppressed creative tendencies, and after that encounter with Rembrandt, she takes her talent more seriously. Perhaps too seriously, in fact, when a bold foray into painting ends up, by a strange turn of events, forcing her to leave Adriaan’s employment.

Fortunately, the van Nuulandt family arranges for her to relocate to Delft in the employ of the third brother, Evert. Evert owns a pottery-painting workshop, and he takes a risk (and saves some money) by hiring Catrin as a female painter. There, she comes fully into her own as an artist and businesswoman, but as she does so, the ghosts of her past and the passions of her present intersect in menacing ways.

Midnight Blue is a pleasure to read, with charming characters and a well-oiled plot that skillfully jumps from one obstacle to the next. Catrin’s problems seem irresolvable, in the best way, until she manages to tease out the knots she’s tied around herself.

Translator Jenny Watson skillfully renders van der Vlugt’s prose in an English that retains the slight flavor of its original Dutch, creating a first-person narrative with the delicious sense that Catrin is telling her story in her own Dutch-inflected voice.

This narrative unfolds in a landscape fittingly populated with canals, narrow streets, and Holland’s characteristic polder fields. Still, the historical background is rendered with a light touch — almost too light for this fan of historical fiction — and Catrin’s drama is delightfully universal.

The novel flirts with some tantalizing themes, particularly the relationship between talent and hard work. One dilettante painter in the book has a dedicated, almost fanatical work ethic, but she lacks Catrin’s raw talent. At the same time, Catrin herself argues, “We should be satisfied with the talent we’ve been given and take pleasure in it.”

There is wisdom there: the satisfaction in measuring our accomplishments by our own marks, as compared to fretting over some universal standard. As Catrin says, “It’s not about the result, it’s about the enjoyment of doing it.”

The book itself, however, seems to argue against Catrin. The young woman’s intuitive talent opens doors for her that remain locked to those with mere willpower. Then, about halfway through, the theme seems to disappear entirely, as more existential and dramatic events claim her attention.

But no matter. The pleasure of those compelling plot developments will whisk the reader away along with Catrin, making Midnight Blue an utterly enjoyable and transportive read.

Carrie Callaghan is a writer living in Silver Spring, MD. Her debut novel, A Light of Her Own, is forthcoming from Amberjack Publishing this November. Her short fiction has appeared in Silk Road, Amsterdam Quarterly, and elsewhere.