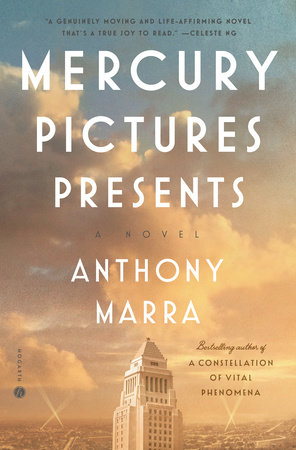 In my 2015 review of The Tsar of Love and Techno, I pondered, “What is it about the spare beauty of Anthony Marra’s prose that makes us want to laugh and cry at the same time?” I had been entirely transported by his stunning debut, A Constellation of Vital Phenomena, and still feel it’s the closest thing I’ve read to a “perfect” novel, one showcasing Marra’s thoroughgoing command of plot, character, and voice.

It is that voice that sets him apart and above: a quiet, compassionate, observational wit that he uses both to highlight essentially tragic circumstances and to soothe them. While that voice remains and speaks throughout his latest novel, Mercury Pictures Presents, there’s an antic quality here that we’re not used to from Marra. It’s almost as though he received editorial notes equivalent to a woman being told to smile more.

Just to ease the dramatic tension, though, I’ll state up front that, in the end, Marra melted my heart, and I view Mercury as a worthy addition to the author’s canon.

As with Marra’s previous books, this one is built on hundreds of threads that weave through time and geography, often amid small moments and seemingly incidental events. Any character, however glancingly introduced, will show up again. Any item — a scale model, Frankenstein’s monster, a cat, the rowboat that connects four characters and becomes a leaky path to freedom — is necessary. We watch the warp and weft of the story build, sometimes wondering where the narrative is taking us. It isn’t until we step back at the end that we finally see a fully rendered tapestry.

Maria Lagana, 28, is the underpaid, overworked associate producer at second-rate Hollywood studio Mercury Pictures in the early 1940s, the gal Friday to head of production Artie Feldman. She is also the daughter of Giuseppe Lagana, formerly Rome’s most successful defense attorney until he ran afoul of Mussolini’s fascist government and was sentenced to confino, deportment to the hinterlands of San Lorenzo, in the toe of Italy’s boot. With no way to support the family, 9-year-old Maria’s mother, Annunziata, takes the girl to Los Angeles to live with her three ancient, widowed aunts.

The book is interwoven with these two geographies, San Lorenzo and L.A., in the years ushering in WWII. Giuseppe works to build a life for himself within the two-kilometer-square borders of his exile in Italy, recreating a tiny family to stopper the hole in his heart where his own dearest ones have leaked away. Signora Picone, the town’s passport photographer, takes him in so he can teach some smarts to her son, Nino, who is “the sort of earnest, excitable child whom other children stuffed in barrels and rolled down hills.” Nino and Maria meet briefly as she and Annunziata stop in to say goodbye on their way to a new life.

When Nino’s mother dies, Giuseppe pays Concetta Cortese, another San Lorenzo widow, to raise Nino the rest of the way. Her son Vincent, “a hormonal freak of nature who probably began shaving at nine and fathering illegitimate children at ten,” improbably becomes Nino’s protector once he realizes the boy pays rent. This is Giuseppe’s foster family.

Meanwhile, an ocean away, Maria’s seamless assimilation into American culture provokes her disdain for her thoroughly Italian mother. It doesn’t help that no one is willing to acknowledge the truth: It is Maria’s fault that her father is imprisoned. Her parents won’t admit they know what happened, and the girl’s guilt keeps her mute. The silence between mother and daughter seems an unbridgeable gulf.

Hence, her life becomes her work at Mercury, a place run by Artie and his identical twin, Ned, two men who’ve never been mistaken for one another and hate each other’s guts:

“In a business where friendship had a high turnover rate, the Feldman brothers’ animosity was a stabilizing force. Artie would give Ned an organ, but wouldn’t lend him a five-spot, handkerchief, or kind word.”

Artie may appear cynical and sleazy, but he maintains carefully hidden morals that keep him up at night. His studio becomes a haven for those driven from their homelands. (“You could map the march of fascism across Europe based on Mercury’s employment rolls.”) One of those, eventually, is Nino Picone, now known as Vincent Cortese.

Mercury’s films run afoul of isolationist America, and Artie is hauled in front of the Senate Investigation into Motion Picture War Propaganda. The premiere of Maria’s film, “Devil’s Bargain,” which retells Faust through the lens of Nazi collaboration, causes a riot; fortunately for Mercury, the Japanese bomb Pearl Harbor the next day, and Artie is hailed as a visionary.

He soon has cause to question that vision as internment camps spring up across U.S. deserts, and as the Marias of America must begin registering as “enemy aliens” and be sentenced to their own confino, a five-mile radius encircling their homes.

Mercury is a story of fascism abroad and at home; of Faustian bargains accepted or rejected but always regretted; of the hierarchy of racism, and of marginalized people forced to hide their true selves — though where better than in Hollywood? — who seek only the warmth of home; and of the basic difficulty of allowing ourselves to connect with those we care for most.

Neatly illustrating all of these themes is Maria’s beloved: the third-generation American actor Eddie Lu, who can recite Shakespeare and Chekhov but is only ever allowed to play nefarious Asians with caricature accents, and who always wears his “I’m Chinese American” button in public to keep from getting beaten up. He is prevented by California law from marrying the woman he loves.

So, what of that antic voice that seems so non-Marra? Particularly early on, the narration is rife with extended, sardonic descriptions, no more so that when we’re spending time with Maria’s great aunts, who serve as a kind of comic chorus. Characters banter in sharpened one-liners, which is perhaps fitting in the Hollywood studio, but it’s there among the Old-World Italians, too. At times, it feels like we’ve stumbled into an Aaron Sorkin script.

And yet — and yet — the ineffable magic of Marra’s prose, its ability to break his reader’s heart with the lightest touch, is everywhere. Each cameo character is completely human, from Betty Ludlow, with her 10 concurrent wartime husbands, to Louis Harrington, a Black enlistee convicted of murder when all he did was order breakfast.

We never even learn Nino’s mother’s name, but we know she was an artist and a romantic:

“Nino’s mother taught him how to light a photograph according to its purpose, its audience, and its subject. ‘We will make him fall in love,’ she assured an anxious young seamstress who came to have her portrait taken for a prospective suitor. The suitor, a stonemason in Ohio whom the seamstress would be buried next to seventy-three years later, saw the love of his life for the first time through the eyes of Nino’s mother.”

Mercury Pictures Presents showcases imperfect people in an imperfect world groping to connect, all from an author who continues to pen perfection.