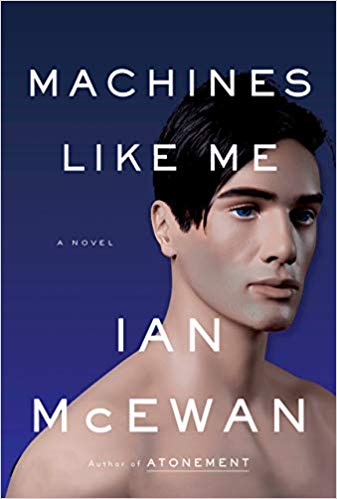 Booker Prize winner Ian McEwan’s captivating, speculative new novel, Machines Like Me, is a little complicated. It’s also a rather simple, familiar plot with a cunning twist on the romantic triangle.

Machines Like Me is a postmodern novel set in a 1982 alternate London. Alan Turing, the brilliant real-life mathematician who “got into trouble with the law for having a homosexual relationship” and died in 1954, is here alive and well and, since 1969, living openly with his lover, Tom Reah, a Nobel Prize-winning theoretical physicist.

Britain loses the Falklands War, along with thousands of lives. Prime Minister Tony Benn vies for power with Margaret Thatcher until he is killed in the bombing of the Grand Hotel in Brighton. (Googling some of the facts indicates what McEwan has done to rearrange his world. He even reaches out to the U.S., where JFK escapes a “near-death in Dallas.”)

This isn’t the first time McEwan has walked on the wild side of science fiction. The chilling The Child in Time occurs in a near future, after a fight between Soviet and American Olympic athletes almost escalates into nuclear war. The mind-boggling, WWII-era Atonement apparently was born as a sci-fi story set hundreds of years in the future. And the recent, startlingly original Nutshell reimagines Hamlet from the point of view of a fetus.

Back to Machines Like Me, where Adam, the android, was not Charlie’s first choice. He wanted an Eve. There are 12 Adams and 13 Eves around the world, all advanced models of an artificial human. McEwan makes it clear that Adam is “not a sex toy.” He is, however, “capable of sex and possessed functional mucous membranes.”

He is “uncircumcised, fairly well endowed, with copious dark pubic hair.” These bodily details and functions are what upend the messy alliance after Charlie realizes he’s been “cuckolded by an artefact.”

From the beginning, Charlie and Miranda (there’s a nod to The Tempest here) embrace Adam as their own. Each contributes half of his personality based on programmable parameters. Charlie decides that neither he nor Miranda would know what attributes the other has chosen.

These could include the psychological Five Factor model — “Agreeableness. Extraversion. Openness to experience. Conscientiousness. Emotional stability.” They could also include variations on a theme — Adam could be “delightful,” or Miranda’s “man of her dreams.” There would be a chromosomal connection; they would be a family.

Then Charlie is blindsided when Adam suddenly warns him that he should be careful of trusting Miranda. Adam claims there is the “possibility she’s a liar. A systematic, malicious liar.” Like an emotional game of Jenga, when this block is pulled, the already tenuous alliance begins to topple.

The alleged lie refers to an incident in Miranda’s childhood. There is a “rape, a suicide, a wrongly kept secret.” Flashbacks and an eventual confession ultimately reveal the truth behind Adam’s bombshell accusation, but not before the android’s plug is almost pulled.

There is an uncomfortable melancholy to Adam’s warning at the conclusion of Machines Like Me. He cautions that there is a “sadness that’s to come” between humans and products of artificial intelligence. It “will happen. With improvements over time…we’ll surpass you…and outlast you…even as we love you.”

Though McEwan’s variant world is 1982, the implication is that the future is now.