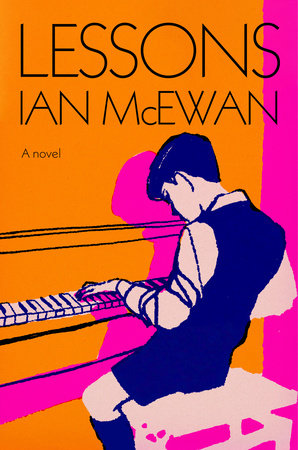 I once remarked to a colleague that I shouldn’t weigh in on a certain matter because I was in the tank for the person raising it. “I hate that term,” he replied, adding something about it sounding tawdry. But I disagreed. To me, “in the tank” is merely shorthand for having a baseline affection or respect for someone that’s so high, it’s impossible to be a dispassionate critic of anything they say or do. Or write.

Full disclosure: I’m in the tank for Ian McEwan.

Since reading his powerhouse WWII novel, Atonement, 20 years ago, I’ve devoured and evangelized most of his oeuvre. But with great fangirling comes great responsibility, so I was prepared to pull no punches when assessing the latest entry into the McEwan canon, Lessons.

Mercifully, I didn’t need to. In telling the story of Roland Baines, the author gives his readers what they’ve come to expect: insight, intelligence, beautiful language, close observation, and a subtle undercurrent of wit.

Roland is an everyman whose life (like those of all baby boomers lucky enough to survive into the 21st century) unfolds amid extraordinary international events. Born three years after the conclusion of the Second World War, he walks the planet as the Iron Curtain goes up and the Berlin Wall comes down, sees AIDS recede and covid-19 emerge, and watches his country alternately thrive and languish at the hands of Labour and the Tories. It’s against this backdrop of momentous happenings — “Only the backward look, the well-researched history could tell peaks and troughs from portals” — that Roland’s own triumphs and tragedies play out.

It’s 1959 when his mostly happy childhood on a British military base in Libya comes to an end; his parents are sending him back to England to attend boarding school. He’ll learn piano while he’s there. “The lessons were arranged with the housemaster, who wrote back pleasantly to say that all was in order and Miss Cornell, who had recently graduated from the Royal College of Music, would be Roland’s tutor.”

Miriam Cornell — via a glancing, intentional grope that leaves 11-year-old Roland confused and readers repulsed — quickly becomes the dominant figure in his life, supplanting his dysfunctional family, his teachers, and his schoolfriends. Although it’s a few years before whatever it is they have morphs into a full-on affair (fueled, in part, by the Cuban Missile Crisis and its promise of widespread annihilation), Roland is still a minor, Miriam is still an adult, and the reader is still horrified. The psychological and sexual fallout will haunt the boy all his life.

Except that it doesn’t. Not really.

Were this a typical contemporary novel, the Very Bad Thing would define its protagonist, muting all that came before and dictating all that follows. The plot would hinge on our hero recognizing the Very Bad Thing as the organizing fact of his life and then overcoming it. By that triumph, we would know him. But McEwan isn’t having it. Instead, he seems to suggest, it’s the accumulated moments both pivotal and pedestrian that make the man. No single incident is ever the whole story.

For Roland, this means no single person defines who he is, although the one who arguably comes closest isn’t his former piano teacher (though she looms large). As the predatory Miss Cornell recedes into the background — another gift of time: Long-ago earthquakes soften into tremors — the woman who emerges to leave the biggest imprint on his life is the one he briefly marries.

“How did Berlin and the renowned Alissa Eberhardt come into his life?” Roland wonders early on about the woman who weds and soon abandons him to raise their infant son, Lawrence, alone while she pursues — and, to Roland’s bemusement, achieves — fame as a writer. “In settled expansive mood Roland occasionally reflected on the events and accidents, personal and global, minuscule and momentous that had formed and determined his existence.”

These reflections are not occasional; Lessons is rife with them. Written during the pandemic by a now 74-year-old author, the novel (despite its many characters with interesting backstories) doesn’t even have a plot. Rather, it has Roland, a failed-poet-turned-hotel-pianist with grand aspirations, a complicated past, and what turn out to be simple needs: kids around the table, decent wine, a cat in the garden, knees sturdy enough to go three sets, and a little more time with the people he loves. The planet may be burning, but his own hearth comforts him nonetheless:

“It often happened like this, Roland thought, the world was wobbling badly on its axis, ruled in too many places by shameless ignorant men, while freedom of expression was in retreat and digital public spaces resounded with the shouts of delirious masses…Simultaneously, in the old-fashioned glow of close family, made more radiant by recent deprivation, he experienced happiness that could not be dispelled, even by rehearsing every looming disaster in the world. It made no sense.”

McEwan is right. It doesn’t make sense, but you can’t deny it. There’s a lesson in that.

Holly Smith is editor-in-chief of the Independent. She’s in the tank for John le Carré, too.