Despite a muddled beginning, this propulsive debut rewards persistent readers. 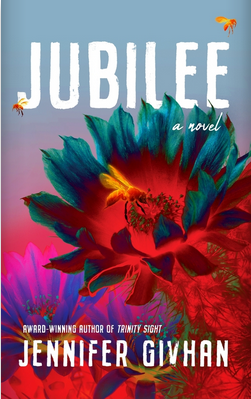 Jennifer Givhan’s debut novel, Jubilee, opens with a prologue: the fever dream of a young woman, Bianca, driving through an arid California valley. Her prayers, exhaustion, and sobs are broken up by long descriptions of the land she’s passing through. As country yields to city, Bianca mourns the loss of her best friend, worries about her baby, Jubilee, in the back seat, and touches on a suicide attempt. Scattered thoughts about Matty, Gabe, Bisabuela, Mama, Sandra Cisneros, and a man selling an orange rise and fade as she continues along.

Finally, she arrives at her brother Matty’s house and hands over her baby to safety. When Matty exclaims that Jubilee is a doll, Bianca collapses into a dream of water and tiny corpses, “mud caked in their hair, their toothless gums. Green, grimy liquid pruning their fingers.” She awakens in a hospital, calling for her child. A therapist evaluates her, says she’s in shock, and sends her home.

These first 15 pages set up a mystery to be unraveled: Who are all these people, and what has happened to Bianca to make her believe a doll is alive? But an opening should also draw the reader into the story, and this deluge of oblique hints, long descriptions, and out-of-context names is interesting but flat. However, in subsequent chapters, Bianca takes on dimension. And when the engine of the story finally kicks in, it’s propulsive.

In chapter one, Bianca is living with Matty, who pretends — on a doctor’s suggestion — that the doll is alive. Bianca is attending university and has just met Joshua, a nice man, the thrilling opposite of Gabe, who seems to be the cause of her trauma. Joshua, the guardian of a young nephew, is studying to be a youth counselor. His courtship of Bianca begins carefully. He’s entranced with her beauty and smarts; she loves that he’s a gentleman. Jubilee comes along on their first dates but is always asleep, so the truth is hidden.

Givhan navigates Joshua’s discovery of the doll with care. He’s already half in love with Bianca, and his field of study gives him an excuse to continue seeing her as research. Step by step, he’s drawn into the relationship, always questioning what he’s doing, but also captivated by her. The development of this connection between the two is one of the strengths of the book.

The novel has a complicated structure: It features two points of view (Bianca and Joshua), and the chapters alternate in time (before Jubilee and after). While the POV shifts are well handled, the time jumps can be frustrating. The reader becomes involved in a storyline, only to be whipped backward or forward. Once or twice, I longed to skip a chapter in order to continue on in one timeframe, most often when Joshua is working to understand Bianca and solve the problems in their relationship.

Joshua and Bianca together are a positive; the past with Gabe is a horror. He demeans Bianca in front of his family and abuses her both physically and mentally. She has two abortions, one while still in high school. Only Bianca’s deep reflections on her situation and her connection with Gabe’s mother offer relief in these sections.

The Mexican American culture surrounding Bianca is palpable: Descriptions of large family gatherings, mouthwatering food, celebrations, and tales from folklore stream across every page, as do portrayals of chauvinistic men (which make Joshua all the more appealing). Bianca’s worldview, unsurprisingly, has been shaped by this culture. As Givhan writes:

“When [a university friend] was in prep school, Bianca was planning life as a mother…because that’s what women in the Valley did, the brown women like her.”

Despite Bianca’s obsession with motherhood, she wants to be a poet and has wide-ranging interests in various art forms. Poetry and paintings (especially those of Frida Kahlo) thread through her thoughts. But because her university life is only peripheral — the novel is intensely internal — these reflections are undeveloped and serve only to show the Bianca who might have been and who, the reader hopes, may yet emerge.

Givhan is an award-winning poet, and it shows in the novel’s language. Most poems demand space on the page, and Givhan uses this to her advantage in the free-standing letters Bianca writes to Jubilee. But in other places, the author misjudges, and lyrical but dense paragraphs break the narrative flow.

That said, there are some glorious passages, such as this one describing a view of the Imperial Valley: “Stalks of alfalfa swayed…their shadows dusting the earth. Mound after sage-smudged mound, like burial plots as far as the basin stretched in every direction, a pelvic bone, a sopa bowl scraped clean.”

Or here, when Bianca imagines how her life could have been if she hadn’t had the abortions and become La Llorona, a ghost who roams the countryside mourning her own drowned children:

“If she’d chosen for herself…she would have chosen the one night a year the night blooming cereus uncoils its moon-white skirt, opens its opalescent throat, and allows the bats who’ve flown hundreds of miles with their young clutching to their fur as they swim through the air, half-starved from waiting, to drink their fill and feed their next generation of creatures who can see through the dark.”

Jubilee is a rich novel that rewards patience at the beginning, gains speed as traumas are uncovered, and leaves the reader rooting for Bianca and Joshua as they struggle to create a life together.

Terri Lewis recently moved to Denver. She lives with her husband and two dogs, Tango, who belongs in the circus, and Chloe, the mega-chewer. She’s currently editing a novel.