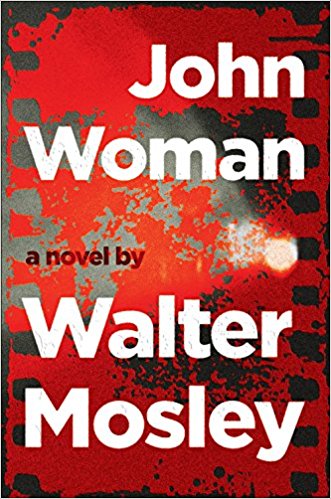 Few living writers are as revered as Walter Mosley, and deservedly so. Not just in the crime-fiction community, where the Mystery Writers of America named him a Grand Master in 2016; his talent is acknowledged through the literary world. His Easy Rawlins series guaranteed his place in the American literary pantheon, and other works have burnished his reputation by being as approachable as they are insightful.

John Woman is not such a book.

Cornelius Jones is the child of Herman Jones, a self-taught sharecropper from Mississippi who works as a projectionist in an East Village theater, and Lucia Napoli, the third-generation daughter of Italian immigrants. Herman and Lucia are oil and water, thrown together through circumstance.

They live near but apart when the book begins. When his father falls ill, 12-year-old Cornelius surreptitiously takes over the projectionist job so the theater owner won’t fire Herman. The two are otherwise inseparable, as Cornelius reads Herman’s beloved books to him for discussion later as the older man’s health fails.

Cornelius grows into an imposing intellect of his own. He takes a position at an unorthodox college in Arizona under the name John Woman for reasons best left to a reader to discover. John teaches “Introduction to Deconstructionist Historical Devices,” premised on the idea that nothing is what it seems; in fact, it isn’t even what it doesn’t seem. It may not even be something else. Needless to say, he’s a controversial person inspiring strong emotions on both sides.

While a crime is at its core, John Woman is not a crime novel. It’s a full-blown literary endeavor, with all the pluses and minuses that may entail. Full of symbols — or metaphors or allegory — the book is a deconstructionist history lecture writ large. In fact, much of the book revolves around a few key lectures John gives at the New University of the Southwest.

They’re intellectual exercises with no specific endpoint in mind, which is fine in a college setting where the teacher can play off the students’ responses to guide the discussion. In a novel, the author has the benefit of getting to create his own student responses, though nothing can be done to assuage the reader’s potential bewilderment.

A literary novel is a character-driven thing, with plot subordinate. The downside to this is that the plots don’t always make sense. Convenient coincidences that place the character in a position to exhibit the emotion or trait the author wants at a given time lurk around every corner.

Characters live double lives — which, admittedly, is much of the point of the book — that allow them to serve dual roles in the plot, much the way a small theater company may press actors into multiple minor roles. In the end, it’s all too convenient to be satisfying.

Another requirement for a character-driven enterprise is the believability of the characters themselves. There are problems here, too. John Woman gets the job at NUSW after faking a transcript that got him into Yale under a third name. Mosley leaves how he accomplishes this to the reader’s imagination.

In the end, though, John Woman isn’t about the characters at all. It’s about a point Mosley wants to make. No one talks to each other; they make speeches. Passages that inspire head scratching are followed by authorial asides to ensure you get this point. That can work within reason, but done too often, it disturbs the vivid fictive dream the best books strive to achieve in the reader.

Yet, it’s still Walter Mosley. There’s a momentum to the writing that pulls the reader through to the end. How the reader feels about the book after having gotten to the end, however, is an open question.