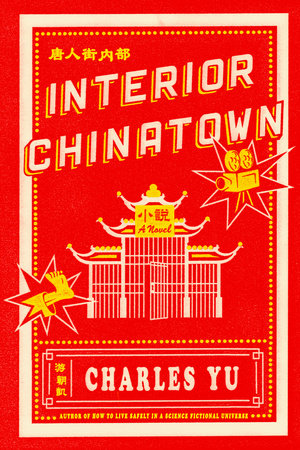 I have a friend who, like me, attended film school. He has an anecdote about the time he interviewed to be an assistant to a famous director. When this director asked if he liked to read scripts, my friend boldly answered no. He did not get the job.

There's surely a lesson to be learned about being too honest in a job interview, but it also reveals something I have heard many times about reading scripts. That they aren't made for casual reading.

If you read Charles Yu's Interior Chinatown (and I strongly suggest you do), you’ll find that it kind of looks like a script. Indented dialogue throughout. Rampant scene headings, one of which gives us our book’s title.

But it’s in the action where things are different. In these blocks of prose, Interior Chinatown reveals itself to be a stunning novel about identity, race, societal expectations, and crippling anxiety told with humor and affection and a deep understanding of human nature.

Our hero is Willis Wu, who plays Generic Asian Man in a nonstop production of a cop show called “Black & White.” It's a neat trick Yu pulls off here to have the show perpetually filming so that Willis is always performing his assigned role. He is what the show expects him to be every moment of the day, and it’s a feeling to which I think many people can relate, no matter the Generic subcategory in which they find themselves.

But Willis speaks to the Asian-American experience directly, and to his relegation to the background of the ongoing production. “Black & White” itself is a riff on police procedurals that I found to be laugh-out-loud funny, with the smoldering looks between the leads (one white and one black, naturally) and the detached way the two of them handle every pivotal scene.

Our hero finds himself involved in one of their investigations and begins moving up the hierarchy of possible roles available to Generic Asian Man. Suddenly, the coveted role of Kung Fu Guy is within reach.

So let's skip over whether or not I think everything in this book is happening just as it's laid out in the script (it feels real at times and allegorical at others) and instead talk about the rich backstories that Yu brings to the proceedings, such as that of Willis' aging father, who spends his evenings performing classic American songs at a karaoke bar:

"And by the time he's done, you might understand why a seventy-seven year-old guy from a tiny island in the Taiwan Strait who's been in a foreign country for two-thirds of his life can nail a song, note perfect, about wanting to go home."

In a lovely passage about the things Willis' mother brought with her to Chinatown many years before, we learn more about her than any exchange of dialogue could ever show:

"She brings seven pairs of underwear, two pairs of shoes. She brings an anxious disposition. She brings a rowdy, somewhat unexpected laugh, the kind that erupts suddenly in a noisy party and then just as quickly disappears."

There's a friend from Willis' college days who "goes on to star in American Dream — Immigrant Success Story, that rare variation, the mythical promised land, someone leaving Chinatown for the suburbs. Living amongst the mainstream, which everyone knows means whites."

Willis knows all of these stories, but he is unable to find his own. He's positive one of the available roles in “Black & White” will define him even as he struggles to understand what success would look like.

But while tales of Willis’ family might inadvertently diminish him a bit, they give the novel emotional resonance. It's when we step away from the TV shows and the never-ending filming and the fulfilment of societal roles that we see the hope each of these characters brought with them when they started their new lives.

A love interest for Willis named Karen Lee appears on “Black & White” as he attempts to make something of his new role on the show as a Chinatown informant. Going way off script, Karen challenges him to go beyond what is expected. When he tells her he's in love with her, she pushes back:

"She says that telling a love story is something one person does. Being in love takes two people. Putting her on a pedestal is just a different way of being alone."

Yu's knowledge of the inner workings of the entertainment world raises Interior Chinatown to the level of sly satire. Like all the romantic comedies we have ever seen, Willis and Karen must fall apart before they can truly be together. Willis will have to break out of the script to find himself and, perhaps, the life he has always wanted.

When I finished this slim novel, I passed my copy to the friend who doesn't like scripts. Interior Chinatown is so much more than that.

Josh Denslow is author of the collection Not Everyone Is Special, which arrived in early 2019 from 7.13 Books.