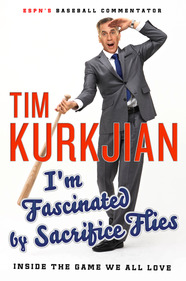 Religion requires two things of accepting human beings: faith and practice. You have to believe in what you are told and what you see, and you have to do something about that belief. With this personable little book, I’m Fascinated by Sacrifice Flies, ESPN baseball commentator Tim Kurkjian declares his faith and his practice: “I love box scores. I always have. So much so that for twenty years, from Opening Day 1990 until the final day of the 2009 season, I clipped every box score of every major league game from the nearest newspaper, and taped each into a four-subject spiral notebook.”

By my calculation, that would be about 48,600 box scores, which requires enough spiral notebooks to fill 15 boxes. While we can’t be sure what the faith is in this monumental gesture, one cannot doubt that this must have been the practice of a true believer.

Kurkjian lives and breathes baseball, and this practice has helped him to see more deeply into the game, to internalize the nuances in the same way decades of Bible study would prepare a priest to represent Jesus to the world. Think of Kurkjian as a Thomas Merton, doing the drudge work of actually counting the angels dancing on the head of the pin so that he can share a pure spiritual connection with his reader.

Each chapter of the book details some arcane aspect of the game (Hit by Pitch, Superstitions, Unwritten Rules, the eponymous Sacrifice Flies, etc.) that fascinates Kurkjian. He introduces us to players and writers he has met and worked with (including several DC and Baltimore favorites), and shares their obsessive outlooks and experiences. They all relate the same uncanny mental torment and besotted love for the game. They are all so far into it that the faith and the practice (insane and ridiculous as they seem) remain unquestioned. They are simply lived.

This is what drew me in as a reader. The depth of Kurkjian’s faith and practice brings us a list such as this, the names of various pitchers off whom Barry Bonds hit home runs: “Abbot and Castillo, Dustin and Hoffman, Murphy and Brown…Black, Brown, Greene, Redman, Whitehurst…Gardner, Painter, Carpenter, Brewer, Weaver, Cook, Hunter, Priest, Doc…”

There is also a chapter called Quirkjians, a “quirky…statistical oddity or something peculiar in the playing of the game or something that joins players from a hundred years apart in pairings and lists that make no sense.” He says, “They enhance my tremendous love for the history of the game,” and they indicate the reliance that fans place upon the Elias Sports Bureau to help facilitate those quirky connections.

“Mets reliever Jon Rauch, who is 6’11”, faced Astros second basemen Jose Altuve, who is 5’5”, which is believed to be the greatest disparity in height between pitcher and batter in baseball history.” In this case, Kurkjian may have neglected the time when Eddie Gaedel (3’7”) faced Bob Cain (6’).

You get the point. When you have collected 48,600 box scores and been a professional baseball analyst for some 30 years, you have at your disposal an incredible volume of manipulable material. Kurkjian does precisely what a reader wants with that mountain of information: casually recollecting, using pleasurable memories to sift, sort, pick up witty bits, and to laugh at the absurdity of it all.

The reader is provoked, too, grateful to Kurkjian for sharing his wonder, but you’d have to be a fan to enjoy this one. If you don’t like baseball, give this as a gift to someone who does. Although I can’t imagine a state of being that doesn’t include baseball fandom, I thank my lucky stars that I never felt the need to practice my faith in baseball with the same compulsive drive as Kurkjian. Rather, I’ve had to find a way to escape from my heartache over the various painful Cubs and Red Sox losses of my youth (’75, ’84, ’86, ’03, etc.). By the twisting of fate, I am a lay baseball fan.

Still, as I’m grateful to the priest who is my intercessor with the divine, so, too, am I grateful to Tim Kurkjian for his devotion to the great, beautiful mystery that is baseball.