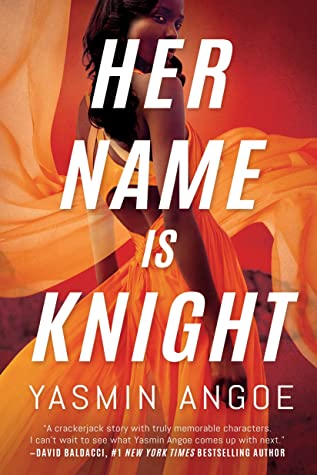 Nena Knight knows all about pain, but she also knows how to deal it out. Brutally taken from her small Ghanian village as a child and forced to endure unthinkable horrors, the girl Aninyeh is now the woman Nena — top assassin for a powerful syndicate known as the Tribe. Her mission? Liquidating the enemies of pan-African unity, which she does with guilt-free gusto.

With her adoptive parents and sassy sister by her side, Nena knows her place within the Tribe and unquestioningly follows orders. Until the dark demons of her past return to threaten her carefully reconstructed world.

Nena Knight has always divided her life into two parts: before and after. Her “before” was in N’nkakuwe, where she lived with her chieftain father and three brothers. But then her father’s enemy, Paul, descends upon the village with his thugs to exact a terrible vengeance on everyone. Aninyeh’s nightmare begins when Paul kidnaps her and the other girls to populate his profitable human-trafficking ring.

Sold to a sadistic Frenchman, Aninyeh suffers unimaginable torture at the hands of evil men and indifferent women before escaping into the streets of Paris. Her life of tragedy takes a turn when she crosses paths with Delphine Knight, a sophisticated and statuesque woman who takes the girl under her wing. Nearly feral in her mistrust of adults, Aninyeh struggles to answer a simple question put to her by Delphine:

“Who am I? I cannot be Aninyeh. I lost the privilege of her when she died with my family and my village…Like a ghost from the past, I pull a name no one has ever called me except Papa — his own special name for me.”

And so begins Nena’s “after” life: the adopted daughter of Noble and Delphine Knight, High Council members of a clandestine organization known informally as the Tribe. As she slowly starts to trust again, Nena learns about the African Tribal Council from Noble and her new sister, Elin. Consisting of a High Council of elders from around the world, the Tribe focuses on advancing the African cause of becoming a united entity, which sometimes calls for extreme measures.

It is within the Tribe that Nena finds her calling, or in this case, her call sign: Echo. She jumps at the opportunity to take her power back and no longer live in fear, preparing herself physically and mentally for years under the Tribe’s tutelage to become a trained assassin.

But on assignment in Miami to eliminate a federal prosecutor as a favor to an incoming High Council member, she realizes she’s been lied to about the fates of the men who killed her family in Ghana. Learning the murderous ghosts of her past are still alive, Nena defies her orders and kills the man standing next to her mark rather than the mark himself, eliminating a personal vendetta but creating fresh problems for Noble and the Tribe.

Things become even stickier when she rescues a spirited teenage girl from being jumped in a dark alley shortly after, only to find out the girl is Georgia Baxter, daughter of her intended victim, Cortland Baxter. Nena is drawn to the feisty and adoring Georgia — and soon, to her handsome and affable father. The unusual friendship stirs long-buried hopes for love and family Nena can’t reconcile with her bloody profession.

Can anything but killing make her feel alive again?

Yasmin Angoe’s debut novel is nothing short of mesmerizing, introducing an unforgettable protagonist and her very real struggle to overcome the trauma of the past via the violent reclamation of her own power. The prose is passionate and propulsive, shifting as it does between two timelines: Aninyeh’s “before” and Nena’s “after,” both reinforcing and revealing Nena’s complexity and inner struggle for connection and wholeness.

Her Name Is Knight is more than just another thriller in a glutted genre; it spotlights the often unspoken and grim reality of human trafficking and unflinchingly details the horrors of grief, loss, and oppression many women suffer inside Africa and out.

But it doesn’t stop there, and thank goodness. Nena Knight draws strength from her family (biological and chosen) and friends (old and new) and through her decision to reclaim her power. The pages never stop moving, and new fans of Angoe (like this reviewer) will eagerly await the next installment of Nena’s journey.

Peggy Kurkowski is a professional copywriter for a higher education IT nonprofit association by day and major history nerd at night. She writes for several book review publications, including Publishers Weekly, Library Journal, BookBrowse Review, the Historical Novels Review, Open Letters Review, and Shelf Awareness. In addition, she is the art director for the Saber & Scroll Journal, as well as an editorial board member. Her heavy history-reading diet is spiced up with the occasional mystery or thriller, which she also reviews. She lives in Colorado with her partner (quite possibly the funniest Irish woman alive) and three adorable, ridiculous dogs.