Half Broke: A Memoir

An outstanding reflection from a horse trainer attempting to reach both animals and inmates. 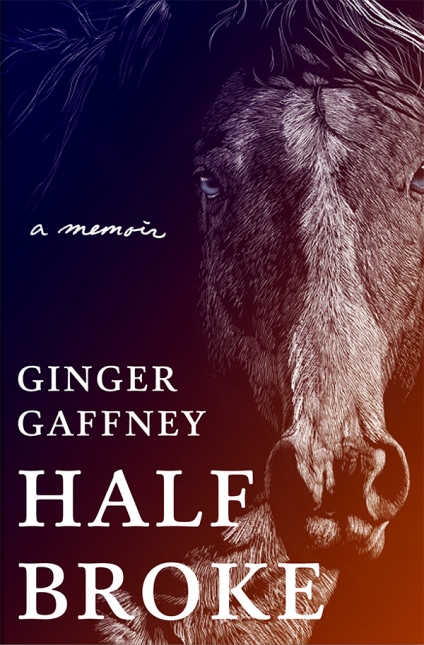 Two things can hobble those who write about horses. The first is technical language. Often, when equestrian writers try to reach a general audience, they get bogged down by the lingo. Discussions about rasps, leg yields, and latigos make non-horsey readers’ eyes glaze over. These readers don’t necessarily stray from a lack of interest, but from a lack of understanding.

The other challenge is that most of an equestrian’s communication with a horse is nonverbal. Often, the briefest flicker of an eye or a shift of weight speaks paragraphs. But translating those paragraphs can be clunky, strange, and strewn with bad metaphors.

Half Broke, the debut memoir by Ginger Gaffney, has neither of these problems.

Instead, Gaffney pulls off the impressive feat of translating horses and humans. She creates lyricism through experience, landscape, and empathy. Not only does she avoid the often cringe-worthy tropes we see regarding horses, but she also swerves away from stereotyping the incarcerated population in the United States.

Gaffney holds an MFA from the Institute of American Indian Arts and has been a horse trainer for over a quarter-century. Half Broke takes place in 2013-2014, when she got a call to a ranch just over the river from her New Mexico home. The place was a prison alternative for rehabilitating people convicted of a felony; instead of sitting in jail, they could provide much-needed help with the horses on the property.

When she arrives, Gaffney is confronted by a set of people and horses who have all been thrown aside in one way or another. Abuse, aggression, and impulsive survival-based behavior are prevalent in both the animals and their caretakers. As she continues her work, she sees incredible improvements all around, and discovers more about herself, as well.

As a trainer, Gaffney brings some hard-knock knowledge to her writing. There is a raw physicality in each scene featuring a horse. The human body is the most important tool when training horses, and it is also the thing most at risk. She is clear that horses — while life-affirming and beautiful — are perilous and expensive, both financially and emotionally. When describing one of the ranch’s horses, she states:

“Over 20 years ago, Willie was donated to the ranch. All the horses come here as ‘donations.’ But there is no such thing as a free horse. Horses are given away because they are difficult, unbroken, contentious, and sometimes dangerous.”

Gaffney brings a similar nuance to her depictions of the people she meets. Yes, all of them came from prison. And, yes, most have faced addiction and disenfranchisement. But they are neither victims nor villains. Instead, each character is portrayed with humanity and a deep complexity.

As her students’ lives unfold, Gaffney reveals her own. She outs herself as an introvert and a lesbian. Her disclosure and the quietness of her writing are a refreshing change from the dominant narrative that American horse culture is loud, deeply conservative, and heteronormative.

Half Broke is also a book steeped in place. Even though it loves the West, it refuses to look away from the region’s hard bits. The high desert landscape is never center stage, yet it is always present. The dust and extreme sun seep through the scenes in a way unique to those who write well about that part of the country.

Gaffney’s home is only a 45-minute drive from Taos, which is famous for its high-end boutiques and prevalence of Hollywood stars’ second homes. Yet the author notes that poverty and despair plague her state. There is more than one New Mexico, just as there is more than one horse experience and more than one America. Which one you live in often depends on what you have in your pockets.

The healing power of horses is not a new concept. It’s been explored across art forms. But narratives featuring equine therapy programs for veterans, autistic children, and others can often feel too sweet or tidy. This isn’t the case with Half Broke. The healing here is hard-won, subtle, and small. And that makes it all the more miraculous.