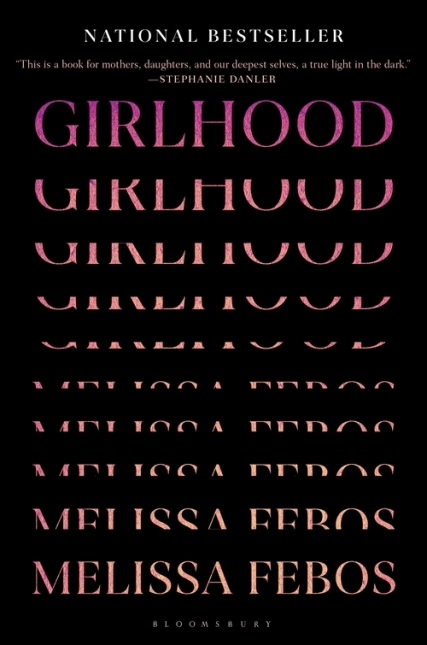 In “Wild America,” one of the eight essays that make up Girlhood, Melissa Febos describes roaming the woods of her Cape Cod childhood, inventing games, testing her body with physical challenges, and feeding her hungry mind with words.

“The body was a weird unfathomable masterpiece,” she writes. “It always felt good to know that I could easily climb the enormous oak tree beside our driveway, swim to the center of our pond, exert a concrete power on the physical world with my own two hands.” She exulted in her “feral sensibility,” her animal nature.

But at the age of 10 or 11 — the point at which her “childhood became more distinctly a girlhood” — something changed. Suddenly, rather than being strong and resilient, girls were expected to go against their very nature, to become “the weakest and smallest and most infantile. We seemed to spend all of our resources withering ourselves to be attractive to males. The goal was to be as soft and tidy and delicate as possible. It made no sense at all.”

Febos set on a course of self-loathing that led her, by the age of 13, to feel that she had “divorced” her body. “To hate my own body was to suffer from an autoimmune disease of the mind,” she writes. But to rid oneself of the disease is not a matter of simply assigning a diagnosis:

“It is possible to understand intersectional feminism and still have parts of your own mind believe that your worth correlates exactly to your desirability to men. Consciousness doesn’t preclude false consciousness. It is one of feminism’s raisons d’être.”

It is also one of Girlhood’s raisons d’être. This collection of wide-ranging essays blends memoir with mythology, pop culture, history, psychology, and primary research to scrutinize the ways in which girls, as they mature into sexual beings, are compelled to redefine their identities to conform to a narrow set of narratives inscribed by our patriarchal culture — and the untold harm these restrictive stories have on women’s lives.

“I no longer think that the pains or darkness of my own girlhood were exceptional,” Febos writes in her author’s note. She continues:

“It is a darker time for many than we are often willing to acknowledge. During it, we learn to adopt a story about ourselves — what our value is, what beauty is, what is harmful and what is normal — and to privilege the feelings, comfort, perceptions, and power of others over our own. This training of our minds can lead to the exile of many parts of the self, to hatred and the abuse of our own bodies, the policing of other girls, and a lifetime of allegiance to values that do not prioritize our safety, happiness, freedom, or pleasure.”

In attempting to trace these conflicting narratives — and their lasting effects — in her own life, Febos has written here a work that is both an exposé and a corrective, a memoir and a polemic. Author of the memoir Whip Smart and the essay collection Abandon Me, she once again turns her keen intellect and unflinching honesty toward myriad personal stories — her experiences as a sex worker, drug addiction, sexual relationships with men and women — that have wider implications for girls’ and women’s narratives. Neither self-indulgent nor guilty of navel-gazing, Febos writes about herself always in the service of her larger project: to dissect the long-term ramifications of the societal narratives forced upon girls and women.

In “The Mirror Test,” she examines the “bifurcation” of her identity that she experienced in her teen years. Forced to contend with multiple competing narratives — “around other girls I was fat and misfit, condemned by some inherent flaw in my body’s constitution,” while “around men I was desirable, possessed of a flickering power that I did not know how to control” — Febos flounders as she grasps at the limited identities being offered her.

What is the outcome of such amalgamation? “The self becomes a collaboration with other people, a series of fantasies that lead to ‘the armour of an alienating identity,’” she writes, quoting Lacan. “Have you ever seen a suit of armor? There are so many pieces. Here is where a strange man named me. Here is where the girls stared. Here is the school report card. The plates clink and move together like one. The self underneath is invisible to others.”

As a result of this ceaseless accumulation of identities, “A woman must cultivate the public self and the real self. Somehow, you must keep that fragmented self, no matter if Lacan tells you it’s impossible. Your life depends on its management.”

In addition to a thorough examination of the socially constructed self, “The Mirror Test” offers much more: an exploration of the history of the word “slut,” an analysis of the film “Easy A,” and a sensitive reading of Lily Bart’s bifurcated identity in The House of Mirth. Febos’ roving intellect, linking seemingly disparate topics to illuminate underlying connections, is a hallmark of her work.

Febos often supplements her own experiences and her scholarship with in-depth surveys of other women. For example, in “Thank You for Taking Care of Yourself,” she investigates “skin hunger” — or touch deprivation — as she attends a “cuddle party,” explores the phenomenon of “empty consent,” and gives voice to the experiences of other women.

Cuddle Party, an organization founded in 2004, hosts gatherings across the U.S. where touch-deprived people can experience consensual, nonsexual physical intimacy. The parties emphasize “not simply consent but enthusiastic consent.” Attendees must ask permission to initiate physical contact; even after giving consent, according to the official rules, “You are encouraged to change your mind.” Also: “If you’re a maybe, say NO.” In other words, consent is active and ongoing.

At her first party, Febos finds herself giving consent to a man even though she feels ambivalent about being touched by him. Despite knowing the rules, she does not feel empowered to say no or to change her mind. “That is, whatever the culture of the cuddle party, the culture inside me presented its own dictates,” she writes. Encouraged by her girlfriend (who attended with her), Febos then works to examine what it is inside of her — inside many women — that compels her to consent against her own desires.

In a survey Febos conducts of 30 women — mostly in their 30s and 40s, educated, middle-class — all reported having experienced “nonconsensual touch.” Some women reported that being touched without consent “happened all the time” and was part of “being a woman.”

Febos concludes that such nonconsensual touch from childhood on “is perfect training for a lifetime of consenting to touch one doesn’t want.” In many cases, women gave “empty consent” because they “feared something worse.” That is, women agree to be touched in some ways so they won’t have to be touched in others.

The reason that Febos — who identifies as a queer woman — felt compelled to give consent to the man at the cuddle party was that she, like other women, had internalized “the male gaze.” Even as she has broken free of patriarchy in some ways, she is still bound to it in others:

“The more I think about it, the more amazed I am that anyone realistically expects young women to easily say no to anything…[because women]…have spent their entire lives being socialized not to upset or disappoint people.”

The cuddle party, in addition to providing necessary touch to those with skin hunger, also teaches an important tenet of self-care: “What if we had learned that saying no was a necessary way of taking care of ourselves?” And the party serves as a way of re-socializing men — asking them to take a “no” at face value, to respond to rejection with a simple, “Thank you for taking care of yourself,” and then to move on. For these reasons, Febos writes, “The work these parties are doing and making space for is revolutionary.”

Toward the end of the essay, Febos — at long last — begins to feel the rift that has divided her identity for so long begin to close. “My body, I was realizing, was not the box that held myself, it was my self.” To care for the self also means to know the self’s desires, as “consent is a form of communication that happens first within the self.”

This theme of self-care continues and is further developed in the final essay, “Les Calanques,” where we see Febos, on a writing retreat in France, following a regimen to provide for her physical, psychological, and emotional needs.

Melissa Febos, who eloquently describes the patriarchy as “an elegant machinery whose pistons fire silently inside our own minds, and whose gleaming gears we mistake for our own jewelry,” makes great strides in exposing the inner workings of that machine. Girlhood is a book that deserves to be savored, to be read more than once, to be given to all the people in your life — not just the girls and women — because we are all responsible for ensuring that every person be able to live by their own narrative.