Ghosts of Gold Mountain: The Epic Story of the Chinese Who Built the Transcontinental Railroad

Giving a voice to the nameless men who toiled on the tracks. 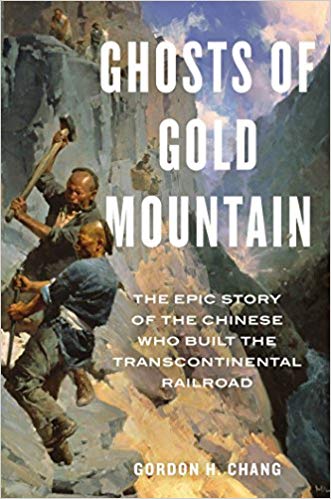 Gordon H. Chang’s Ghosts of Gold Mountain: The Epic Story of the Chinese Who Built the Transcontinental Railroad is a meticulous, sincere effort to restore to the public mind the lives and struggles of the Chinese workers who made possible one of the great engineering miracles of the age. Its publication is timed to coincide with the 150th anniversary this month of the famous linking up of the two ends of the tracks via the driving of a golden spike at Promontory Summit, Utah, in 1869.

Chang, a professor at Stanford who helps run the university’s history project on the Railroad Chinese, has dedicated himself to speaking for a group that cannot speak for itself, even in absentia. He’s dubbed them the “ghosts” of his title because, while the work they did was about as tangible as it gets, their individual identities have evaporated.

(Gold Mountain was not a specific peak in the railroad’s path but a generic term among the Chinese for America, signaling one of the main allures of coming here.)

Chang begins our journey in the humid Pearl River delta around modern-day Guangdong in southern coastal China, the birthplace of most of the Railroad Chinese. More open to the outside world and its economic possibilities than the rest of the nation, this region had developed a culture of emigration.

The author then carries us eastward, across the Pacific, onto the bustling docks of San Francisco and eventually inland to the gold mines and farm fields of a slowly populating California. His prose gains strength and beauty as the Railroad Chinese ascend the peaks of the Sierra Nevada and work slows to a grinding push.

Chang fact checks the fact-checkers who’ve debunked as myth the story of workers in suspended baskets drilling granite, showing through multiple eyewitness accounts that the Chinese did, in fact, brave such perils.

He also makes the case that even though a strike by the Railroad Chinese obtained no immediate improvement in pay or working conditions, its demonstration of organizational ability and peaceful determination impressed company management into a more respectful attitude toward their workers. He, too, dispels the image of the servile Chinese “coolie” prevalent at the time.

Tens of thousands of Chinese worked on the project, and Chang estimates their literacy rate was high. Still, while they maintained connections with family back home, no researcher has yet discovered a first-person narrative by a Chinese worker describing what the experience was like.

But theirs was quite a story to tell: igniting blasts big enough to throw boulders hundreds of feet in the air; burrowing through (and sometimes living under) 20-foot snowdrifts in the High Sierra of California and Nevada; dangling over cliffs in woven baskets to chisel holes in the rock face and stuff them with explosives — all the while contending with widespread racism and the dangerous negligence of employers at the Central Pacific Railroad.

Throughout the book, Chang uses his scholarship and empathy to try to make up for the frustrating lack of firsthand accounts and succeeds in painting a vivid picture of the past.

By the middle of the 19th century, the United States was a continental power, but the trip from one side of that continent to the other was long, arduous, and full of danger. Work on the western end of the Transcontinental Railroad began during the Civil War. The war and its aftermath influenced perceptions of both the ambitious project and the Chinese who made it possible. Reporters sent to cover the construction heard literal echoes of battle in the explosions used to blast tunnels.

The symbolism of the railroad binding up the recently ruptured nation was widely appreciated at the time. And the relatively enlightened thinking on race that emerged from the war — the redemption by blood of the nation’s founding creed of equality — extended to the Chinese.

That initial acceptance was deepened by the diligence and skill the Railroad Chinese exhibited on the Transcontinental. Chang quotes several commentators welcoming the “coming race” of hardworking Asians as a boon to the United States.

Of course, not everyone was open-minded. Congress held hearings on the dangers of immigration, which included the again-familiar complaint about jobs being stolen from the native born. As the two ends of the railroad grew nearer together, Irish-immigrant workers from the east tormented their Chinese counterparts.

A few years after the railroad was finished, the economic downturn of the 1870s dried up any remaining magnanimity: Congress started passing Chinese exclusion acts, and Chinese residents of western towns were attacked, murdered, and mutilated by white mobs.

Yet, ironically, rather than relying on immigrant labor for desperately needed infrastructure repairs and improvements here at home, the most talked about public-works project these days is a wall to keep immigrants out.