For the Good of the Game: The Inside Story of the Surprising and Dramatic Transformation of Major League Baseball

In compelling fashion, the former MLB commissioner recalls the pivotal moments of his tenure. 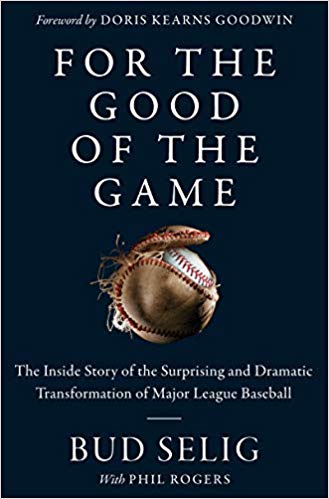 As he led Chrysler’s turnaround in the 1980s, Lee Iacocca coined a phrase that became his company’s slogan: “If you can find a better car, buy it.” For those who follow baseball, this reviewer offers a similar endorsement of Bud Selig’s memoir (co-authored by esteemed sportswriter Phil Rogers), For the Good of the Game: If you can find a better account of Major League Baseball’s most important issues and changes over the last half-century, read it.

Our National Pastime has probably never had a more passionate true believer than the man who led it as commissioner from September 1992-January 2015. In his book, Selig admits baseball has been “the essence” of his life. He takes great pride in that, since there’s “something sacred about the relationship between a city and its baseball team” which involves “community trust” and a “social responsibility” to its fans.

Selig is now 85 and has been going to ballgames in Milwaukee since he was 3. His Ukrainian immigrant mother took him to see the (then) minor-league Brewers beginning in 1937, and he cheered them on until the Braves came to town in 1953. He then moved his loyalty over to the big league club and kept it there until the team left for Atlanta in 1966, after Selig narrowly (4-3) lost the Wisconsin Supreme Court appeal of his lawsuit aimed at keeping them in Milwaukee.

Not giving up, he induced the Chicago White Sox to play several “home” games in his hometown’s County Stadium during the ‘68 and ‘69 seasons to prove to then Commissioner Bowie Kuhn that his city deserved a second chance at a Major League franchise.

A year later, he bought the American League’s one-and-done expansion franchise, the Seattle Pilots, for $10.8 million and moved them to Milwaukee, where they became the Brewers. Though his family sold the team for $223 million in 2005, since retiring as commissioner, he’s been a fixture at Brewers games.

In his book, Selig pulls no punches. Like everyone not named Pete Rose, he adored Bart Giamatti, though he has almost nothing good to say about other predecessor commissioners Kuhn, Peter Ueberroth, and Faye Vincent.

Given his close, 60-year friendship with Henry Aaron and high regard for star players like Derek Jeter and Tom Glavine who resisted the temptation to take drugs during baseball’s steroid era, Selig opens his book describing the contrast between thoroughly unlikable Barry Bonds and straight-up guy Aaron (“as fine a man as I’ve ever known”), and his agony over having to watch the pumped-up Bonds break the clean and lean Aaron’s career home run record.

Selig’s many disparagements scattered throughout the book peak with his entertaining account of President Clinton and Vice President Gore’s ill-fated effort to end the 1994 players strike. Regardless of their positions as leaders of the free world, Bill and Al got to feel the full force of Selig’s wrath when they disrupted the negotiations guided by their false assumptions.

Selig’s 23 years as MLB’s commissioner produced the many important changes detailed in the book. Among other things, he expanded the postseason by adding a third division and two wild cards in each league; implemented interleague play during the regular season; used instant replay to correct umpires’ calls; and created the World Baseball Classic.

Most importantly, he successfully dealt with the game’s two biggest problems: the lack of parity between big-city and small-market teams (which almost caused some franchises to fold), and players’ use of performance-enhancing drugs.

On the issue of team parity, until Selig persuaded owners to share their revenues, small-market teams lacked the resources to compete with elite franchises in signing free agents, which meant they rarely made the postseason. Such lopsided disparity had risen out of owners losing round after round to the players union in collective bargaining agreements, which had caused players’ salaries to skyrocket. This imbalance resulted in declining attendance and operating deficits that put several ballclubs on the brink of bankruptcy.

The biggest stain on the game during Selig’s reign, however, was ballplayers’ drug use in the 1990s and early 2000s, though he explains how it ironically became the issue that brought the powers of the owners and players union into balance.

Selig ably details why the negotiation dynamics changed in 2002. By then, owners were losing $175 million a year, with team debt spiraling from $2.1 billion in 1999 to $3.1 billion in 2001, as player salaries ate up two-thirds of teams’ revenues and getting players to agree to a salary cap (like the NFL and NBA had) was impossible. The crisis became so severe, it appeared MLB might have to eliminate some struggling teams, which would mean fewer jobs for players.

Selig views the 2002 labor negotiations as being “the most critical work” he did as commissioner. Despite former players Ken Caminiti and José Canseco’s published admissions depicting how steroids fueled their home run power, the players union buried its head and refused to agree to drug-testing, claiming it would be an invasion of privacy. The first congressional hearings on drugs in baseball, led by John McCain, took place that year and elevated the problem to a higher platform.

The solution began when a poll in 2002 revealed 79 percent of MLB’s active players favored drug-testing so all could compete on a level playing field, as steroid users’ statistics proved beyond a doubt that they were playing the game with a major competitive advantage. The voices of the clean players, retired Hall of Famers (whose career numbers were diminished by that era’s home run explosion), owners, fans, parents of high school ballplayers who died from steroid use, and Congress all sang in unison until the players union caved.

In time, supported by the findings of the Mitchell Report (which Selig ordered and had the teams fund), MLB implemented the strongest drug-testing program in all of sports.

Selig deftly weaves together how the resolution of this final stumbling block brought the power of the owners and players into equilibrium. It combined with the money machine from MLB’s internet business, the opening of 20 new revenue-enhancing ballparks, lucrative television contracts, the wild cards’ expansion of teams and games in the postseason, and revenue sharing to bring parity and economic stability to the National Pastime. In the last eight years, 26 of the 30 big league teams have played in the postseason, and in the 21st century’s first 18 years, 12 different ballclubs won the World Series.

After retiring in 2015, Selig was elected to the National Baseball Hall of Fame in December 2016. On his plaque, after the listing of his many career achievements during his years as commissioner, his efforts to leave baseball in better shape than he found it are summarized by five words: “Bridge builder and devoted fan.”

No one in baseball history ever melded the owners into a cohesive functioning unit until Selig came along. And, then, as his greatest triumph, he brought owners and players together into a virtual economic partnership that now has the game thriving on all fronts.

For the Good of the Game could have been titled “Saving Baseball,” and Bud Selig turns this uplifting story into a compelling read about how he overcame one obstacle after another off the field in order to preserve and improve the quality of the game on it.

Talmage Boston is an historian and lawyer in Dallas, Texas; the author of two baseball history books; and a Media Member of the Texas Baseball Hall of Fame.