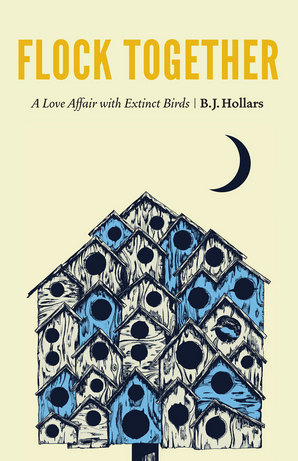 While visiting friends over Easter weekend, I happened onto their copy of Cornell Lab of Ornithology’s Bird Songs from Around the World, a clever 2006 publication describing 250 North American birds and allowing you to hear their calls by simply pressing a button.

I randomly opened the book to a spread on the ivory-billed woodpecker and got a kick out of the bird’s song, recorded in 1935. The text told me that the bird had been thought to be extinct for several decades but had been spotted, fleetingly, in Arkansas in 2004.

Within a few years, many felt that the rediscovery was a product of wishful thinking and the easy confusion of the ivory-billed woodpecker with another bird still very much with us, the pileated woodpecker. No reported sightings since have checked out.

In Flock Together: A Love Affair with Extinct Birds, B.J. Hollars writes with considerable humor about how things like that happen, while at the same time gently reminding us that ecosystems are like Jenga: Losing one piece risks the rest.

Hollars, an associate professor of English at the University of Wisconsin Eau Claire, is an amateur birder who doesn’t hesitate to acknowledge that his best chance to identify a bird is if it’s confined to a canvas or in a labeled drawer at a museum.

He admits, “I’d been living among them my entire life, yet unless one saw fit to shit on my shoulder or dive bomb my dog, I’d rarely paid them any heed.” But he’s a dedicated reporter and a fine storyteller, and those qualities make this unlikely collection of essays a joy to read.

The ivory-billed woodpecker makes more than a few appearances on the pages, despite its rarity in real life. So does the passenger pigeon, once the most abundant bird on earth but slaughtered in unimaginable numbers; the last passenger pigeon died in 1914 at the Cincinnati Zoo.

Hollars takes readers along on various quests related to the long-gone birds, finding both entertainment and educational value in diaries and sketches left behind by birdwatchers whose skies were a bit different than ours and studying “endlings,” the last representatives of a species.

What’s to blame for extinctions? Habitat loss due to human encroachment is often the culprit. Outdoor cats take a toll, and so do windows that are invisible to birds. Sometimes it’s Mother Nature herself, as was the case when a hurricane wiped out nearly all the dusky seaside sparrows on their small island territory. (The endling lived out its remaining days at a Disneyworld reserve and died in 1987.)

And then there’s humans with guns. Historically, birders “collected” specimens for examination (or for the heck of it) by shooting them. Hollars explains how a wealthy man traveled the world and killed more than 19,000 birds — a collection that outgrew the man’s home and led to him donating it to the Field Museum in Chicago in 1893, which promptly rewarded him a lifetime appointment as curator of ornithology.

In the 19th century, Christmas Day celebrations included “side hunts,” when people shot as many birds out of the sky as they could. It’s the sort of carnage that wiped out the passenger pigeon. The holiday tradition faded after 1900, when the editor of Bird-Lore magazine made the eminently sensible suggestion to simply count and admire birds instead.

The snag for today’s kinder, gentler birdwatchers, of course, is that the unhindered objects of their attention often fly away before it’s possible to get a good look — rarely a problem for hobbyists who collect, say, stamps or coins or dolls or baseball cards.

Hollars observes that alternative hobbies also seem remarkably attractive when you’re leaving the house to join other birders before dawn on a very cold Wisconsin morning to spend a few hours shivering and squinting at feathered blobs through binoculars.

Like most birdwatchers, Hollars is nervous that he’s the least-knowledgeable person in the group, and hilariously proves that might indeed be the case even as they drive: “I pull my weight by identifying every fake bird in the tri-county region, the excitement rising in my throat again and again as I spot several wood-carved owls propped atop telephone poles, not to mention a few paint-chipped Pileateds fastened to fence posts.”

Several of Hollars’ stories of birding adventures include members of his own flock. When he went off to college, his parents filled their empty nest with Harley, a seemingly angry parrot who turned out to be depressed. A vet told the family to try various things to make the bird feel at home, but Hollars sadly realized, “It’s not his home. This isn’t even his continent.”

Years later, he watched with his own son as a rabbit in their yard managed to escape a hungry owl — fascinated by what he was seeing but hoping there wouldn’t be a messy outcome requiring an uncomfortable explanation.

But later still, when he arranged to visit the Field Museum to see a specimen of an ivory-billed woodpecker that’s preserved in a drawer, he negotiated a deal with his less-than-thrilled family: “In exchange for a hotel with a pool within walking distance of Navy Pier, I’ll get to spend some quality time with a dead woodpecker.”

Many of us have surely made trades like that one. But few of us have done as good a job of explaining why, as Hollars does in Flock Together. Each essay in the book underscores the reality that there are birds we may be seeing for the last time, birds that won’t be here in the future. As Hollars observes, in an all-too-literal sense, the only refuge for some birds is in our heads.

Randy Cepuch, author of A Weekend with Warren Buffett and Other Shareholder Meeting Adventures (Basic Books, 2007) and an amateur birdwatcher, helps select titles for coverage by the Washington Independent Review of Books. Last year, he brought home more than 200 advance reading copies from Book Expo, read a quarter of them, and liked Flock Together best of all. And if you’re still skeptical that anything largely about dead birds could possibly be amusing, consider this.