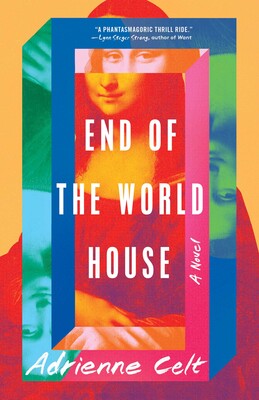 Adrienne Celt’s third novel, End of the World House, delivers a deeply personal story about the durability of friendship against a backdrop of a broken world that seems just a few moments into our own future and so is both relatable and terrifying.

Bertie and Kate, young professionals in the Bay Area, trace their friendship to adolescence. They have seen each other through early loves, college, and career triumphs and disappointments. They have at times been as close as a married couple and as distant as near strangers. As the story begins, Kate is planning to move to Los Angeles, while Bertie has given up her ambition to become a respectable cartoon artist and instead draws the cheeky dinosaur mascot — meant to signify a corporate vision of whimsy — for her Silicon Valley employer.

Before Kate moves, the two decide to take a trip to Paris, where they are invited to an after-hours tour of the Louvre. What they find there — together but somehow alone in the world’s most fabulous collection of art — is that they’ve been sucked into a vortex of time, a kind of temporal Scylla from which no traveler can emerge.

They become separated, and we largely follow Bertie as she navigates what feels like a dream where she has a goal and a destination (to find Kate and get out) but can’t make any progress. It turns out that this time prison isn’t entirely random, that others are trapped with them, and that at least one figure can manipulate conditions (though to say how and why would spoil some surprises).

The adventure and the relationships play out as the characters, cocooned, are able to explore their own stories. But author Celt always reminds us of the outside world. Tech companies and their billionaire owners still reign. Consumerism and Instagram endure. But Americans rarely travel abroad because there’s terrorism — including dirty bombs — everywhere. The rainforests have been burned. Huge chunks of the icecaps melt; gas, electricity, and water are rationed. Society is about to collapse, yet people continue on as if nothing’s wrong.

Celt deftly navigates a storytelling conundrum by condemning the inward focus of her characters while acknowledging that, in the face of problems too large for any individual, personal issues matter deeply. Thus, the question of whether Bertie and Kate can maintain their closeness feels significant even as the nation suffers through endless war and an energy crisis. At the same time, the author satirizes our shortsighted impracticality and inability to decide what’s really important, much less to focus on it, as in this scene from Bertie’s office, where the boss, Hiro, tries to rally his employees around a common corporate ethos:

“‘The point is,’ Hiro said, pointing to them with the pen, now in his dominant hand, ‘there’s more to life than just administering flu vaccines and rebuilding roads. The world wasn’t built on roads…The world was built on vision.’”

Bertie, an artist off her path, is aware it’s superficiality like her boss’ that leaves us unequipped to deal with important issues, whether related to climate change, politics, culture, or each other. At one point, she describes a character gesturing like Edvard Munch’s “The Scream” but then realizes, to her horror, that in her vision, he looks like an emoji.

She suspects she’s not tough enough or ready to sacrifice for herself or the planet. After all, “She was a fan of luxury, all the comfort that money could buy, and how it could soften the world around you.” But that comfort can’t really soften a world so ragged. At best, it might conceal the edges.

End of the World House is thoughtful, funny, provocative, and creative. That Celt is also a successful cartoonist brings not only wit to her work but also connection between the writer and her protagonist. While there’s a temptation to compare the book’s time-bending elements to pop-culture products like “Groundhog Day” or the streaming series “Russian Doll,” there is also in Celt’s never-ending museum an echo of the infinite library of Jorge Luis Borges, and in her ruined world where we can only do the best we can, of Samuel Beckett. The author has triumphed by rendering a personal tale against a backdrop of global significance.