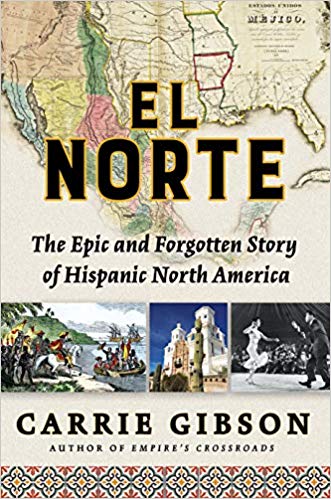 Nowadays, we yanquis wrangle incessantly over immigration, “powerful” walls, and the putative criminal urges of the border-crossers whose ancestors have shared our tenancy of North America far longer than most of our own forebears.

Carrie Gibson’s ambitious El Norte arrives at a pivotal moment for North Americans on both sides of the southern border, chronicling 600 years through the lens of Hispanic-infused geography, culture, and governance. In the telling, she provides a revealing historical perspective on our current political climate.

From today’s vantage point, very little of this complex and often bloody saga is admirable or inspiring. Still, Gibson tells it with authoritative gusto and in exhaustively researched detail. For the most part, this is a rapid-fire documentary account, almost year by year, of milestones, pronouncements, and events starting with the European conquest of the Caribbean and culminating in the present.

As the book progresses into the last two centuries, though, it seems to shift from a bird’s-eye perspective to a slower, more ground-level view of the U.S. societal forces that are often arrayed in opposition to individuals and matters Latino.

If you’re a reader who responds to facts, dates, and painstaking reportage, this is the volume to consult. It’s a hefty resource, and reading it cover to cover might seem an equally hefty investment of time.

But there’s good news here for the intrigued but time-pressed: Gibson’s book rewards browsing, offering a marvelous timeline, a great selection of illustrations, a solid bibliography, and a deep index. El Norte overflows with rich detail, revealing often startling truths that this reviewer, for one, never encountered in the textbooks of his adolescence.

Take the Louisiana Purchase, that much-touted milestone of 1803. While we know that France was the seller and President Thomas Jefferson’s government the buyer, what’s less familiar is that this vast tract was Spanish territory until 1800. That’s the year Spain ceded it to France by treaty, with the proviso that it not be sold. (We know how closely Napoleon observed that injunction.)

Gibson reports on related developments on the U.S. pop-culture front, too, notably the emergence of Hispanic-rooted music starting in the 1920s and continuing to this day. Hollywood jumped on a parallel trend with a spate of Hispanic-tinged films and starlets in the ‘30s and ‘40s, and TV followed in the ‘50s, not merely with Lucy and Desi, but with “Zorro,” too. (The author is largely silent on issues of movie/TV stereotyping of Hispanic characters, but maybe that’s another book.)

Gibson touches on broader concepts that are less cheery, as well. To wit: the westward march of U.S. hegemony, inspired by conceptions of Manifest Destiny and, as Gibson points out, framed as fact by Gilded Age historian Frederick Jackson Turner. If we follow Gibson’s close marshalling of events, dates, and declarations, it’s not a big leap to conclude that this expansion was fueled in large part by acquisitiveness rooted in self-conceived Anglo-European privilege.

These attitudes persisted long after large-scale territorial growth slowed. Listen as building engineer Montgomery Meigs describes, in 1878, the planned frieze that was to ring the U.S. Capitol’s massive dome. The frieze, Meigs crows, would depict “the gradual progress of the continent from the depths of barbarism to the heights of civilization…the gradual advance of the white, and the retreat of the red races…”

Or consider Blanton Winship, the appointed governor of Puerto Rico from 1934 to 1939, opining on the capacity of the Puerto Rican population to govern itself: “[They] could not supply the brains, character and other equipment necessary for carrying on the government of the territory.”

These persistent attitudes supply some context, perhaps, for our current president’s characterization of today’s asylum-seekers in Mexico as comprising hordes of rapists and “bad hombres.”

More broadly, in Gibson’s hands, these attitudes expose the roots of the ludicrous hustle of divinely ordained “American exceptionalism” that has colored our institutional relations with Hispanics and Native Americans since our country’s inception.

Rising out of Hatred