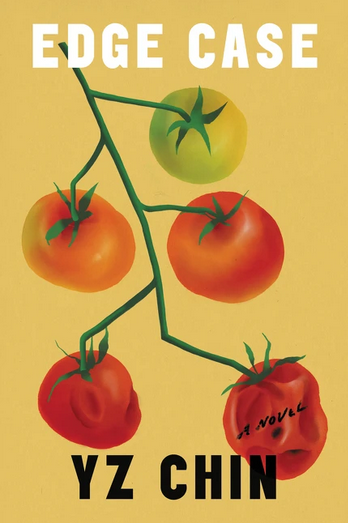 One afternoon in the summer of 2018, Edwina returns home from her job as a quality-assurance analyst at an AI startup in Manhattan to find her husband, Marlin, has packed up and left their studio apartment with no explanation. So begins YZ Chin’s Edge Case, a quirky exploration of marriage, immigration, identity, and what it means to live at the margins.

Edwina’s engaging first-person narration alternates between two storylines: her search for Marlin in 2018 and the history of their relationship. Marlin is half Indian and half Chinese (or “Chindian”), and Edwina is ethnically Chinese, but both were born and grew up in Malaysia.

They met in New York at a Lunar New Year party at a fellow Chinese Malaysian’s apartment where the “attendees were all from some country that was neither the United States nor China, and we all identified (or were identified via peer pressure) only with the aesthetics of being Chinese. We wanted the five-thousand-plus years of culture, the history of world-changing inventions, and the somber respect due a sophisticated ancient civilization, but we disavowed the clichés of squatting on toilet seats or spitting on sidewalks, not to mention the Communist Party.”

After marrying, both secure jobs in the Silicon Alley of Manhattan on H-1B work visas with plans to ask for green-card sponsorship from their employers. Edwina explains their predicament: “Unless our employers could be persuaded to sponsor green cards, we would soon have to leave the country for Malaysia or become undocumented when our paperwork expired.” When Marlin disappears, she’s forced to reevaluate her goals.

As the only woman working at AInstein, and the only “tester,” Edwina is tasked with writing “tests that would catch the engineers’ bugs before they could make their way out to customers.” Though her background is in English literature — she’d originally come to the U.S. in 2008 to study English in college — Edwina nonetheless sees her employer’s mission as aligning with her own values. “If I could make Americans laugh, then I would be accepted. I would be embraced and admired.”

She explains why the job working on a joke-telling robot appealed to her:

“You can understand why I was so eager to work at AInstein. A robot that could intelligently tell jokes! A selfless companion that would lift spirits, albeit in the form of a crude metal head attached to a (so far) immobile body. When I first started looking into tech jobs, it was solely because I knew that the industry was the biggest sponsor of green cards, and I needed one. Imagine, then, how lucky I felt to land a job that aligned with my more secret ambitions.”

As Edwina searches for Marlin, she reflects on the recent changes in him, noting that his behavior had grown “erratic” since the death of his father. “The Marlin I fell in love with was intelligent, logical, and curious,” she notes, but “my last memories of my husband are of him shouting accusations at me and going on about ghouls from an unseen world, an occult-looking crystal in his hands.” Shortly before leaving, Marlin had taken up dowsing — a form of divination — to try to reach his dead father.

Six months prior, in January 2018, after traveling to Malaysia for the funeral, Edwina and Marlin encounter hostile border agents when they return to the U.S. Under the Muslim ban, the couple is regarded with suspicion because they hold passports from a majority-Muslim country — though neither is Muslim.

Marlin is eventually led away to a holding area — with Edwina following — where his immigration status is reviewed. Edwina suspects he has been singled out due to his darker skin. Though eventually cleared to reenter the country, Marlin feels that his life in the U.S. has been tainted by the episode. Later, he admits to being homesick and asks Edwina, “Don’t you remember how they treated me at JKF? Like a suspect, that’s what. A potential source of evil or something. Maybe that doesn’t mean anything to you because you weren’t the target.”

Edwina recognizes the challenges of being an immigrant; her experiences growing up in Malaysia have prepared her well:

“I already knew how to be a minority in America, having been one in my home country. All that was required of me was to learn my new names, like kook or dirty commie or terrorist, and to understand what I was expected to do, such as eat dogs and cats alive. Some of the names I’d already acquired in Malaysia even translated abroad like a universal plug — an engineer might appreciate the portability of an insult like ‘Sepet,’ which means ‘Slant-eyed,’ applicable to me in various countries around the globe.”

Having been “born into diaspora,” Edwina knows no other way of living:

“One other thing remained constant — the exhortation to Go back! Except the destination had changed. In Malaysia I was supposed to go back to China. In America I was supposed to return to Malaysia. Was this progress? If I moved to China, would they tell me to piss off to America, thus resulting in some sort of infinite loop?”

Author Chin is at her best when describing the immigrant experience, the layers of belonging, the complexity of diasporic communities. In contrast, the love story at the center of the novel — Edwina’s crumbling marriage to Marlin — is thinner and less compelling. Marlin is already gone when the book begins, and the flashbacks do not adequately flesh him out. Edwina’s own internal struggles about what she wants in life are more vividly drawn than her longings for the ghostlike Marlin. Her struggle over loving or leaving America feels much more visceral and central to her future:

“I juggle forked lives in my head: an intense love for the great nation of the United States should my green card come through, and a heavy loathing for this uncaring, capricious machine of a country should I fail to be legalized. It is an ice cube that never melts on my tongue, and every hour I turn it this way or that, unable to let it sit in one position for too long because of a burning freeze that builds up.”

Throughout the novel, Chin makes excellent use of tech and engineering terms as metaphors. The book’s title is a case in point. “Edge cases are rare situations or use cases that engineers might miss when they write code, resulting in ugly bugs,” Edwina explains. “It was simultaneously the engineers’ responsibility to anticipate these edge cases and the bread and butter of my job as testing analyst to catch them.”

But Edwina’s dedication to her job is challenged when she begins testing the robot itself and is offended by some of its jokes. (“Why does the bride wear white?” it asks. “Because the dishwasher should match the stove and the fridge.”)

She wonders: “Had a single nonmale person tested AInstein until today?” When she tells the engineers that “some of the jokes in our database might be sexist, racist, or offensive in other ways to subsets of users” and proposes a “human audit of all the jokes,” they dismiss the idea as “inefficient” because “having a human flag things at all defeats the whole purpose of our tech!”

In the end, Edwina’s objections are disregarded, the issues she raised declared “edge cases that are outside of the scope” of the first release. In other words, she herself — and her perspective as an Asian female immigrant — is an edge case. But her voice from the edge — perceptive, funny, introspective, smart, wry, calling to us from the margins — is one worth listening to.