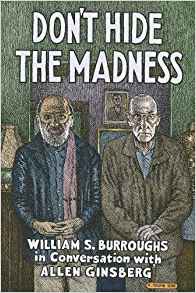 Early in Don't Hide the Madness, William S. Burroughs gives Allen Ginsberg a piece of advice. Never get into an argument with the Devil. He always wins.

"Is that a trick photograph? Of a two-headed guard dog bred by cops," asks Ginsberg.
"Oh my God look at that," Burroughs says.

This is the sort of discourse that occurs when two of the founding fathers of the Beat movement are hanging out together for a few days.

In March of 1992, William S. Burroughs enlisted the services of a Navajo shaman, Melvin Betsellie, to perform an exorcism to extract “the Ugly Spirit,” a demon Burroughs believed led him to fatally shoot his wife, Joan Vollmer Burroughs, during a booze-infused game of “William Tell” on September 6, 1951, in Mexico.

The event had haunted him for four decades and also set his course to becoming one of most influential writers and cultural icons of his generation. In the introduction of his novel, Queer, Burroughs wrote, “I am forced to the appalling conclusion that I would never have become a writer but for Joan’s death...the death of Joan brought me in contact with the invader, the Ugly Spirit, and maneuvered me into a lifelong struggle, in which I have had no choice except to write my way out.”

The exorcism coincided with the upcoming U.K. release of “Naked Lunch,” David Cronenberg's film adaptation of Burroughs' seminal novel. Ginsberg agreed to visit his old friend and literary brother at Burroughs' Lawrence, Kansas, home for the purpose of conducting a short interview for the London Observer. Over the course of five days, March 18 to March 22, Ginsberg recorded the proceedings, amassing 11 90-minute cassettes with more than 16 hours of kaleidoscopic chitchat.

While a brief excerpt appeared in the Observer, Don't Hide the Madness: William S. Burroughs in Conversation with Allen Ginsberg, edited by Steven Taylor, marks, for the first time, the massive exchange bound in a single text. Taylor, a musician and poet, was asked by Ginsberg to transcribe the tapes following the Burroughs visit. When he completed the task, Taylor, who collaborated with Ginsberg for more than 20 years, had more than 300 pages.

Divided into 22 chapters titled in correspondence to the tapes, the book is a literal transcription reading like a very long play, or interview, as it were, with Burroughs identified as WSB and Ginsberg as AG. There are starts and stops and stutters, which may give readers a bit a confusion. But that is one of the charms of the work. As Taylor points out in his introduction, “What is given here is a casual conversation between friends and a formal, written text.”

As would be expected, there is much discussion among the participants of Naked Lunch — both the novel and the film — as well as other works that offer insight into the literary process and influences that draw in an array of authors and artists such as Jack Kerouac, who, along with Ginsberg, went to Tangiers to assist Burroughs with editing the novel, first published in 1959. And Brion Gysin, who introduced Burroughs to the cut-up technique which he applied to his writing:

WSB: Every time you look out the window or walk down the street, your consciousness is cut by random, seemingly random...
AG: OK, this idea of the collage or cutup being closer to perception, was that Brion's idea or your evolution and rationale for it?
WSB: Oh...both, both, both.
AG: I mean, you've extended the thought of it, elaborated the…
WSB: It is closer to the facts of one's perception. Life is a cutup. And to pretend that you write or paint in a timeless vacuum is simply...not...true...

While the book chronicles five consecutive days (Ginsberg handling firearms on March 20th is worth the price of admission), in some ways, Don't Hide the Madness is most entertaining from a cut-up approach.

Randomly open a page, and the reader will discover Burroughs and Ginsberg riffing and meditating seamlessly, endlessly, without segues — creating a dialogue that spiderwebs into myriad threads, roaming wildly into a forest of topics ranging from the power of buffalo skulls and the spiritual properties of peyote to preferred methods of soup preparation and the best way to eat a grapefruit. There's rarely a dull moment at the Burroughs house.

For aficionados of these two literary lights and the Beat movement in general, this is an illuminating artifact and essential addition to the collection.

Jason Tinney is author of the short-story collection Ripple Meets the Deep.