A radio reporter tangles with Middle-Eastern terrorists set out to blow up Nationals Park in Washington, DC. 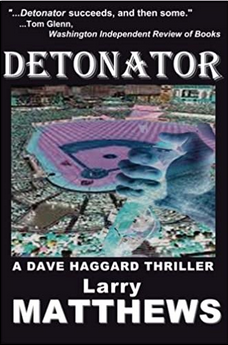 Bottom of the ninth, game tied, Nationals at bat. If the batter hits a homer, a fireworks display will celebrate the victory. The batter sends the ball sailing into the night sky. A suicide bomber with a wireless detonator watches the ball. He’ll blow up the stadium as the fireworks start. Thus begins Detonator, the third in the Dave Haggard thriller series.

Back with Dave, a reporter for Now News radio, are two cranky, eccentric government officials we met in earlier capers, FBI special agent Bud Ossening and DC Police inspector Dan O’Neil. A new face in the mix is Patricia Gant, an FBI agent farmed out, like O’Neil, to a nothing job for bucking the brass. She is a headstrong African-American beauty, devoted to fighting the evil that killed her father on 9/11.

Ranged against this quartet are terrorists Ikram Ali Ghazali, a Pakistani, and his handler, Argun Maskhadov, originally from Chechnya, who start their work by twitting the capital region with periodic blackouts.

Early in the yarn, technological magic allows unidentified government agents — they sound a lot like NSA — to track Ghazali, who is recognized as a low-level operant. Pretty soon, CIA and Homeland Security are tailing him, waiting to snatch his handler. But Ghazali evades his followers and, driven by religious fervor, prepares to sacrifice himself in the explosion that will destroy Nationals Park and everyone in it.

What made me sweat as I read Detonator is its realism. I could smell DC as I moved from chapter to chapter. Matthews, himself a seasoned journalist, knows the Washington area, the federal government, and news organizations. His up-to-date detail on streets, restaurants, monuments, parks, and buildings in an area ranging from Ocean City, Maryland, to West Virginia gives the milieu the ring of truth.

His portrayal of the success of government entities — because of the determination and patriotism of civil servants, and despite the drag of bureaucratic rules and the failure of agencies to cooperate and share information — is painfully accurate. And the mixed cynicism and passion of journalists and news organizations breathes life into the narration. The story feels like here and now, in no small part because of references to today’s events (like, for example, the progress of the Islamic State in Syria and Iraq).

And Matthews weaves real journalists into the story. The game at Nationals Park is being called by Charlie Steiner, a voice so many of us know. Early in the story, NBC 4’s Wendy Rieger interviews a power company executive about the unexplained outages Ghazali has triggered. Haggard brokers a deal with WTOP’s Dave McConnell to share background information. And, finally, we meet longtime broadcaster Johnny Holliday.

The characters in the story come across as real people, blessed with determination and impeded by personal liabilities. Typical is Dave himself. He is restless in his recuperation (from a bullet wound in the second Dave Haggard thriller) at the beach, yearning to return to the life of a reporter. He sacrifices his relationship with the woman who has given up everything for him and almost succumbs to his addiction to alcohol in the middle of the book. I found it rewarding to read a thriller in which the characters, not the plot, drive the story.

That story moves fast. Matthews gives just enough background to keep us anchored and offers sparse detail that instantly orients us to characters, locations, and situations. Like the characters, the book’s writing crackles with good-natured skepticism. The dialogue is quick and sardonic. The pace picks up as the denouement nears. The tension grows and the action speeds as the crowd in Nationals Park becomes more excited with the ball game and the government rules out evacuating the stadium for fear of creating panic.

For all that, Detonator is not flawless. Ghazali’s false identity is Juan Gutierrez, a Mexican tourist. The text so often referred to Ghazali as “the man who called himself Gutierrez” that I began to watch for the phrase rather than following the story. And toward the end of the book, so many government agencies are involved in the chase that their sheer presence slowed the action. Almost out of necessity, the chapters are short and punchy as the point of view moves from character to character. I would have liked a more protracted narrative with fewer than the 51 chapters (plus an afterword).

But I recognize that these are as much personal preferences as they are criticisms. More to the point is that Detonator works. The ending justifies all the tension built earlier, and that’s what a thriller must do to succeed. Detonator succeeds, and then some.

Tom Glenn’s Vietnam novel-in-stories, Friendly Casualties, drawn from battlefield experience, came out in 2012. This year, Apprentice House of Baltimore published his novel No-Accounts, and will bring out his next novel, The Trion Syndrome, based on his bouts with Post-Traumatic Stress Injury, late this year or early in 2015.