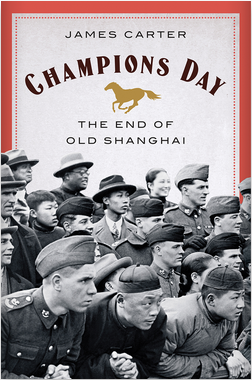 Anyone confused by the struggle over Hong Kong — the former British colony of Chinese people resisting Chinese control — could glean some insight from Champions Day: The End of Old Shanghai, the story of another Sino-British enclave that eventually reverted to native rule. In it, author James Carter offers a clear-eyed, nuanced view of colonialism that’s a useful contribution to today’s long-overdue reckoning with racism.

A big part of the bustling northern Chinese port city of Shanghai was a Western colony in all but name for a century, ending with World War II. Effective if not official sovereignty over the area was extracted by European powers and the United States from a decrepit Chinese Empire that had fought a losing war to block the import of opium.

Westerners in Shanghai and in several other Chinese cities were accorded “extraterritoriality,” meaning they were not subject to local law. In Shanghai, these immune expatriates, led by the British, governed themselves in what became known as the International Settlement.

Western banks and other businesses flocked to these specks of familiar culture on the Chinese coast; Shanghai in particular prospered and was soon a world-leading metropolis. Innovations like electricity and air conditioning arrived there not only before the rest of China, but before they were common in most Western cities.

Central both geographically and spiritually to “Shanghailander” society was horseracing. The Shanghai Race Club’s huge track and, by the 1930s, impressive Art Deco clubhouse in the middle of town embodied the settlement’s bold self-image. Champions Day was a twice-annual contest among horses who had won at least one other race that season. The winner was crowned “King of the Turf,” and its owner earned special prestige in Shanghai society.

Though their privilege derived from their separate status within China, Shanghailanders promoted themselves as a bridge between East and West. The race clubhouse and other prominent architecture in the city blended European and Asian details; the women’s flamboyant fashion on display on Champions Day would have shocked an upper-class European race crowd.

Even the animals circling the track were different: Rather than statuesque thoroughbreds, the elite of Shanghai raced diminutive “China ponies” of unknown parentage shipped in from Mongolia and sold at local auction. Photos show proud owners taller than their prized mounts, the jockeys’ feet almost touching the ground.

The International Settlement’s merging of all things Western and Chinese found ultimate expression in its multiracial residents. The book offers an enlightening discussion of the complex cross-currents of biology, economics, and national identification that resulted in a mix of status for Shanghai’s mixed-race citizens.

Despite its exotic flavor and occasional lapses of prejudice, Westernized Shanghai in the main clung tight to the racism that undergirds colonialism. Though Chinese fans made up the bulk of attendees and bettors at the races, they were excluded from membership in the Race Club.

Meanwhile, there was another Asian nation challenging the assumption of white supremacy: Japan had transformed itself in the space of a few generations from medieval backwater to industrialized powerhouse. Its meteoric rise allowed it to go from colonized to colonizer, throwing off “unequal treaties” imposed on it by the West and joining in the group of foreign nations imposing them on China.

Then, in the 1930s, Japan’s militarist government went further, invading large sections of coastal China. Because Japan was not yet at war with the West, it didn’t touch Shanghai’s International Settlement, turning it into a “lone island” of peace in a war-torn world. There’s a remarkable photo in Champions Day of settlement residents on their rooftops observing the Japanese attack on native Shanghai, like race fans at the track.

Though Japan tried to spin its aggression as pan-Asian resistance to European colonialism, its brutal occupation — notoriously exemplified by the “Rape of Nanking” — belied any idea of racial solidarity. The population of Westernized Shanghai swelled in these years as native Chinese flowed into the International Settlement to escape their Japanese overlords.

Despite the crowding, inflation, shortages, and even occasional inadvertent bombing, the exuberant life of the Shanghailander — including, adamantly, horseracing — went on. The “end” referenced in the book’s title only came when Japan’s attacks in December 1941 on the Pacific holdings of the Western powers, including America’s Pearl Harbor, swamped the lone island.

Carter’s fluent prose evokes the stylish colonial era without ever whitewashing its devastating impact on people of color. He provides several memorable images and phrases: in its isolated war years, Shanghai being like a sawed-off tree limb that “stayed in place, defying gravity”; the Race Club dealing with a competing Chinese track in a way that was “quintessentially Shanghai: cosmopolitan, racist, pragmatic, cooperative and cynical all at once.”

Still, the book’s theme of East meets West is noted too often, and sections dealing with a multitude of hard-to-keep-straight characters drag. And, though well crafted, the detailed descriptions of decades-old horse races will grip only the most dedicated railbird. A few editing and historical errors have crept in, too, such as implicitly downgrading Japan from nation to city.

But these are small matters. We are all now being reminded that race relations is a deeply layered phenomenon. By excavating one of those layers for closer examination, Champions Day adds to the vital discourse.

Laughing Shall I Die: Lives and Deaths of the Great Vikings