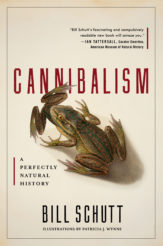 The very word “cannibalism” sets off a traumatic alarm in us, says zoologist Bill Schutt. If, say, a paleontologist discovers what he suspects is fossil evidence of one dinosaur gnawing on the bones of another from the same species, he can call it “conspecific scavenging” and excite the interest of pretty much nobody.

But call it dinosaur cannibalism, and the eons-old "news" goes viral.

In fact, cannibalism is fairly widespread in the non-human animal kingdom, including, one of Schutt’s scientist sources says, in some species that had previously been considered to be herbivores, such as butterflies. It's nature's way of dealing with “too many kids, not enough space, too many males, not enough food.” Thus the title of his fine, entertaining book, Cannibalism: A Perfectly Natural History.

The first third of the book, which focuses on non-homo sapiens, is of most interest to lay readers for its offering of relatively unknown information. For one example, in an avian species native to the West Coast of the United States, acorn woodpeckers, two females share one nest. They destroy and eat each other’s eggs, one after another, sometimes for weeks — until each one lays an egg on the same day. (The evolutionary purpose: One hatching cannot, therefore, too quickly outgrow the other.)

Another practice that separates some animals from humans — or most humans, anyway — is the chewing off of body parts during sexual mating. As Schutt shows, one such animal, the male Australian redback spider, engages in remarkable contortions to deliver his sperm to the female. Thereafter, she eats him, but his genes get passed on, which must be (what else could it be?) the point. The male’s acrobatics would be hard to fathom in mere words, so Cannibalism includes an excellent six-step schematic that makes the matter clear. (There are a number of such fine pen-and-ink drawings in the book.)

Much of the book concerns human cannibalism and specific historical instances — or supposed instances — of it. As Schutt demonstrates, Christopher Columbus and his contemporary Spanish governors wrongly reported that many of the native peoples he encountered in early expeditions to the Caribbean were cannibals. This permitted the Europeans, under the prevailing mores of engagement, to enslave or kill them. In fact, this emphasis on cannibalism allowed the genocidal treatment of the natives to be all but ignored for 500 years in, as Schutt says, "a terrible disservice to history."

(Indeed, current anthropological thinking says that, throughout history, ritual cannibalism has been practiced by fewer cultural groups than was previously thought.)

There was nothing made up about the cannibalism during the months-long ordeal of the Donner Party of 1846-47 in the American West. The logistics of that episode — who ate whom, when, and where — are still being debated and investigated. (Dogs are renowned for their sense of smell — still, it is amazing they can sniff out buried human remains from over a century before, as a border collie, Kayle, does to open Schutt's chapter on what he calls "The Worst Party Ever.")

There is something in human nature that almost makes any discussion of cannibalism the subject of humor, and Schutt is a talented writer, quick with the apt pun, as he showed in an earlier book, Dark Banquet: Blood and the Curious Lives of Blood-Feeding Creatures. (Despite the topics, both that book and this one are perfectly safe for the squeamish.)

Other Cannibalism subjects include the presence of it in our literature (such as fairytales, Shakespeare, Robinson Crusoe, and "The Twilight Zone" — who can forget that To Serve Man is a cookbook?); as well as the consumption of placentas.

(Schutt's final topics, diseases such as mad cow and kuru, which results in the destruction of the central nervous system, and which may or may not be related to cannibalism, are a tad tangential and technical.)

Our fascinated horror with cannibalism goes back a long way; it might even seem innate. On the other hand, Schutt says, it may be merely cultural. Herodotus tells the story of the Persian king, Darius, who asked some Greeks if they would eat their dead fathers: They were horrified at the idea. Next, he asked some Callatians, an Indian people who engaged in just that practice, whether they would burn their fathers' bodies on a pyre (as the Greeks did). They were similarly horrified.

This notion of ambivalence is part and parcel of Schutt's book, as reflected in the subtitle. "Cannibalism makes perfect environmental sense," he says, and the only beings who are ashamed of it, the only ones who consider it unnatural, are the human ones.

By Rob Sand with Reid Forgrave