This propulsive, kaleidoscopic myth will keep you turning pages until the very end. 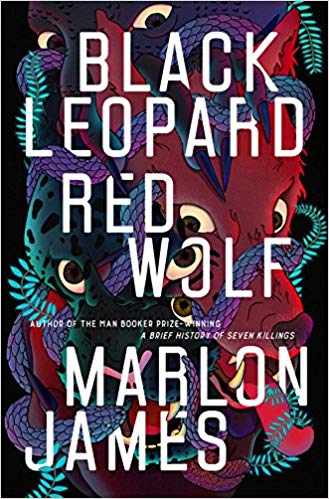 Black Leopard, Red Wolf begins: "The child is dead. There is nothing left to know." What follows is more than 600 pages of things I loved getting to know. Marketed as the African Game of Thrones, I found Marlon James’ new novel to be a wonderfully immersive experience, akin to being dropped into a foreign land and left to figure out the rules of this new world on my own.

Tracker is famous for his nose. He can follow a smell across hundreds of miles through magical portals known as the "ten and nine doors," into the realm of the dead, or even into the Mweru, from which no man ever emerges. No matter to what foul place a smell goes, or what foul company it keeps, Tracker will find it — or, more specifically, the person to whom it’s attached. Tracker finds people who are missing, whether they want to be found or not.

Cue the lost child. Given the brutality of this ancient, mythological Africa, what makes this particular boy special? Tracker is hired by a slave trader who only reveals part of the story. He also hires eight others — a motley assortment of thieves and liars who also happen to be giants and witches and shape-shifters — to find the boy in an attempt to hedge his bets.

Plus, there's the man who was directly responsible for the loss of Tracker's eye, as well as Leopard, who turns into his namesake big cat with less and less frequency the further he pushes Tracker away. Love is hard won in this novel, and Tracker spends the majority of the time hiding his true feelings.

The moment the group sets out, there is dissent. Some go off on their own; the rest stay with Tracker and Leopard, only to be beset immediately by the Zogbanu, a race of trolls from the Blood Swamp. There is a thinning of their number and a month lost to the Darklands, but when they regroup in Kongor, it is apparent they have been set up and that there are other, darker forces looking for the boy.

The pleasure of the novel is not necessarily in following the plot that we see; it's uncovering the things we didn't see. Or the parts that were purposefully left out. From the beginning, we know Tracker has been arrested for the murder of the boy, and this entire tale is being told to his unnamed and unseen inquisitor.

This set-up gives the story room to swivel in time when needed and to jump ahead when something is too painful for Tracker to relay. It also gives the novel a conversational style, much like words spoken aloud in Tracker's inimitable voice. We feel close to Tracker, but also kept at a distance (as is surely intentional) as he metes out information to his inquisitor. There is misdirection and contradiction and full-on obfuscation as he seeks to protect those who mean the most to him.

As we attempt to figure out the truth of Tracker through the stories he reveals, he's busy trying to understand the truth of the missing boy. With the help of Mossi, a prefect in the Kongori army, he discovers that the origin of the boy may change the North Kingdom forever.

It seems the boy threatens the king, Kwash Dara, in some as-yet-unseen way, and the king has sent his most-feared chancellor, the Aesi, after the mercenaries. Given the Aesi’s ability to control minds and enter dreams, Tracker and what remains of his crew are not safe.

The relationship between Tracker and Leopard is one of the most interesting aspects of the novel, and I found myself rooting for them throughout. But it is Mossi with whom Tracker has the best chance of finding what resembles love in this tattered land.

As they attempt to stay one step ahead of the Aesi, they uncover the true horrific nature of the boy's kidnapping and the ungodly company he now keeps. By using the "ten and nine doors," they may have a chance to find the boy, but will he be the same now that he has been used for sinister purposes?

Black Leopard, Red Wolf is as dark and pulsing as blood from a fresh wound, nearly bursting with tragically flawed characters and some of the most truly musical dialogue in any book, fantasy or otherwise. As Tracker moves from village to village, the secrets become more harrowing, and it seems that, everywhere, children are in trouble.

And the very notion of what it means to be a man is tested. Tracker hides his love, pushing away what he cares about. He wields his braggadocio as a shield, and his tongue is as powerful as his nose: "All men are cowards, and men together only added fear to fear to fear."

But that's only half the story. The most fascinating part of Black Leopard, Red Wolf is the transformation of Tracker and how he goes from searching for a missing boy to wanting that boy dead.

[Editor’s note: Marlon James will speak at Sixth & I Historic Synagogue in Washington, DC, on Feb. 6th, at 7 p.m. Click here for details.]

Josh Denslow’s debut collection, Not Everyone Is Special, will be published in March by 7.13 Books. He plays the drums in the band Borrisokane and edits at SmokeLong Quarterly.