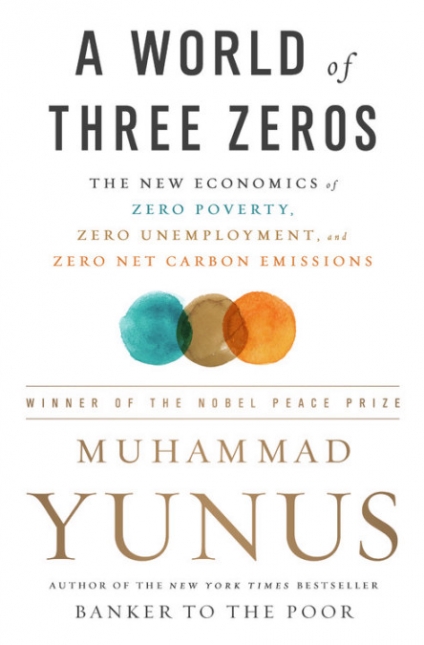 Muhammad Yunus wants us to know that capitalism is doing just what it is meant to do: create and concentrate wealth. But in his book A World of Three Zeros, Yunus advocates rethinking the basic tenets of capitalism, given that poverty and unemployment demean so many, and that climate change threatens so much.

The Nobel Peace Prize winner, known for his creative solutions to alleviating poverty, questions Adam Smith’s assumption that a “human being is basically a personal-gain-seeking being” and asks us to consider the social dimension to the decisions and investments we make. He lays out a new framework, supported by his own successful economic experiments, for better tapping human capital to solve the world’s problems.

The author’s basic premise is that “people are both selfish and selfless, and that both motivations can be applied to economic activity.” He notes:

“The central problem with capitalism as it is now practiced is that the system recognizes only one goal — the selfish pursuit of individual profit. As a result, only businesses designed around this goal are recognized and supported. Yet millions of people around the world are eager to pursue other goals, including elimination of poverty, unemployment, and environmental degradation. All three can be dramatically reduced if we simply begin designing businesses with these goals in mind. And that is where social business plays a crucial role.”

A social business, as defined by Yunus, is “a non-dividend company dedicated to solving human problems.” Investors who provide the capital to launch these businesses receive back their initial investments only. After the investment amount is paid back, profits from these companies are plowed back in and used to expand their services or products so more people can benefit. Unlike nonprofit organizations, there is no need to constantly apply for grants or fundraise because social businesses are “designed to create revenues and thereby become self-sustaining.”

Yunus makes clear with many examples that solutions are available and ready to be applied and expanded in both developing and developed countries. “For too long, we’ve tolerated the persistence of poverty, unemployment, and environmental destruction, as if these are natural calamities completely out of human control, or, at best, unavoidable costs of economic growth. They are not. They are failures of our economic system.”

His efforts to address unemployment center on entrepreneurship. He asks us to consider what would happen if we directed young people from the hunting for jobs, in which too many are unsuccessful, to creating jobs for themselves and others. And what if we made it much easier to do so through institutions designed to provide equity financing based on business ideas and not on the typical requirements that the poor or youth can’t meet?

He criticizes the messages we send to our children:

“No job, no life — this message is sent loud and clear from every direction: home, school, media…When you become an adult, you offer yourself to the scrutiny of the job market. A job is your destiny. If you miss it, you show up in the bread line. Nobody tells young people that they are nature-built to become entrepreneurs rather than waiting in line to get hired.”

His framework is thought-provoking and has real potential to make a difference, but his strong political views and anti-capitalism rhetoric are likely to turn off some readers. For example, “The top 1 percent will find they have fewer people at their service. All the micro-entrepreneurs who are busy running their own businesses will no longer be available to work for the 1 percent as mercenaries.”

The book is inspirational, but it becomes repetitive if you’re reading for recommendations, and I wanted to learn about what institutional framework would be needed to implement the author’s models. Chapter 10, “The Legal and Financial Infrastructure We Need,” provided those recommendations. And I was surprised (and somewhat relieved) to read that what Yunus proposes, with changes to laws and regulations, could easily sit next to existing systems in most countries — developed and developing.

The topic and the engaging stories of success should interest all types of readers. I would make it required reading for high school and college students; they are at a good age to question systems that are not serving us as well as they should be.

A system wherein just eight people (Oxfam’s announcement in January 2017) own combined wealth exceeding that of the bottom half of the world’s population is due for a tune-up, if not an overhaul.

Linda Nemec, who once chatted with Dr. Yunus on a flight from Tashkent to Almaty, is an economic-development practitioner, analyst, and observer. She is vice president of Nathan Associates, an economic consulting firm established in the 1940s by Robert Nathan, an economist at the U.S. Department of Commerce involved in the creation of the concept of GDP.