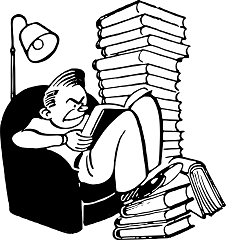 I am reluctant to spout generalities, but it seems to me that people who don’t read books tend to be easy prey for conspiracy theories. At least that has been my experience in Naples, FL, where I live, and which tends to be a conservative bastion.

Now, I have no problem with conservatives per se. Many are my friends, at least until they stop conceding my putts (that goes for liberals, too!). But the “Cons” I avoid are usually those who brag that they don’t read books. And they apparently glean all their “facts” from the internet, as long as those facts don’t originate from the “deep state.”

I kid you not. I have one acquaintance who is constantly sending me emails with attachments to videos or articles from “experts” whom no one has ever heard of. Now, I am as suspicious of expert opinion as the next person (forget the MyPillow guy; have you seen the TV commercials for toothpaste or muscle pain lately?).

But when some guy wearing a white coat in what looks to be his basement tells me that global warming, covid, etc., are hoaxes, I draw the line.

Of course, some liberal or moderate friends of mine don’t read much either, but I tend to give them a slide because it’s obvious they have absorbed some common sense from hanging around me (and conceding putts, even when my golf ball lands in another zip code).

As I’ve said before, I also believe that people who don’t read can’t be good novelists. Not that I claim to be a good novelist. I am certainly prolific, but so are rabbits. Nevertheless, I do read a lot, and I thought I might tell you what I am reading now or have just read.

Putting the Rabbit in the Hat by Brian Cox. Cox is a Scottish actor best known now for his portrayal of patriarch Logan Roy in “Succession.” But his face has been familiar to moviegoers for years, and his love of acting (the Bourne franchise comes to mind) is palpable. He joined the Dundee Repertory Theater at 15 and never looked back. His autobiography is funny and sad and a great history of stage and film acting over the past 60 years. An incredibly hard worker, Cox never met a role or an actor he didn’t like.

Taste: My Life Through Food by Stanley Tucci. Another great actor and a foodie par excellence. The recipes and travel descriptions are fabulous, but I was stunned by the friendships Tucci has made over the years. And some of those friends, famous in their own right, were there for him during his most trying times, which included the death of his beloved first wife and a cancer that robbed him, of all things, of his ability to taste and eat! Married now to Emily Blunt’s sister, and having won his battle with cancer, Tucci is one tough hombre.

All About Me! by Mel Brooks. He’s 95 now, and he’s been making people laugh since childhood. A WWII veteran whom Sid Caesar thought was hilarious (enough said), Brooks acted and directed in some of the funniest (and most irreverent) movies ever made — “Blazing Saddles,” “Young Frankenstein,” “Spaceballs,” and “High Anxiety,” to name a few. He made great friends along the way, and married the love of his life, the late, great Anne Bancroft (aka Mrs. Robinson). It’s all here in this marvelous book, and I can’t go into more detail because I’m laughing just thinking about it!

Making History: The Storytellers Who Shaped the Past by Richard Cohen. From cave paintings on, humans have been trying to tell the stories of the past. Cohen brings historians (and writers of novels who lived at the time) to life. Alternately profound and funny, this is a great book.

We Don’t Know Ourselves: A Personal History of Modern Ireland by Fintan O’Toole. Engrossing, especially about the scandals that ended the Catholic Church’s control of Irish politics. The descriptions of hypocrisy and brutal workhouses, where generations of “bastards” were ostracized and brutalized, are frightening. But there is also beauty in this memoir. I highly recommend it.

A final thought. Being well read can present a problem for a novelist. The eyewitness accounts of Russian atrocities in Ukraine, which I read in USA Today and the New Yorker, are so disturbing that I considered changing some of the Russian characters in my novels. I didn’t, though, since they are Russian Americans with a distaste for Putin.

Lawrence De Maria has written 26 thrillers and mysteries on Amazon, and soon all will also be on Nook and Kobo. He is almost finished with his 27th novel, tentatively titled Absent Dead. He currently has rabbits on the brain since the lawns in his community are overrun with bunnies.