Part 1 of a scintillating four-part series… 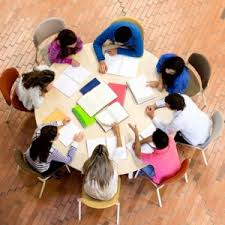 I have the best writing group on the planet. It’s a fact of nature. The only way it could possibly get better is if Margaret Atwood, J.K. Rowling, and, say, Stephen King decided to join. But barring that unlikely circumstance, mine’s the best. Group. On. The. Planet. Seriously.

So I might be a little biased when someone asks, “Do you really find writing groups useful?” Yes, yes, I do. And here’s why:

Trolls are no fun to be around. When I write my first drafts, I withdraw from friends, family — society in general — and hole up in a tiny corner of our house that we generously refer to as my office. If I’m really into the writing, I may forget to eat, pick up the kids from school (I swear, it’s only happened a couple of times!), or even how to vocalize anything that isn’t related to my story. My husband lovingly refers to this as my troll stage. He does a brutal — but accurate — imitation at parties.

But at some point, I have to come out from under the bridge and show someone my work. My mom doesn’t count — she HAS to like what I write because I’m her special snowflake. Or she’s savvy enough to lie convincingly so I won’t know the difference.

This is where my writing group comes in handy. Not only do they offer me treats for coming out from under the bridge — cupcakes are my favorite — but they take the time to read and comment on my draft. While this can be nerve-wracking, especially if I know a particular storyline or character is weak, I will walk away from the workshop feeling like I have a better grasp of exactly what needs to be fixed.

Very often, my group will also suggest specific fixes to those problems. And as much as I’d like to think I can catch all the flaws in my own work, I can’t. They help me become a better writer, and that’s exactly the payoff I need to crawl out from under that bridge.

But isn’t a camel just a horse made by committee? Um, no. They aren’t even in the same genus, dude. Oh, you mean my work might become something I don’t recognize once my group gets their icing-covered little fingers on it? Well, sure, it could happen. But I don’t think it does.

The members of my writing group don’t write my pages for me. I do that with my blood, sweat, tears, and eventually a whole lotta ink. They do give me their opinion and will suggest changes. Sometimes they come up with fantastic insights to help highlight my theme, or they might point out that every character in my story starts with the letter “N,” or that I have a plot hole you could drive a hummer through.

Do I take all their suggestions? Of course not. Ultimately, it’s my work, and I have to decide what I change and what I keep the same. That’s on me. As it should be. However, if my group members unanimously tell me they hate my main character and hope he gets run over by that Hummer because this would be the absolutely funniest thing to happen in my comedic novel, I might want to listen to them. It just may be that if they see a problem, an editor, publisher, or agent will see a problem, too.

But what about when you’ve put a lot of work into a draft and they tell you it sucks? First, off, let me assure you that has NEVER happened to me. And if it has happened to you, then you are with the wrong writing group. Run away as fast as your writerly legs can carry you. I’m completely serious.

My writing group has told me that a story didn’t work for various reasons (wrong POV, overarching structural suckatude, etc.), but the members have never belittled anything I’ve written. Never. Because that would belittle me.

That doesn’t mean they love everything I write and are just there to bolster my ego. Hey, I told you, I have my mom for that. My writing group is not a support group, although they can certainly be very supportive. We are a group of people who want to be published, who want our stories to be as good as we can possibly make them.

And for those of you in groups who whine, “But I’m just being honest.” No, you’re not. You’re discouraging someone from doing what he or she loves. We all started out worse than we are today, and we hope tomorrow we’ll be better than we are now. But to do that, we have to write. And write. And write. Making someone feel like he or she should never write again — even their name — is NOT being constructive. It’s mean. Petty. And goes against the very premise of a writing group. Don’t be that person. Don’t.

Be the person who helps the writer get better, be more, love language. That doesn’t mean you should lie, but never stoop to insulting a fellow writer’s work. It’s not your responsibility to write the pages for another, but when you join a writing group, you sign on to helping the members become the best writers they can be — even if they’ll never have a million-dollar contract or write the next bestseller or be an award winner.

Stay tuned for next month’s exciting installment: What Are Workshop Rules, and Why Do We Need Them?

Meg Opperman is a recovering academic. Her column appears monthly in the Independent.

Part 3 of a scintillating four-part series…

When Your Favorite Author Goes on Hiatus (Pt. II)