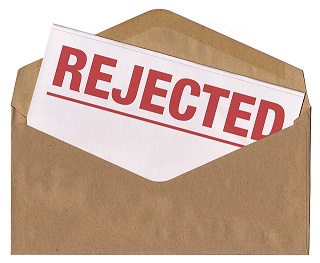 Nobody likes rejection. But as an adoptee, whose life essentially began with that first, traumatic rejection, I especially abhor it.

Which makes me question my sanity in my quest to be a published novelist. Perhaps only the aspiring actor is more exposed to constant, debilitating, degrading rejection. At least with writing, it’s not face-to-face rejection. Small consolation.

My rejections have come on small slips of paper, in form letters, through one-sentence emails, via long and thoughtful disquisitions, with harsh dismissals and regretful encouragements. Each one, no matter how admiring and gentle, leaves me feeling sad and dejected. And lately, extremely discouraged.

The very first agent I contacted wrote back to say my writing was "strained" and "overblown." Wow. Oh, and did I mention that she was a friend of my mother's?

For the most part, though, agents' rejections were of the "it's not you, it's me" variety. (My mother's friend was British, so maybe they operate differently, assuming that the writer will keep calm and carry on, and unafraid of karmic blowback.)

A few months later, I did procure "representation." The agent of the eponymous agency, however, never once contacted me directly; all interactions were with her associate. I never could really figure out if the associate was an agent in her own right.

She always said, "Agent and I think..." as if they were closely collaborating on my manuscript, but my suspicion that she was the only one who believed in it was corroborated when she suddenly left the agency (to publish her own novel, it turns out), and I was quickly dropped — via the intern.

Soon thereafter, I was picked up by my current agent, also with her own agency (now dissolved, but she immediately joined another firm — the world of literary agencies is quite volatile, apparently). She communicates directly with me and is wonderfully supportive. After a few tweaks here and there, she began to submit my manuscript to editors, many of whom had worked with giants of literature, including some of my idols.

Every time the phone rang, I imagined it was my agent calling to say that an offer had been made. Instead, the rejections trickled in. The main character was not sympathetic enough. The book was too long, with not enough action. (Never mind that it literally starts with a bang as a nuclear bomb explodes over Nagasaki.)

In all, about 25 editors were given a chance to work with me, and they all declined. I had to cling to my agent's assurances that many were "good rejections" (what an oxymoron), and a few were "close calls."

After my first manuscript failed, I decided to "write what I know." Famous Adopted People was the book I was born (or adopted) to write: honest, sometimes painful, often dark, but full of joy, as well.

Exploring themes of otherness, identity, geopolitics, and humanity's boundless capacity for subjugation, it is utterly unique, and yet deals with the universal human condition, a story that has been told since the dawn of culture: the hero's journey to accepting and understanding her powers and limitations.

I wrote it not only to add a genuine voice to the scant offerings of adoption literature, but first and foremost, to get it published. I thought it was thrilling, snappy, and eminently readable.

As with my first manuscript, there was praise for my writing, the story, the themes. But they didn't know how to market it. They were confused as to which "niche" it would belong. They felt the dark themes were too heavy for a book that started out as the carefree adventures of a heedless youth.

Not everyone bothered to praise it. One editor said it wasn't literary enough, another that she wanted "more economy in the prose," and several objected to that old bugaboo: the unlikable main character. What one editor liked, another did not. The messages were contradictory, but of course, especially in art, what one person likes, someone else hates.

The book is still out there with a few editors, but their responses have been so long in coming that hope, one of the most persistent and unreasonable of human emotions, has finally died in me.

I finished writing the novel a year ago. Since then, I have struggled to start another book-length project. I wonder, “What's the point?” Two books that I thought deserved publication did not find favor with the gatekeepers.

How can I have any confidence that the next one will fare any better? Why go through all the work, anguish, tedious research, endless revisions, pondering, and plotting just for another chance at humiliating heartbreak?

Why go through all that if no one outside my usual circle of readers is going to see it? Like a tree falling in the forest, if a book is written that no one reads, is it really a book? Or is it just the sound of one hand clapping?

I was sure I'd never write another novel again.

But lately, a little seed that had been germinating in the nether regions of my brain began to poke up its head. It's getting stronger, bigger, nourished by daily observations, current events, history, and other works of art. The roots have spread into my fingers, which are beginning to twitch over the keyboard almost involuntarily. What is inside me must come out.

Who knows? Maybe the third time's the charm.